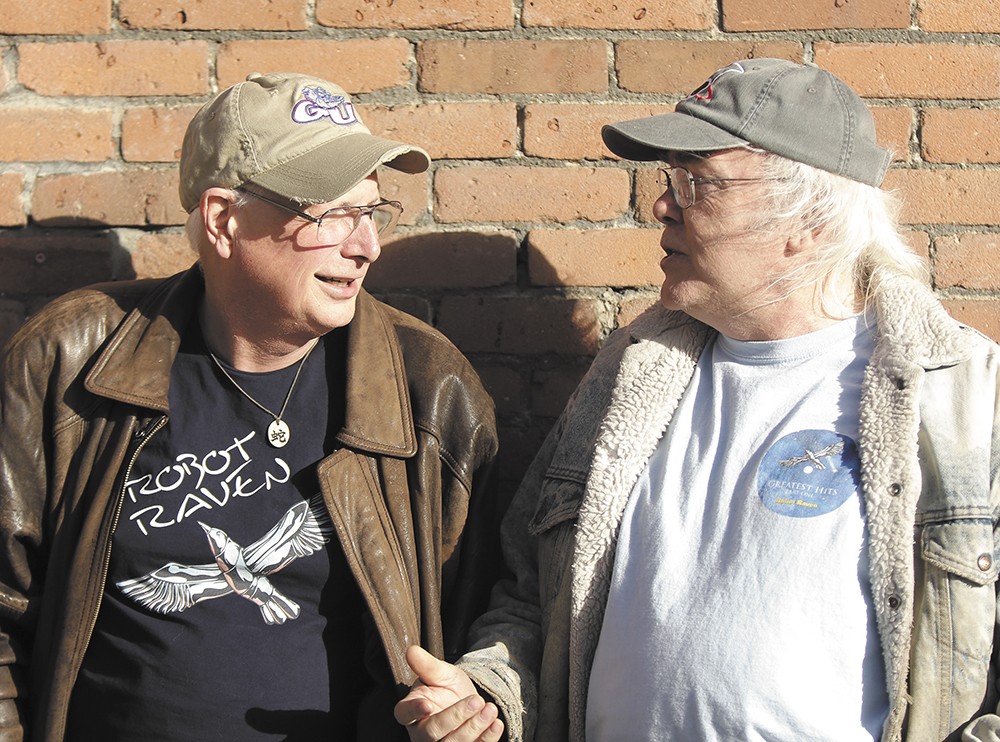 Young Kwak
Edmond Bruneau, left, and John Rigg of Robot Raven have been friends for 40 years.

In 1974, a longhaired Edmond Bruneau

envisioned being Eastern Washington University's next associated student president. He had the hippie vibe, but says it didn't make him cool. Instead, he enlisted John Rigg, his co-worker from Columbia Paint. Rigg had a rock band called Abiqua, and Bruneau thought an on-campus campaign concert might bring him some votes.

"I wasn't a part of a fraternity or anything, which meant I didn't win," Bruneau says. "But John and I are still friends."

Now, 40 years after that show, which Bruneau released a live recording of a few years back, the two have started a classic rock band together called Robot Raven. Bruneau writes the lyrics and Rigg does everything else — vocals, guitar, piano, bass, drums, recording and mixing.

"I'm the Bernie Taupin to his Elton John," Bruneau explains.

Today, with sun streaming into Lindaman's Gourmet-To-Go on the South Hill, the two explain why they only see each other a few times a year. Rigg hardly leaves his farm in Elk, Washington, where he also creates robotic machines, sold all over the world and even to The Big Bang Theory. He has thousands of robots, as well as some horses, and a bunch of recording equipment. Meanwhile, Bruneau is essentially retired from his advertising company, Creative Consultants, which he also used to write jingles for, hanging out on his Greenacres property he calls Raven Haven. The arrangement works for them because they have no desire to play live.

The act isn't opposed to performing, but they'd have to get some more instrumentalists, and that would take work. They say being a studio band wasn't all that unusual for rock acts in the 1960s and '70s. After all, the Beatles didn't tour in the final four years of their existence.

Through platforms like Facebook, ReverbNation (they're currently ranked No. 3 locally and No. 49 worldwide by listeners) and Internet radio site Jango.com, people all around the planet are exposed to Robot Raven's music.

"We know a lot of people in Spokane have never heard of us," Bruneau admits.

The group started last year after Rigg, who got back into writing and recording music in 2012, grew tired of making music alone in his 10-by-8-foot studio space.

"I needed another person, so the music wasn't just my ideas," Rigg says. "But didn't necessarily want to deal with the drama of a full band again."

He reached out to some of his musician friends via email, and Bruneau responded.

Together for about a year, the band makes fun of the fact they already have two Greatest Hits albums out.

"It's supposed to be a joke," Rigg says.

Each record has 18 tracks, ranging from psychedelic rock tunes to boot-stompin' country to British punk. There's even a bit of hip-hop. They explain that while their music borrows from classic rock bands — and that nearly every band out there influences them, including Adele — they are doing all-original stuff. They're not ripping off other acts.

"Our music doesn't get old," Bruneau says. "This is old, new classic."

The guys have faith in one another that writing separately will work out. Bruneau will send the lyrics to Rigg, who then composes the music. A poet, Bruneau says writing songs with a chorus, theme and basic time constraint is a completely different animal, and Rigg will call him out.

"If I can't sing it when I read it, then I know it's not going to work as a song," Rigg says. "I have no problem sending lyrics back and saying it sounds too much like poetry."

Bruneau says his words — covering love, politics, redemption and more — are pulled from life experiences, but that he's never afraid of getting too personal.

"People think they're special, that only certain things happen to them," says Bruneau, who lost his wife to cancer and in 2011 suffered a major heart attack. "And that's why nothing is off limits in songwriting. Even if I am writing about myself, it applies to other people, too."

Rigg points out that every track is recorded with real instruments and vocals. There was a time he wanted a violin solo for one track, and when multiple instrumentalists backed out, he learned how to play it himself.

Currently, the group is working on a new record, not a "Best Of" compilation. They'd like to have other people record their songs and be featured on TV and film soundtracks. They want their music to spark the Spokane music scene, they say.

"Currently, there's not a lot of good music out there," Bruneau says. "When this stops being fun, we'll pack it in. But for now, there's still music to keep making." ♦