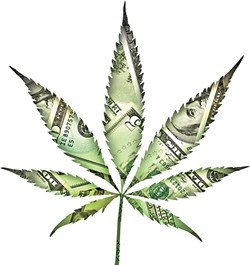 Recreational marijuana is legal in Washington, Colorado, Alaska and Oregon, and 25 states have approved it for medical use. But many producers and retailers of cannabis are forced to operate solely with cash. That’s because marijuana remains illegal in the eyes of the federal government, and because the feds regulate the country’s banking system, financial institutions have steered clear of pot-oriented businesses.

Although a handful of institutions, such as Numerica Credit Union, offer limited banking to pot businesses, it’s still a widely unbanked industry. Pot business owners have complained of having their bank accounts suddenly closed or having to take extra security measures to guard all their cash.

But Thursday the Senate Appropriations Committee passed an amendment on a 16-14 vote to the Financial Services and General Government appropriations bill that could change that. The amendment, sponsored by Oregon Sen. Jeff Merkley and Washington Sen. Patty Murray, is meant to stop regulators from prohibiting, penalizing or discouraging banks from offering their services to cannabis businesses that operate legally under their state’s laws.

“This amendment is really about providing clarity, stability, and security for our banks, credit unions, and small business owners who want to be able to operate in full daylight,” said Murray in a statement. “The people in my home state of Washington spoke in favor of marijuana legalization years ago, and as the voice for my state, I will continue to push to help legal businesses access banking services without the fear of prosecution.”

The text of the amendment prohibits federal “funds” from being used by regulators to punish or stop banks from working with cannabis businesses. Congress has tried similar tactics before to get the federal government to mellow on with limited success.

In 2014, pot-friendly members of Congress passed a similar amendment to a spending bill that prohibited federal funds from being used to "prevent" states from implementing their medical marijuana laws.

Notably, defense attorneys for the Kettle Falls Five, an eastern Washington family viewed as the embodiment of the disconnect between federal and state laws, argued in court that the act of Congress meant that the case should be dropped. However, prosecutors argued otherwise and secured convictions against most of the family.