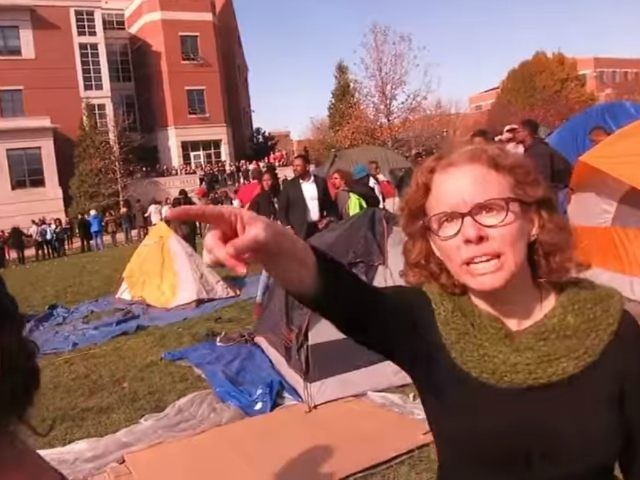 YouTube screencap
Melissa Click, pictured here yelling at a University of Missouri student journalist for covering a student protest, has been hired as a lecturer at Gonzaga.
For a moment last year, University of Missouri professor Melissa Click went viral. Not because of her scholarship — which includes papers on the "gendered reaction" to Twilight fangirls and "'Let’s Hug It Out, Bitch' HBO’s Entourage, Masculinity in Crisis, and the Value of Audience Studies" — but for her angry reaction to student journalists covering a Missouri protest.

Last week, the student newspaper Gonzaga Bulletin broke the news that Click has been hired as a lecturer at Gonzaga. This isn't the first time this year Gonzaga's been tied to a free speech controversy. While as a private university the First Amendment does not apply to Gonzaga, it still came under criticism for initially barring the public from attending the speech of conservative pundit and convicted felon Dinesh D'souza on campus. Gonzaga eventually relented.

Given that Click had become totemic for a lot of conservatives — and a few liberals — of everything that's wrong with the "safe space" culture on college campuses, Gonzaga's choice to hire Click again thrust the university into a national debate over academic freedom. A crowd of mostly conservative and libertarian pundits wrestled over whether Click's hiring was proof of everything wrong with academia or a welcome second chance for a woman who'd been the victim of an online mob.

The national eye had already been on the University of Missouri last year for the protests over racial inequity. But Click's behavior inflamed an entirely different section of the American public, with conservatives and libertarians outraged at Click's eagerness to try to suppress the student press. Alumni and even Missouri legislators called for her termination.

They got it. In February, Click was fired by the university. Her firing, the American Association of University Professors later concluded, jeopardized academic freedom.

Click painted herself as a victim, telling the Chronicle of Higher Education that her gender and white skin made her an ideal scapegoat.

Gonzaga's choice to hire her again made Click a target for criticism.


Professor Click is going to Gonzaga -- where they better have plenty o' muscle.


News of her hiring appeared on conservative aggregator Twitchy. The conservative American Spectator deemed it "another example of the absolutely broken hiring and reward system in higher education today, and the audacity of those who control it."

Robby Soave, at the libertarian Reason magazine, opined that, without clearer evidence of contrition, Click made a curious choice to teach in an area where she'd so evidently failed.

"How can it possibly be the case that she is currently the most qualified person to teach communications (of all things), when she doesn't even seem capable of learning from her own mistakes?" Soave wrote.


No, Dreher argues, she shouldn't even be teaching journalism.


@matt_a_glaser Sure -- but not teaching journalism. But then, II don't believe atheists should teach Sunday school.


But that reaction was not universal. Jack Shafer, Politico's media critic, encouraged mercy:


Everybody should get a second chance. https://t.co/7FKzhDjc4H

It's an argument that the Atlantic's libertarian writer Conor Friedersdorf has made before.

In our online outrage culture, he argued, we tend to turn real people into effigies of political beliefs. In February, he wrote, Click had become a scapegoat in the culture wars. What she did was awful, Friedersdorf wrote. But not exactly assault.

"After reading those stories, I suggested a new norm: 'We’d all be better off if Americans developed an aversion to people being fired for public missteps that have nothing to do with their jobs,'" he elaborated. "As long as the culture war rages on, we may as well agree to some rules of engagement that minimize the needless harm to innocents."

And Conor stuck to that belief: One awful moment shouldn't cost Click her career:

I agree. Melissa Click acted indefensibly that one time. Penalty should not be never teaching again. https://t.co/Ik9r0iln3Q


But Ken White, a Los Angeles defense attorney who blogs on First Amendment issues as "Popehat," was skeptical that Click's outburst was just a "one-time" thing.


@Popehat @jackshafer What are we betting on?


@Popehat @jackshafer to bet I would be on the opposite side of you; we'll see what happens!


Shafer didn't bite either, tweeting that "I will not bet that Click won't f—- up again."


I don't have that sort of criminal defense lawyer money to throw around! https://t.co/rXzBJwgAP5


But the she-deserves-another-chance argument cropped up in some surprising places. Here's former Breitbart writer John Nolte, not a guy known for his prudence and reserve:

She lost her job. Paid the price. She deserves another chance. Hope she's learned her lesson.


Meanwhile, freelance journalist Leah Sottile, former Inlander writer and former Gonzaga Bulletin editor, directed praise, not at her alma mater, but at the student journalists who broke the story.


Disappointed to hear my alma mater hired Melissa Click. Proud of the student reporters for doing this story. https://t.co/6ApZwrFKkN