In a new exhibit at the MAC, ancient culture and modern technology intersect for an immersive experience 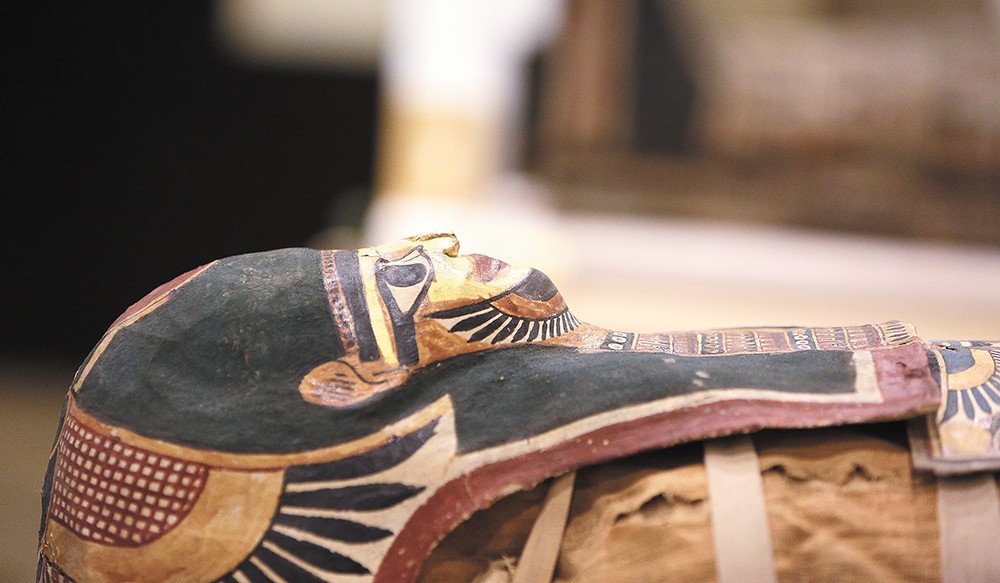 Young Kwak
The mummy of a teenage girl, known as Annie and who lived approximately 2,300 years ago, is the centerpiece of "Lost Egypt."

With history's help, we can begin to guess what Annie's life was like.

In her home city of Akhmim, Egypt, Annie could have been like any other teen on the cusp of adulthood; worried about her own future and the fate of her culture, perhaps in love, or reluctant to leave her family and marry. Yet the ancient Egyptian gods she believed in had other plans for Annie. The 17-year-old (her estimated age upon death) was instead ushered on into the afterlife.

Annie — short for "Anonymous" — has rested peacefully now for more than 2,000 years, her mortal body cradled in handwoven linen wrappings and adorned with an exquisitely detailed mask. Mummified in the ancient Egyptian tradition after her death, sometime between 300 and 200 BCE, and later excavated by archaeologists in the late 1800s, Annie is currently on display as part of the latest touring exhibit at the Northwest Museum of Arts and Culture, "Lost Egypt: Ancient Secrets, Modern Science."

The story of Annie's untimely death and her journey from Egypt to Spokane is as equally astounding as seeing her carefully preserved remains in the flesh.

"We don't know what happened to her personally, but what we learned from CT scans and X-rays, she appears to have drowned," explains conservator Mimi Leveque.

With the Peabody Essex Museum in Salem, Massachusetts, Leveque spent two weeks back in 2009 working to restore, repair and preserve the mummy before it went on exhibit.

Each time Annie is packed into a crate for travel, and when she arrives at the exhibit's next museum, Leveque travels to closely inspect the specimen for damage from transport. In the past six years since "Lost Egypt" kicked off, Annie and her coffin — a beautifully hand-carved and -painted artifact — have remained unscathed after 17 stops.

Produced by the Center of Science and Industry (COSI) in Columbus, Ohio, "Lost Egypt" features dozens of ancient Egyptian artifacts from the Brooklyn Museum's extensive collection. The exhibit's human mummy centerpiece is on loan from Philadelphia's Academy of Natural Sciences. 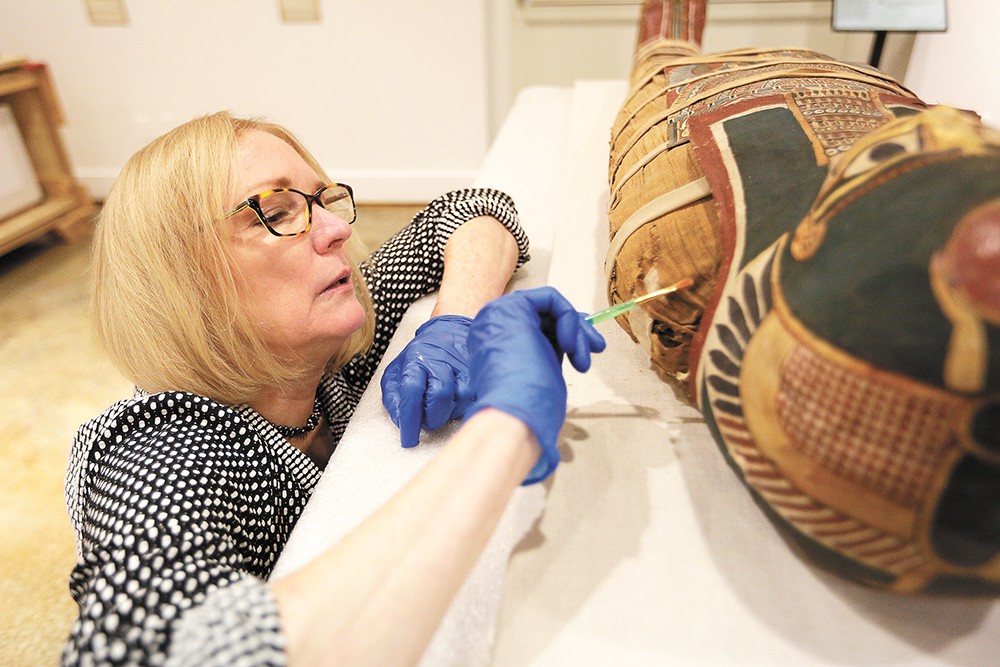 Young Kwak
Conservator Mimi Leveque restored Annie's mummified remains in 2009 so she could be featured in the exhibit.

"Lost Egypt" is designed to educate visitors of all ages not only on the fascinating history and customs of the ancient culture, but also the research processes and technological tools that allow us to still discover new facets of the lost civilization.

Interactive features, like a mock excavation site, let young visitors get a hands-on taste of what it's like to work on an archaeological site. Visitors can also marvel at displays of animal mummies and other funerary artifacts that were entombed with the dead and which the Egyptians believed an individual might need in the afterlife.

The blockbuster exhibit, open through Jan. 6, is one of many recent big bookings for the MAC as museum staff continue working to increase admissions numbers. After this glimpse of ancient Egypt, locals can learn about another lost era when "Titans of the Ice Age: Mammoths and Mastodons" stomps through beginning in February.

Forensic scientists and Egyptologists believe the unnamed teen drowned in the Nile River. Dying or being found deceased in the Nile was considered sacred, even though the embalmers and priests who prepared the body didn't know her name or her family history — evident by the lack of name on her coffin.

"It should have had an inscription saying who she was and what she did, but we don't know anything about her," says Leveque, who has been conserving mummies, animal and human, for 30 years.

"The ancient Egyptians felt that it was incredibly important for not just your body to survive, but your name as well, and in every instance where it was possible, mummies are labeled," she continues.

A long panel of papier-mâché-like material (called a cartonnage) down the length of Annie's body depicts colorful scenes of the gods and goddesses preparing her for the afterlife. The intricate designs were painted with mineral-based pigment, and Leveque says that means the colors are as rich and vivid as the day Annie was entombed.

While some may balk at the idea of this young woman's body — or any other mummified human remains — being displayed across the country, other ancient Egyptian specimens have had worse fates. (In this exhibit, Annie is respectfully placed inside a sheltered room, with placards outside explaining to visitors what's inside.)

At the time she was excavated from her tomb in Akhmim, Leveque says the Egyptian government was selling artifacts and mummy specimens to wealthy tourists. With the purpose of funding future excavations and a museum in Cairo, some of these mummies were brought back to Europe and the U.S. and unwrapped in morbid exhibitions with paying audiences. Annie, however, came into the Academy of Natural Sciences' possession in 1903, possibly even donated by her original buyer. Rediscovered in museum storage in the 1970s, Annie was not restored and conserved by Leveque for a few more decades.

While Annie's body was never intended to leave its final resting place, the young woman now serves as an ambassador of her ancient culture, educating and connecting us to a part of human history we're still trying to piece together.

"The most wonderful thing for me to realize is that we haven't changed as people for such a long period of time," Leveque muses.

"Here was a girl whose family loved her, whose town cherished her and who wanted to make sure that she lived forever... She was a girl with hopes and fears and all the same things we have now. It puts us in touch with this enormous range of our past." ♦