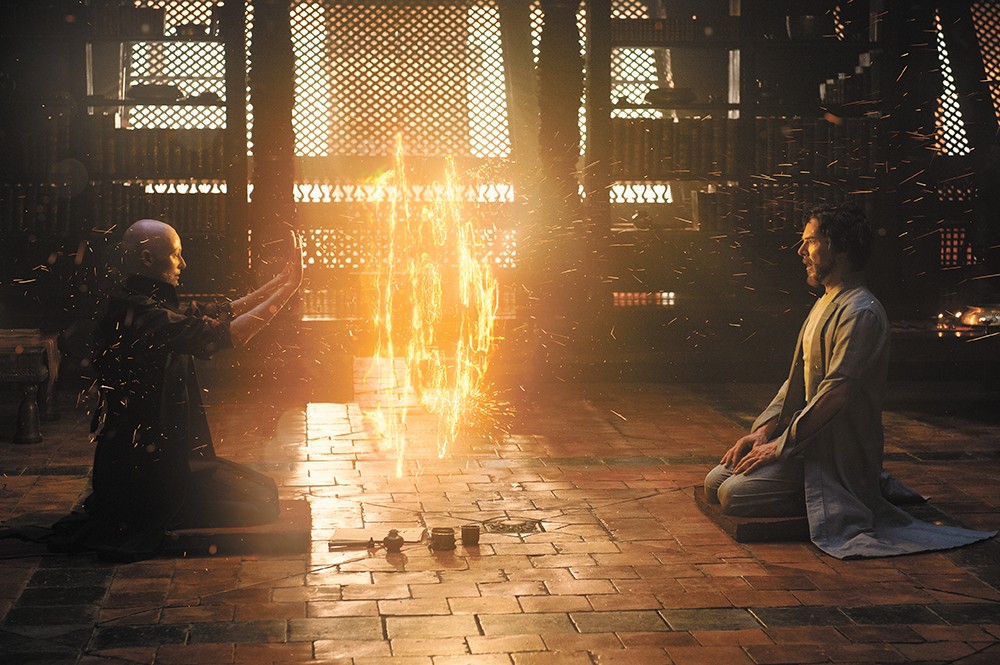 Forget everything you think you know," Chiwetel Ejiofor intones here, in that amazing voice that commands you heed him.

Alas, his planet-protecting wizard, Mordo, just wants you to forget everything you know about superhero origin stories so this one will (hopefully) feel fresh to you. Doctor Strange certainly looks different from all the other Marvel movies, which it exists alongside of, but even its differences are familiar. Worse, the film is busily jam-packed with CGI stuff at the expense of all else: there's a yawning emptiness where the emotional core should be. All that's left are the mechanics of getting a man from mere-mortal-hood to demigod-in-a-cape-hood, which are no longer terribly surprising.

Stephen Strange (Benedict Cumberbatch) is a New York neurosurgeon — Cumberbatch's American accent is distractingly terrible — and the usual clichéd combination of brilliant, arrogant and single-minded, which makes him very bad at coping when a terrible car accident leaves him with such severe nerve damage in his hands that he can no longer perform surgery.

His search for a cure leads him, improbably, to Kathmandu, Nepal, and a sort of spiritual martial-arts retreat called Kamar-Taj. Here, sorcerers the Ancient One (Tilda Swinton) and Mordo, her lieutenant, will teach Stephen all about using magic, though everyone — including Stephen — almost instantly seems to forget that this was supposed to be about Stephen fixing his damaged hands.

Stephen is just hungry for the knowledge, which is cool; a smart guy like him would be intrigued, even if he can't quite believe in the magic at first. But it's a much bigger problem if we cannot believe in the personal transformation Stephen supposedly goes through to wield the magic. He readily accepts that, just as it took him years of study and practice to become a neurosurgeon, so shall it require years of study and practice to master magic. Yet it seems like only mere months later that he has somehow shed his arrogance and become a world-class sorcerer, and there was no process to it: someone (lazy screenwriters?) just flipped a switch.

Now Stephen is a member of an organization that, the Ancient One explains, is kind of like a mystical Avengers: Iron Man and Co. protect Earth from physical threats, and Kamar-Taj protects Earth from more arcane ones. Kamar-Taj is all about "mirror" dimensions and "dark" dimensions and the "infinite multiverse," and all their chases and battles ending up looking like Inception dreams in The Matrix, planes folding up against one another in gravity- and logic-defying ways.

That looks cool, but we've seen it before, and it ultimately doesn't actually have any real impact on how these people fight one another. (The major bad guy here is a rogue member of Kamar-Taj; he's not much of a villain, despite the best efforts of Mads Mikkelsen.) Sometimes even the characters onscreen simply stand around marveling at how neat-o everything looks.

The Marvel movies have been so very good at creating deeply personal transformative journeys for their heroes while telling stories that have real-world relevance. But Doctor Strange cannot come up with either: it's not about anything. It feels disconnected from any concerns we might recognize from our own reality, and it doesn't seem all that interested in tracking what it would really mean for a man like Stephen to go through such a radical turnaround in his life. As a movie, it's not enough of anything: it's not scary enough; it's not bonkers enough; it's not funny enough (its few attempts at humor are tonally jarring).

Doctor Strange is clearly itself tired of "the origin story," and has only been treading water to get to the point when Stephen can play the master sorcerer. There is real power in the finale, in which Stephen combines the intellect he brings to Kamar-Taj with the magic it commands to create a unique solution to a seemingly unsolvable problem. The movie sets up an exciting new villain for Strange's next outing, and the only moment when the film truly comes roaring to life and engages its audience is the sequence that brings Stephen onto the larger Marvel scene. We should have just skipped all this and jumped right into the next story. ♦