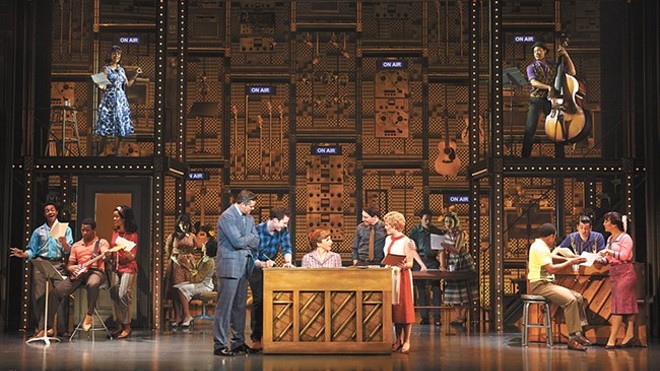 Standing in line for Beautiful: The Carole King Musical, at the INB Performing Arts Center on opening night of its Spokane run (Nov. 9-13), I overheard a middle-aged woman tell her early-twenties daughter, "Through this, I hope you understand Carole," expressing the sentiment that she was missing something by not knowing her as intimately as the baby boomer generation.

And certainly, if you weren't aware of the breadth of music produced by King and her writing partner/ex-husband Gerry Goffin, as well as the team of Barry Mann and Cynthia Weil, you would be after seeing this. You would know that King was 16, and had skipped two when she met Goffin at Queens College in New York City. You would know that he wrote many of their popular songs in the sixties, including "Will You Love Me Tomorrow?" and "Locomotion." And, finally, in Act II, you would witness the creation of her most famous album, Tapestry, which won four Grammies and Album of the Year in 1972.

The choreography was smooth and punchy, the lights bright, the costume design era-appropriate and flashy. Patrons were having a great time, laughing at the sexual jokes barely hidden in innuendo, loving the theatrical way King's songs were played, emotionally responding to the moments when King's life starts to become more complicated. By the end, the crowd was proudly singing along to "(You Make Me Feel Like) A Natural Woman." This enjoyment comes as no surprise: as principal cast member Suzanne Grodner, who plays King's mother, Genie Klein, said to the Inlander in our preview of the show: "We have people coming to see the show in their 50s, and 70s who grew up with Carole as the soundtrack of their lives."


Whether or not you grew up with the music, Beautiful is a show that represents it as well as Broadway can. I was missing some of the emotion, some of the angst, of King's Tapestry. I was missing any mention of Goffin's bipolar disorder, and more than a little perturbed at his representation as "just another guy in the sixties." I wanted less and more of the King who knew and loved James Taylor and Joni Mitchell. Less of famed producer Don Kirshner and more of Carole King alone at her piano. Some of these complaints stem from the inability for modern Broadway to respectfully do justice to the rebellion during the time King wrote Tapestry; an attempted Bob Dylan musical failed miserably because it's hard to incorporate those kinds of stylings on a touring stage.

Beautiful is a celebration of all the incredible music the Goffin-King and Mann-Weil pairs created together, their competition and their strife. It's the story of King's growth into an independent lyricist, a strong and liberated woman (at least through 1971, when the musical ends.) It's a celebration of Tapestry, but not necessarily a well-woven, emotionally complicated tapestry of its own.