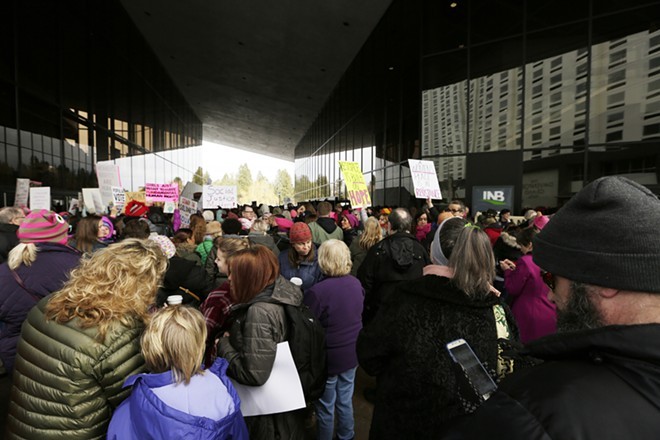 Washington DC is hosting a pro-life march today, just a few days after Women's Marches swept the country, like this one in Spokane.
ON INLANDER.COM

FILM: The Spokane International Film Festival kicks off tonight with its opening gala and a screening of Rich Cowan's The Basket.

SPORTS: The Zags are still undefeated after crushing San Diego (79-43) last night, and are chasing a No. 1 ranking.

THEATER: Stage Left Theater delivers a production of Disgraced, a Pulitzer-winning play tackling race and religion through some brilliant dialogue.

A really yuge meeting
Today, Trump will meet with Theresa May, Britain's prime minister, in his first meeting as president with a foreign leader. On the other hand, the president of Mexico canceled his scheduled meeting with Trump next week, probably because he's not paying for that (expletive expletive) wall. (BBC, The New York Times)

Anti-abortion march
Marchers at today's anti-abortion march in D.C., March for Life, are probably stepping around the confetti and abandoned signs still there from last week's inauguration and Women's March. The march has happened every year since the Roe v. Wade decision (legalizing abortion) in 1973; Vice President Mike Pence is expected to speak. (CNN)

Spokane police standoff
Details about the Spokane Police's nine-hour standoff with a wanted fugitive are still coming out this morning; acting on a tip, the department's Patrol Anti-Crime Team found the man at a house in the 2100 block of east Cataldo around midnight last night, and the standoff ended sometime this morning. (KXLY)