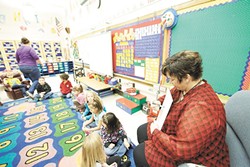 Young Kwak
A Madison Elementary kindergarten classroom in 2014
For Spokane Public Schools, it's no longer enough to teach in only one language. Starting this fall, some students will be receiving an education in two languages: English and Spanish.

Spokane Public Schools announced last week that it will launch its first language immersion program for 50 kindergarten students in fall 2017. It will be the first of its kind in Spokane County, but really, Spokane Public Schools is a little late to the game in creating a language immersion program, says Jeanette Vaughn, director of the district's Department of Innovation.

"We're really excited because we're far behind where typical districts of our size are. Even smaller districts [have language immersion programs]," Vaughn says.

The program will have two teachers. One will and speak, only in Spanish, the other in English, and they will share the 50 students but split the time, Vaughn says. For example, 25 students may be in the English class in the morning, before switching to the Spanish class in the afternoon and vice versa.

Vaughn hopes there will be a good mix of native Spanish speakers with English-speaking students. The goal is to help students become bilingual, and Vaughn says immersion also helps students down the road with communication, critical thinking, and increased problem-solving. Students will be able to complete foreign language requirements for graduation at an earlier age.

"The other piece is that culture is very much intertwined with language," Vaughn says. "It will be very internationally-minded and globally-focused."

Districts across the state and country have similar programs. Spokane Public Schools plans to expand the program by adding a grade each year as the students get older, up until sixth grade. Within three to four years, Vaughn says, the program would like to have its own facility.

Enrollment is based on a lottery system. In order for parents to have their child's application considered, they must attend one of the two remaining parent information sessions at the Libby Center, 2900 E. First Ave. The next session is Saturday, Feb. 11 at 10 am, and then Monday, Feb. 13 at 6 pm. (Click here for more details.)

"We're trying to provide a portfolio of options for students," Vaughn says. "We're trying to really recognize that one size doesn't fit all any longer. And when we ask families what they're interested in, language programs are at the top of the list."