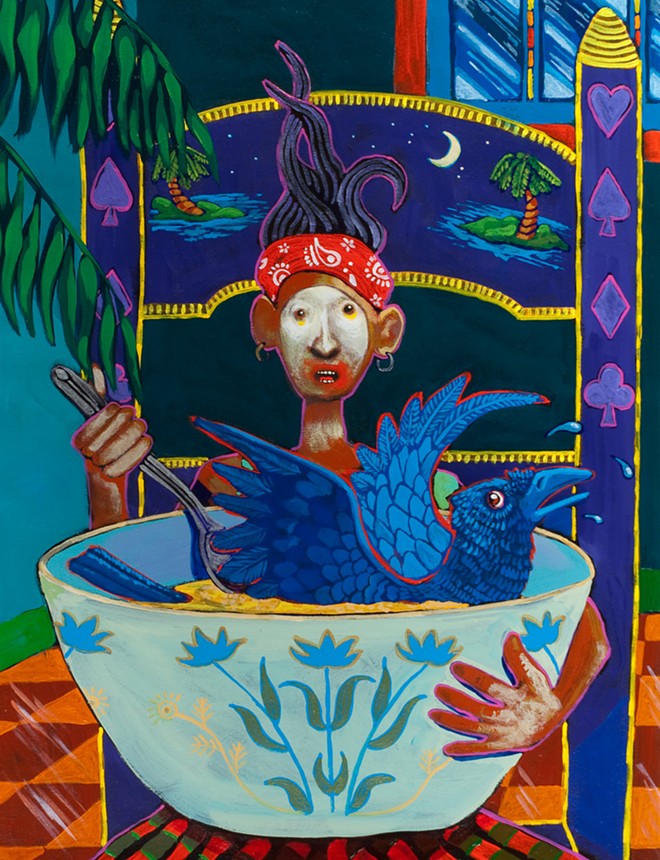 Art by Ric Gendron
See art inspired by Salish folktales (above), interactive video installations and more at "Saturate," a visual arts tour this weekend focused on artists from ethnic or cultural minorities.
ON INLANDER.COM

NEWS: The city of Spokane may be on the cusp of solving homelessness — and for those who are still homeless, the solution can't come fast enough.

CULTURE: Visual arts tour "Saturate" highlights cultural and ethnic diversity in Spokane and artists of color at the event from Spokane Arts, in place of First Friday for February.

SNOWLANDER: The Engerbretson duo, father Jeff and daughter Amie, have built successful careers based on their mutual love of skiing.

IN OTHER NEWS
This is ourselves... under pressure
The No. 1 Zags survived the challenge from BYU on Thursday night, winning the tense match 85-75, though not for lack of nail-biting in the final stretch. (Spokesman-Review)

What doesn't kill you makes you stronger
The Atlanta Falcons will face off against the New England Patriots this Sunday at 3:30 pm in Houston. Halftime performer Lady Gaga says she'll put on a performance people will "never forget" — hopefully not in the Janet-Jackson-wardrobe-malfunction way from 2004's Houston Super Bowl. (USA Today)

Queen Bey expands her hive (and breaks the Internet)
Beyoncé, 20-time Grammy winner and she of 1,000 nicknames, announced Wednesday on Instagram that she's having twins, earning her the world record for most-liked Instagram post. It was a social media dream: A post by Beyoncé, with good news in this new age of despair, and on the first day of Black History Month. Her release of a pregnancy photo album yesterday was just a victory lap. (Instagram, Huffington Post)