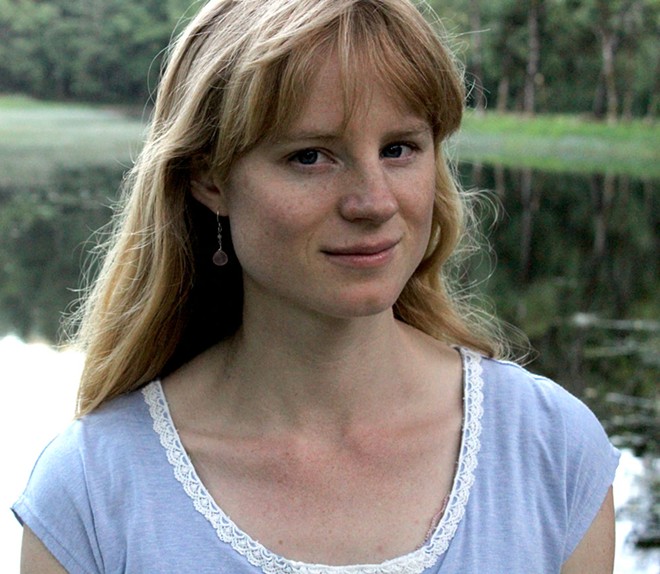 Sam McPhee
Author Emily Ruskovich is one of this year's Get Lit! festival headliners.

It was several years ago, on a tranquil afternoon in rural North Idaho, when Emily Ruskovich was struck by a kind of premonition, unexplainable and fleeting, that would eventually inspire her first novel.

Ruskovich's father had always chopped his own firewood, but this year, she remembers now, he was recovering from back surgery. They were driving along a seemingly endless dirt road, winding their way up into the hills, to purchase some pre-split cords.

"It was so far removed from the world, so far away from everything," Ruskovich recalls. "I had this sense that this particular place held a memory, and it was not a good memory. Even though it was so beautiful — it was golden and there were grasshoppers and crows everywhere — but it was a very unsettling feeling."

What she imagined had happened on that mountain, just a few miles away from where she grew up, soon became a 70-page novella about a family torn apart by a senseless death. But there was more to their story, more than could be contained within the margins of a short story collection.

"One of my professors had told me, 'You've got to turn this into a novel. Don't publish this with your stories because then it'll be over. You can't return to it,'" Ruskovich says. "I was quite intimidated about writing a novel. I didn't know if I could do it."

That novel, simply titled Idaho, unspooled over the next few years, developing into a tapestry of crisscrossing lives that spans half a century. And it all came from the ominous aura of a warm summer day on a desolate mountain road.

"It wasn't so much a premise or a concept; it was just a feeling I needed to pursue," Ruskovich says. "It's not like I ever decided that I was going to write a novel about a mother who killed her child."

Ruskovich grew up on Hoodoo Mountain in Bonner County, and much of her fiction is set in the same ruggedly gorgeous terrain she associates with her childhood.

Her father, now retired, was an English teacher at Lake City High School, which required an hour-long commute every day. Her mother stayed at home with the children when they weren't attending school in Coeur d'Alene. At one point, Ruskovich recalls her parents supporting a family of six on an annual salary of just $25,000.

"For a while we didn't have a house; we lived in a barn," Ruskovich says. "And before we had a barn, we lived in tents."

Through all of this, Ruskovich was always writing, a hobby her parents encouraged, dictating the poetry she would recite to them.

"I don't feel like I ever got into writing. I feel like I was writing before I could actually write," Ruskovich says. "It's always what I was going to do. I never really considered doing anything else. It's the way I understood life, the way I connected with people. Everything was through stories."

Ruskovich later attended the University of Montana, the University of New Brunswick and the Iowa Writers' Workshop, and she's been teaching creative writing at the University of Colorado Denver since 2012. She wrote much of Idaho while visiting her home state, and she'll soon be moving back there, joining the faculty at Boise State University in the next school year.

"I feel like I can't separate myself from those hills and that grass and the smells," Ruskovich says. "It's beautiful and untouched in a really profound way, but it's also pretty hostile."

Idaho is essentially a ghost story, though not in the literal sense of the term. It's about haunted people dwarfed by a haunted landscape, a drama that examines grief through the prism of fading memory.

Ruskovich's prose is economical and almost soothing, but the novel itself is restless in its structure: It begins in 2004 and ends in 2025, and in between it fades in and out of episodes set in the 1970s, '80s and '90s.

The book's dramatic anchor is Ann, a former music teacher who was born in Idaho but raised in England, who's now living in a farmhouse near her birthplace. Her husband Wade, as weathered as the countryside that engulfs him, is slowly succumbing to the early-onset dementia that also affected his father and grandfather, and he's now prone to increasingly intense outbursts of violence.

Ruskovich slowly introduces a plot that's reminiscent of Daphne du Maurier's Rebecca, in which a woman finds herself always in the shadow of her husband's late first wife. But Wade's ex-wife, Jenny, isn't dead: She's in prison for life, having killed their youngest daughter nearly a decade earlier. Wade and Jenny's older daughter vanished on the same day the other girl was murdered, running off into the woods after witnessing the crime and never returning.

We follow Ann as she inadvertently excavates artifacts from Wade's previous life — a Polaroid under the fridge, a dusty sketchbook in the barn, a rusted pickup truck that hasn't been driven in years — and as she tries to come to terms with a moment of violence that her own husband is beginning to forget ever happened.

"Ann's life, for ten years now, ever since she married Wade, has followed this secret trail of lost images, real and imagined," Ruskovich writes. "She has taken Wade's past and she's laid it out in front of her, her future a backward trail, even as it disappears."

The murder remains something of a mystery to us, as well: Ruskovich reveals little details as Idaho unfolds, like a photograph gradually developing before our eyes, though the image remains as blurry and unfocused as Wade's own mental state.

"It's a very complicated story, and nobody has the full picture," Ruskovich says. "There are things missing in the novel, and that's because I could only access what the characters themselves can access."

But Ann's situation is only one section of Idaho's multigenerational saga. As Ruskovich weaves through time, she also shifts narrative perspectives — to Wade and Jenny's daughters in the days before the murder, to Wade's own father in 1973, to the woman sharing a prison cell and an unexpected kinship with Jenny, even to one of the bloodhounds hunting for the scent of a missing girl in the forest.

That approach is emblematic of Ann's own emotional journey, as she tries to fill in the missing pieces of the puzzle that is Jenny's crime.

"Ann is coming to it from this perspective of an outsider who feels inexplicably that she has something to do with it," Ruskovich says. "She doesn't know what happened, she wasn't there. And Wade can't quite access it, because he's losing his memory. And Jenny, we get her perspective, but we never face the incident straight on, because it's so inconceivable what she's done.

"It's like her memory is incapable of returning to the event itself."

And like the landscape in which it's set, Idaho is shot through with an ever-creeping dread, even in seemingly tranquil moments. Consider a scene in which Wade accepts a ride from a friendly old man who takes off his gloves to reveal a small, blotchy swastika tattoo on his hand, or another in which Ann comes upon a safe haven that radiates a strange sense of menace. Ruskovich's Idaho is a place of fascinating contradictions: It's beautiful and delicate, harsh and unforgiving.

But this story is also one of hope and forgiveness, and we look on as an unspoken understanding develops between two unlikely people in the novel's final chapters.

"It's not a whodunit, it's not a mystery. It's not meant to titillate," Ruskovich says. "It's about the ways people endure in the face of unspeakable tragedy, through friendships and love and sisterhood. Ann feels a kind of love for Jenny and takes on Jenny's guilt as her own, and I think there's a lot of beauty in that." ♦

Emily Ruskovich and Jamaal May will read at the Bing on Fri, April 21 at 7 pm. Tickets are $12 through TicketsWest, free for students with ID.