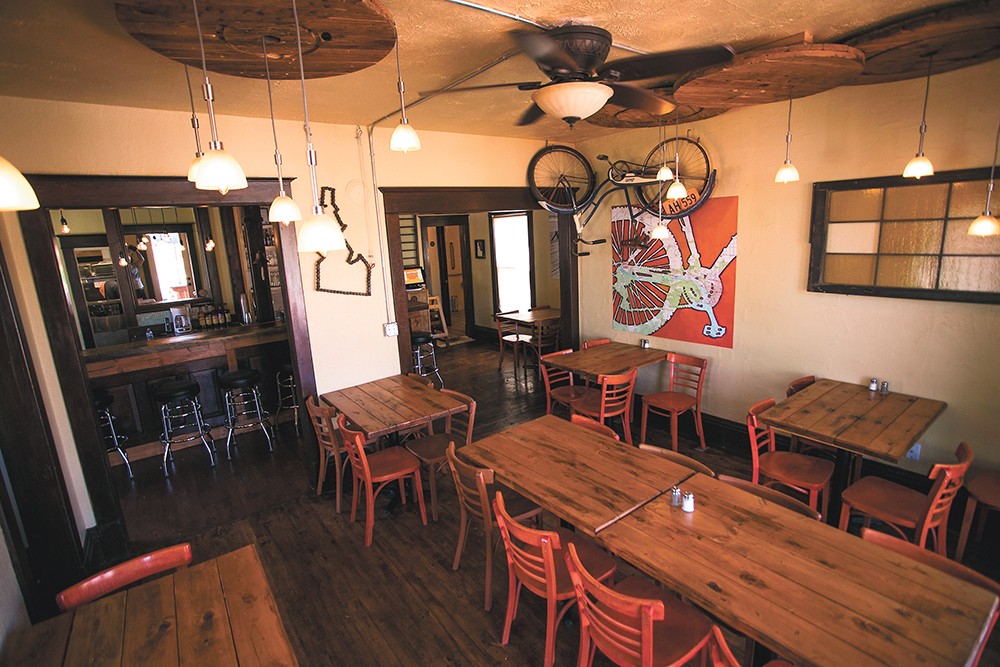 Located in Post Falls, Republic Kitchen + Taphouse is a converted 1910 home on the national historic registry with a spacious, garden-framed patio and the feel of a European gasthaus-meets-Seattle pub. Hegsted's second summer project, Farmhouse Kitchen and Silo Bar, is the companion restaurant to the new Hotel Ruby in Ponderay.

Known for taking classic comfort foods and putting his own spin on them, Hegsted incorporates variations on similar flavor profiles at many of his restaurants. The buttermilk-marinated, twice-fried chicken ($12) is served with a honey glaze and sweet pickles at Republic; at Farmhouse, it's paired with waffles, honey butter, pickled peppers and slaw ($14). Each place also has its own version of other popular dishes like kale salad ($5-$10, depending on size) and beef burgers ($11-$12).

Farmhouse, however, emphasizes breakfast, so the fries are served à la poutine with sausage gravy, cheddar cheese, candied bacon, green onions and fried eggs ($12). Republic's fries pair better with beer or a sandwich and are served as both sides and appetizers, including the Re-Pub Style fries with barbecue spice, garlic aioli and melted blue cheese ($6).

Republic and Farmhouse bring Hegsted's restaurant count to six — the others are Liberty Lake's Eat Good Café and the Wandering Table, Yards Bruncheon, and Gilded Unicorn in Spokane. Hegsted also runs Le Catering, which provided the spread for the July wedding in Coeur d'Alene of Dancing With the Stars' Julianne Hough, also featured in People magazine.

Hardly, says Hegsted, adding that if he "could see the future and/or duplicate myself, that would be awesome."

Instead, Hegsted attributes any success to a combination of hard work, learning from past mistakes and surrounding himself with a good team.

"I don't micromanage," says Hegsted, whose approach is to "give everybody direction and collect everyone together."

It's his goal to create an environment where employees take ownership in what they do at each place, he says, starting with his chefs and managers, as well as other kitchen staff and servers.

Although he wants staff to put their stamp on what they do, consistency is also important, says Hegsted; it's a skill he learned at Marie Callender's back in 1996, his first restaurant job.

"There I learned that you pick up the recipe book and you follow the recipe book, and that's what you do," says the chef, who realized early on that a successful enterprise had to have structure.

A work-life balance is also important; Hegsted's blended family of five has helped shape his outlook. Although he still enjoys the challenge and ego boost of fine dining cuisine, Hegsted knows he can impact more people in a positive way through his current path.

"When we talk about opening a new restaurant, it's always with the realization that my favorite meals have been at a place where you're sharing appetizers and just having a good time," he reflects.

More Clark Kent than Superman, Hegsted says that though he's diligent about analyzing all the numbers before jumping into a new venture, he's less concerned about financial success — he's experienced significant debt in his career — as he is in building community, helping people, having time for family and doing all the right things.

"We want everyone to have a balance to their life and a quality to their life," he says, noting that helping create longevity for his staff also translates to a better experience for the customer.

"We want people to be happy where they're at." ♦