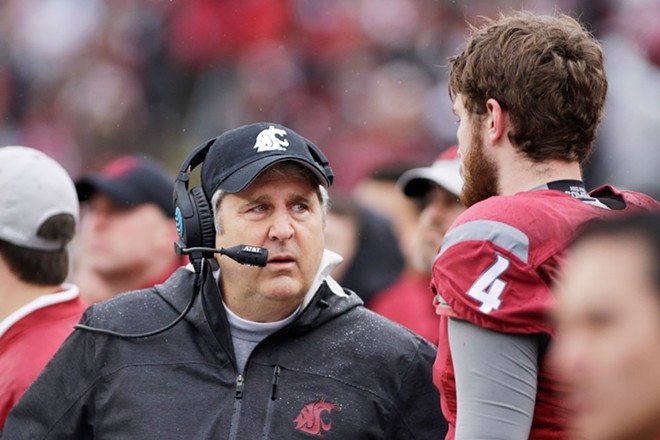 Young Kwak
Mike Leach will try to lead the Cougars to a Pac-12 title in quarterback Aaron Falk's final year.

The big story: Washington State's 2016 season was marked by a stunning eight-game winning streak in the middle of the season, when Leach's high-octane offense was generating a ton of points and some serious blowouts against typically stellar Pac-12 foes like Oregon and Stanford. Unfortunately for Coug fans, that streak was bookended by two losses to open the season — including the second straight season-opening fail against a lower-division opponent — and three to end it, most painfully a home drubbing in the Apple Cup to rival UW.

The good news for the Cougars entering 2017 is that they're still led by quarterback Luke Falk, who skipped the chance to go pro for the opportunity for one more shot at winning a conference championship. While he lost some seriously skilled receivers with the graduation of Gabe Marks and River Cracraft, Leach seems to always come up with new weapons for the offense — keep an eye on sophomore running back James Williams and junior receiver Tavares Martin Jr. If third-year defensive coordinator Alex Grinch can keep the Cougs' D improving, they'll have a chance in every game they play.

The Cougs' schedule lends itself to a hot start with five straight home games to open the season, although both Boise State and USC offer serious challenges. If they somehow come through September at 5-0 or 4-1, the Cougs will be in good shape to battle UW and Stanford for the Pac-12 North title.

The big game: The Cougs' fifth straight home game to start the season, against USC, gives them an opportunity to knock off the nation's No. 4 team (in preseason polls) and launch themselves into the meat of their Pac-12 schedule on a path, potentially, for an Apple Cup showdown with UW to win the conference's North division.