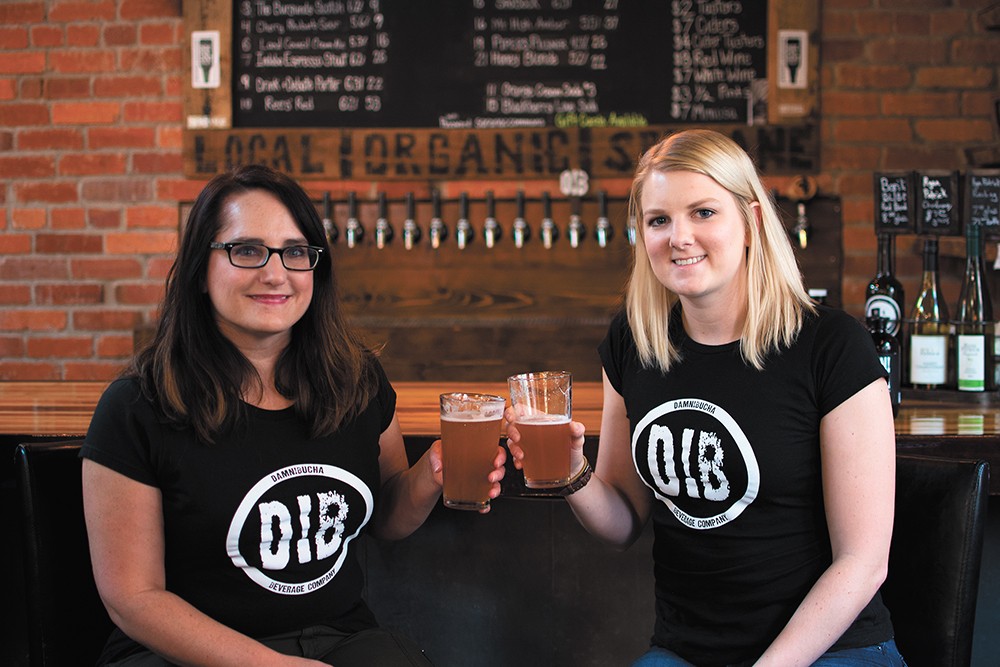 want to turn preconceived notions of their product on its head, in a few ways.

It was with this thought in mind that Damn!Bucha founders and owners Jamie Sweetser and Linda Johnson chose the catchy moniker — first suggested by Johnson's husband — for their small business.

"We want it to be anyone's drink," Johnson explains, adding that she and Sweetser also considered how other makers of the fermented tea beverage tend to market their products in an overtly all-natural, health-conscious tone.

Still, the Damn!Bucha founders also stress that their handcrafted batches of effervescent kombucha are made from organic ingredients, and that the drink can be a more healthful choice than many other beverages.

Kombucha has been rising into the mainstream of food trends in recent years for its purported health benefits (the end product contains probiotics — live bacteria and yeasts that are good for your gut — and it's also usually low in calories). It's made by fermenting tea with a symbiotic colony of bacteria and yeast (aka SCOBY) for 7 to 14 days, and during commercial production is also lightly carbonated.

"I think kombucha becoming mainstream has a lot that has to do with people wanting something different," Sweetser says. "It has a bold flavor, it's healthy and it can offer additional value — that is what people are looking for in any aspect of the food industry."

(their slogan is "the best damn kombucha you've ever had"), Sweetser and Johnson hope that Damn!Bucha can appeal to a wider audience than what's considered traditional kombucha drinkers, especially locals who appreciate the burgeoning craft beer scene. They also want their products to be seen as not simply an alternative to other beverages on local menus, including beer and soda, but as yet another choice.

"It has its own place on the menu," Sweetser says.

Sweetser and Johnson founded the small-batch kombucha brewery last fall, but didn't get production running at a distributable pace until earlier this summer. They brew at a commercial kitchen downtown and currently only distribute kegs, though they hope to begin bottling soon.

Damn!Bucha currently brews five flavors — classic (nothing added), blueberry mint, spiced cherry, ginger pomegranate and mango papaya. Its owners say they're constantly thinking of and experimenting with other flavor combinations that could be seasonal or new mainstays to the company lineup.

"A lot of people are used to flavored kombucha, and we want to give them that, but also have our own unique flavor," Johnson says. "We decided that we're going to make kombucha that we want to drink."

Damn!Bucha uses a blend of English breakfast tea as the base for each brew, sometimes with some green tea, Assam tea leaves or mint leaves added. Each of the added flavor blends come from fruit concentrates or fresh juice, but the brewers also want their base product to stand out.

"We like the flavor of that, and we're not trying to hide it — the other flavors just give it a variety rather than changing it," Sweetser says.

Sweetser and Johnson got their start in the world of kombucha years ago as home brewers. Both work full-time as food scientists for a company based here, which is also where they met, and what led to considerations of how their professional experience in commercial food production and safety would benefit their entrepreneurial plans. Now, the business partners spend their free time brewing, marketing and distributing their kombucha, and have high hopes for the business to continue growing.

"I feel so lucky to have the customers we have, and the support so far," Sweetser reflects. "It's amazing to me that we're already at that point." ♦