Cake Is His ‘Art.’ Does That Mean He Can Deny One to a Gay Couple? 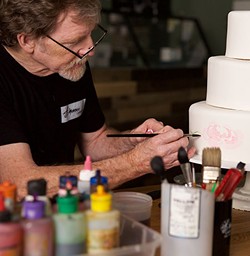 
LAKEWOOD, Colo. — Jack Phillips bakes beautiful cakes, and it is not a stretch to call him an artist. Five years ago, in a decision that has led to a Supreme Court showdown, he refused to use his skills to make a wedding cake to celebrate a same-sex marriage, saying it would violate his Christian faith and hijack his right to express himself.


“It’s more than just a cake,” he said at his bakery one recent morning. “It’s a piece of art in so many ways.”

The couple he refused to serve, David Mullins and Charlie Craig, filed civil rights charges. They said they had been demeaned and humiliated as they sought to celebrate their union.

“We asked for a cake,” Craig said. “We didn’t ask for a piece of art or for him to make a statement for us. He simply turned us away because of who we are.”

The government, Phillips contends, should not be allowed to compel him to endorse a message at odds with his beliefs.

“I’m being forced to use my creativity, my talents and my art for an event — a significant religious event — that violates my religious faith,” Phillips said.

Gay rights groups regard the case as a potent threat to the equality promised by the Supreme Court in 2015 when it said the Constitution guaranteed the right to same-sex marriage. A ruling in favor of Phillips, they said, would mark the marriages of gay couples as second-class unions unworthy of legal protection.

The Supreme Court has in recent years been exceptionally receptive to free speech arguments. And it has ruled that the government may not compel people to convey messages that they do not believe.

Craig said the free speech argument was a smoke screen. “It’s not about the cake,” he said. “It is about discrimination.”

If a bakery has a free speech right to discriminate, gay groups contend, then so do all businesses that may be said to engage in expression. A ruling for Phillips, they say, would amount to a broad mandate for discrimination.

The case, Masterpiece Cakeshop v. Colorado Civil Rights Commission, No. 16-111, will be argued in the late fall and is likely to turn on the vote of Justice Anthony M. Kennedy, who is simultaneously the court’s most prominent defender of gay rights and its most ardent supporter of free speech.

Mullins and Craig have so far prevailed, winning before the Colorado civil rights commission and in the courts.

The Colorado Court of Appeals ruled that Phillips’ free speech rights had not been violated, noting that the couple had not discussed the cake’s design before Phillips turned them down. The court added that Phillips remained free to say what he liked about same-sex marriage in other settings.

The Alliance Defending Freedom, a conservative Christian group that represents Phillips, said in a brief that the Supreme Court has long recognized a First Amendment right not to be forced to speak.

A wedding cake created by Phillips, the group said, is “the iconic centerpiece of the marriage celebration” and “announces through Phillips’ voice that a marriage has occurred and should be celebrated.”

“The government can no more force Phillips to speak those messages with his lips than to express them through his art,” the brief said.