Fresh-hop season is an exciting time in the Inland Northwest; these seven local offerings caught our attention 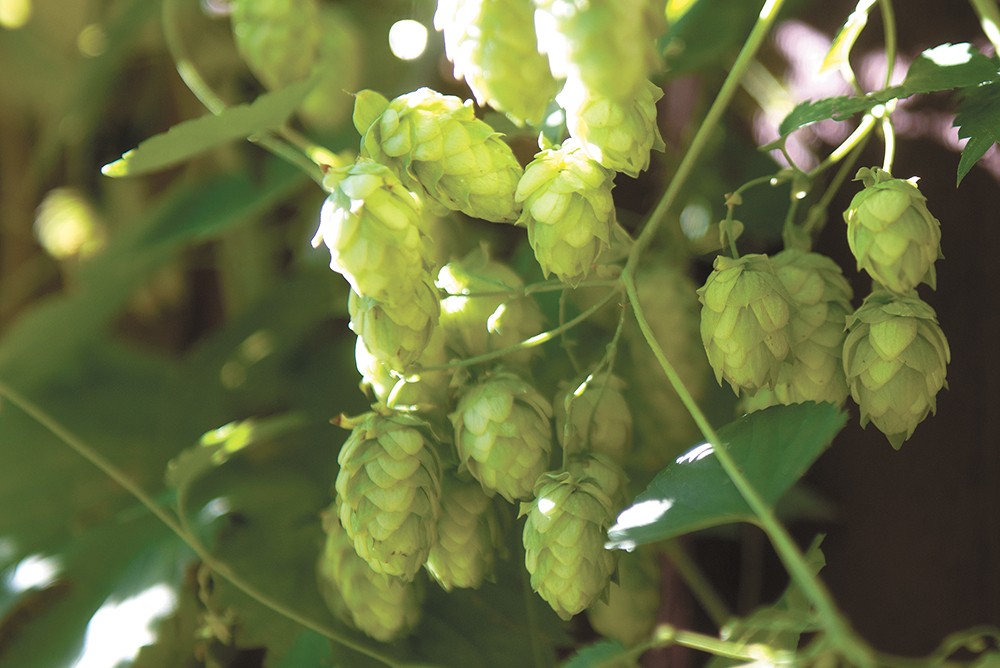 Derek Harrison
The regionally grown Cascade hops are a favorite among brewers.

It's that time of year again:

Local hopheads are celebrating the arrival of fresh-hop beers at breweries throughout town. For a few weeks this fall, local bars and taprooms will be filled with kegs of these hoppy, aromatic beverages. The vast amount of fresh-hop beers available locally may be overwhelming, so here's a list of those we think you should try. The season is short, so drink up while you can.

This single-hopped IPA is brewed with locally grown Cascade hops straight from the backyard of owner Charlene Honcik's friend. Harju is a classic IPA that balances bitterness and malt. It's available now at Badass Backyard's taproom in Spokane Valley. Also on tap is the First Snow Double IPA — a partial fresh-hop ale brewed with Cascade, Willamette, Chinook and Galena hops and dry-hopped with Cryo Cascade, Citra and Simcoe.

Named after a Gary Larson cartoon illustrating the made-up "fear of being pursued by timber wolves around a kitchen table while wearing socks on a newly waxed floor," brewer Thomas Croskrey is implying that you don't want this hoppy goodness in your hands when the timber wolves strike. Luposlipaphobia, a red ale brewed with fresh Chinook, Cascade and Centennial hops from Big Barn Brewing's farm in Green Bluff, will be released this Saturday, Sept. 30, at Bellwether's second anniversary party.

Craig Deitz has a significant advantage over most other local brewers — he owns a hop farm. This Cascadian dark ale (or black IPA) boasts wet Cascade, Chinook and Willamette hops that are harvested and brewed on the same property. Once a collaboration between Big Barn and Steam Plant, Midnight Harvest is now reemerging with a completely different recipe. It's available Saturday, Sept. 30 at Big Barn's High Hopes for High Hops charity event.

Iron Goat's SpoHop is the Frankenstein's monster of fresh-hop ales. It's a community project that's brewed with donated hops grown in yards throughout Spokane. This year's batch contains 157 pounds of mystery hops. The IPA is expected to be released early next week, along with a single-hopped Citra fresh-hop IPA. Iron Goat will also be brewing a late-season Ekuanot fresh-hop ale.

The latest version of Perry Street's series of New England IPAs contains fresh Loral and Simcoe hops. Two hundred pounds of hops were picked early in the morning at Carpenter Ranches in the Yakima Valley, then added to the 7-barrel batch of beer in about eight hours. True to the style, this beer is super hazy and juicy. You can find it at Perry Street's taproom right now, along with their Amarillo fresh-hop pale ale. Available later in the season will be the brewery's single-hopped Mosaic fresh-hop IPA.

Trickster's Evan Ruud starts the beginning of every harvest season with a rafting trip down the Tieton River in Yakima Valley. On his way home this year, Ruud made a stop at Carpenter Ranches, where he loaded his trailered raft with 600 pounds of freshly picked hops. The result is an IPA with 25 pounds per barrel of wet Loral and Simcoe hops. It is available now at Trickster's taproom and will be tapped Saturday, Sept. 30 at Growler Guys in Coeur d'Alene during IPA-off.

Fresh-hop season is an exciting time for Northwest breweries, but with the rise of popularity in dry-hopped ciders, one local cidery is joining the mix. Twilight Cider Work's Hoppercut is a crisp cider that was dry-hopped with wet Simcoe hops for nearly a week, then back-sweetened with apricots. You can find it on draft at Twilight's taproom in Green Bluff and Solace Mead & Cider in Kendall Yards. A limited number of bottles also are available. ♦

Big Barn hosts a fresh-hop charity event with eight local breweries and a cidery. The afternoon on Big Barn's farm includes live music and a keg auction. All proceeds benefit the Green Bluff Lions Club. Tickets are $25 in advance and $30 at the door. You'll get five drink tokens and a bratwurst meal.

The second annual event from Steel Barrel (154 S. Madison) features Fremont Brewing's three Field to Ferment fresh-hop ales (Centennial, Amarillo and Citra) and the highly sought-after Cowiche Canyon Pale Ale with fresh, organic Citra and Simcoe hops. The freshness doesn't stop there; you can expect to see other regional beers on tap, too.