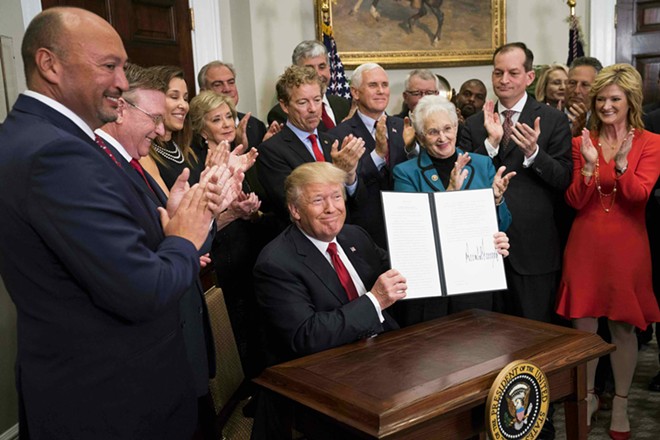 
The twin hits to the Affordable Care Act — on successive days — could unravel President Barack Obama’s signature domestic achievement, sending insurance premiums soaring and insurance companies fleeing from the health law’s online marketplaces. After Republicans failed to repeal the health law in Congress, Trump appears determined to dismantle it on his own.

“The government cannot lawfully make the cost-sharing reduction payments,” the White House said in a statement.

It concluded: “Congress needs to repeal and replace the disastrous Obamacare law and provide real relief to the American people.”

In a joint statement, the top Democrats in Congress, Sen. Chuck Schumer of New York and Rep. Nancy Pelosi of California, said Trump had “apparently decided to punish the American people for his inability to improve our health care system.”

“It is a spiteful act of vast, pointless sabotage leveled at working families and the middle class in every corner of America,” they said. “Make no mistake about it, Trump will try to blame the Affordable Care Act, but this will fall on his back and he will pay the price for it.”

But Speaker Paul D. Ryan, R-Wis., praised Trump’s decision and said the Obama administration had usurped the authority of Congress by paying the subsidies. “Under our Constitution,” Ryan said, “the power of the purse belongs to Congress, not the executive branch.”

The future of the payments has been in doubt because of a lawsuit filed in 2014 by House Republicans, who said the Obama administration was paying the subsidies illegally. Judge Rosemary M. Collyer of U.S. District Court in Washington agreed, finding that Congress had never appropriated money for the cost-sharing subsidies.