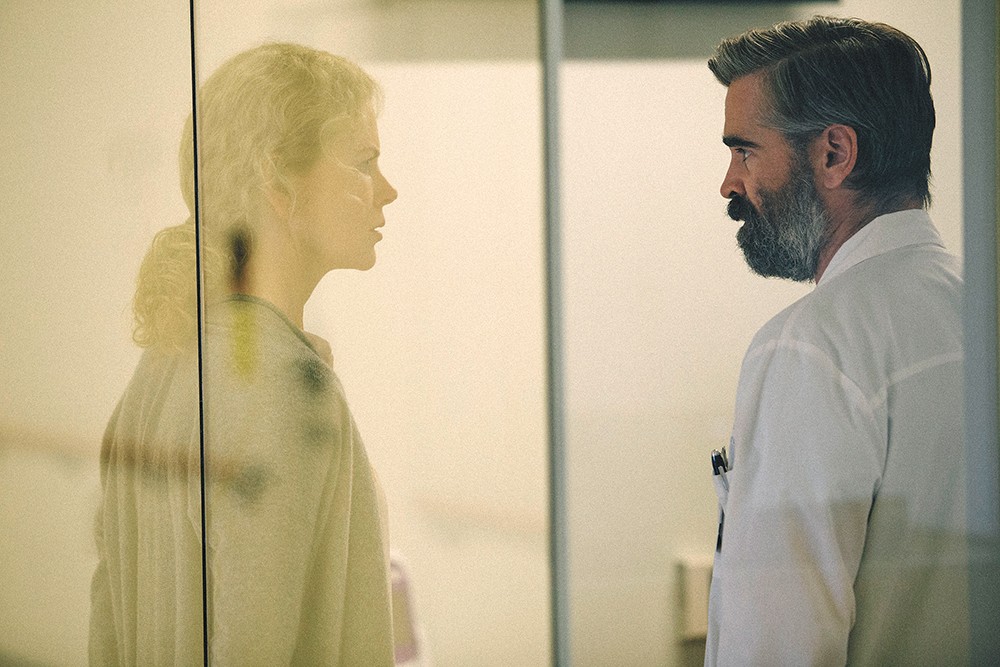 Through a glass, darkly: The Killing of a Sacred Deer is here to offend your most delicate sensibilities.

If you've seen Yorgos Lanthimos' other films, like Dogtooth or The Lobster,

you enter The Killing of a Sacred Deer braced for uncomfortable hilarity with touches of deadpan violence. In that respect, Lanthimos does not disappoint. In other respects — say, in the area of providing a lighthearted cinematic experience that you can wholeheartedly recommend to all your friends — he is unsuccessful and not interested.

Dogtooth (in Greek) concerns a family keeping its children isolated from the rest of the world in hilarious, unsettling ways; The Lobster (in English, starring Colin Farrell) is set in a world where single people are sent to a facility and given 30 days to find a mate or be turned into the animal of their choice.

With regular co-writer Efthymis Filippou, the Greek absurdist here presents what might be his darkest morality play yet. Set in an unnamed American city (filmed in Cincinnati), it involves a heart surgeon, Steven Murphy (Farrell again), his ophthalmologist wife Anna (Nicole Kidman) and their children, teenage Kim (Raffey Cassidy) and younger Bob (Sunny Suljic). But it also concerns a 16-year-old boy named Martin (Barry Keoghan), with whom Steven has some kind of connection, buying him gifts and taking him out for ice cream.

We do not immediately understand the nature of Steven's relationship with Martin — there's an uneasy feeling as we wonder just what kind of "unsettling" this movie is going to be — but we learn that the boy's father was a patient of Steven's and that his mother (Alicia Silverstone) has the hots for the doctor.

Other odd details emerge. The Murphys are generally a loving, functional family, but their conversations are mundane, their manner detached and clinical. Steven and Anna's sex life involves one of them pretending to be unconscious, like a patient under anesthesia. Everyone overshares private information and asks strangely personal questions. Martin, a squirrelly, messy kid, ingratiates himself with the Murphys, befriending teenage Kim before finally spelling out his intentions. I won't spoil them, but if the film's title means anything to you (it comes from Greek mythology), you may guess where things are headed.

What follows is a perverse Twilight Zone scenario about an impossible choice, made grimly funny by everyone's stilted delivery (as if they're bored with a situation that's anything but) and Lanthimos' commitment to his premise. As usual, he dismisses as irrelevant any questions about the "how" of it all. He's more interested in the moral dilemmas and ethical repercussions of the situation, and there's much to ponder in how the Murphys go about making their choices.

I wish it ended with more flourish instead of simply resolving the plot; on the other hand, Keoghan (recently seen suffering a head injury in Dunkirk) gives a performance of remarkable subtlety and creepiness. The film is an audacious, unpredictable provocation that tickles my sensibilities but may offend yours. You'll know whether the movie's for you by whether the preceding sentence reads like a warning or an invitation. ♦