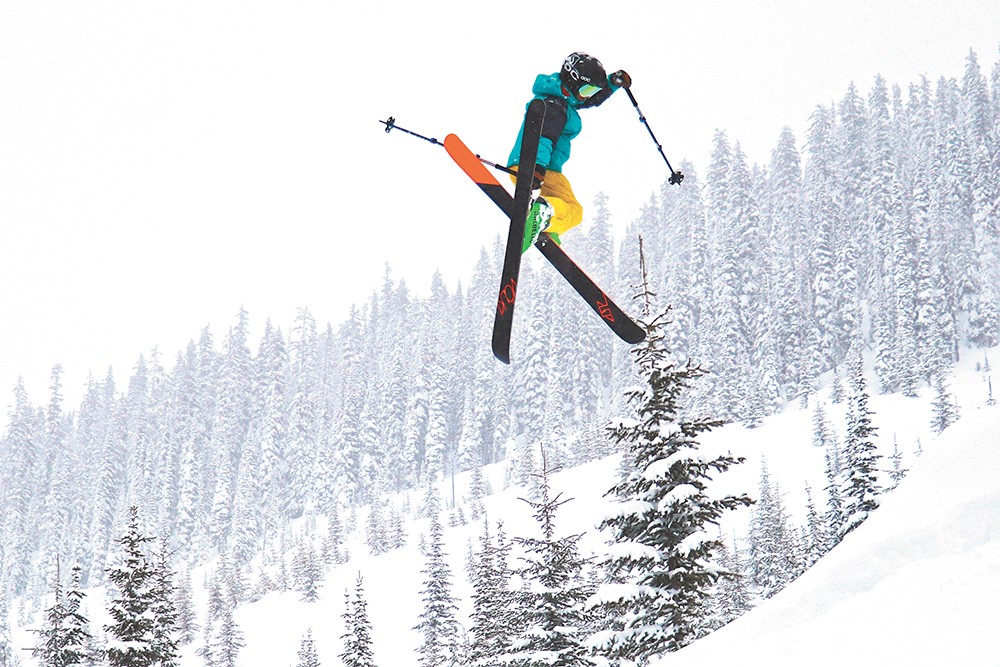 Over the course of 30-plus years

as a professional skier, you meet a few skiers who possess an incredible talent. Some of these skiers come into their own in their mid- to late-20s and others at a very early age. A friend of mine, pro skier Matt Reardon, who lives in Squaw Valley, California, called me up one day last winter and said, "You really need to check this 14-year-old Karsten Hart out. This kid shreds on skis and I know he's someone you need to get on our TV show."

When Matt makes a suggestion like that, you go with it and check it out. I asked Matt to send some photos or video of Karsten. I barely put down the phone and my email was blowing up as Matt was sending me incredible photos and video of this 14-year-old throwing huge backflips and skiing legendary runs at Squaw Valley. The big Backies were impressive but what really caught my attention was Karsten's descent down Squaw Valley's Eagles Nest, a 60-plus-degree slope of granite covered by snow. Eagle's Nest will make even the most seasoned pro pucker.

With this prodding by Matt, I agreed that I needed to get Karsten on video. I made a phone call to my friend, Paula Gual, owner of Big Red Cats. Big Red Cats is a catskiing operation based out of Red Mountain Resort near Rossland, British Columbia, which is only a two and half hour drive from Spokane. Big Red is one of the few backcountry operations that will take young, accomplished skiers and boarders into the backcountry to experience the legendary Kootenay powder.

After getting the March date and venue locked down, I got the wheels turning and put together a group of three other teen ski racers who knew how to arc a ski. We had Karsten Hart from Squaw Valley, California, Schweitzer Mountain Resort Alpine Racing team members Morgan Wohllaib and Parker Overby, and Sun Valley's Axel Hattrup, the son of '80s ski-film star Mike Hattrup. Throughout the winter these kids spend endless hours training on hard, icy snow, chasing gates, readying themselves for weekly USSA Ski Races, which are held at resorts across the western United States. This trip to BRC was a chance for them to unwind and free ski after a long season of ski racing. 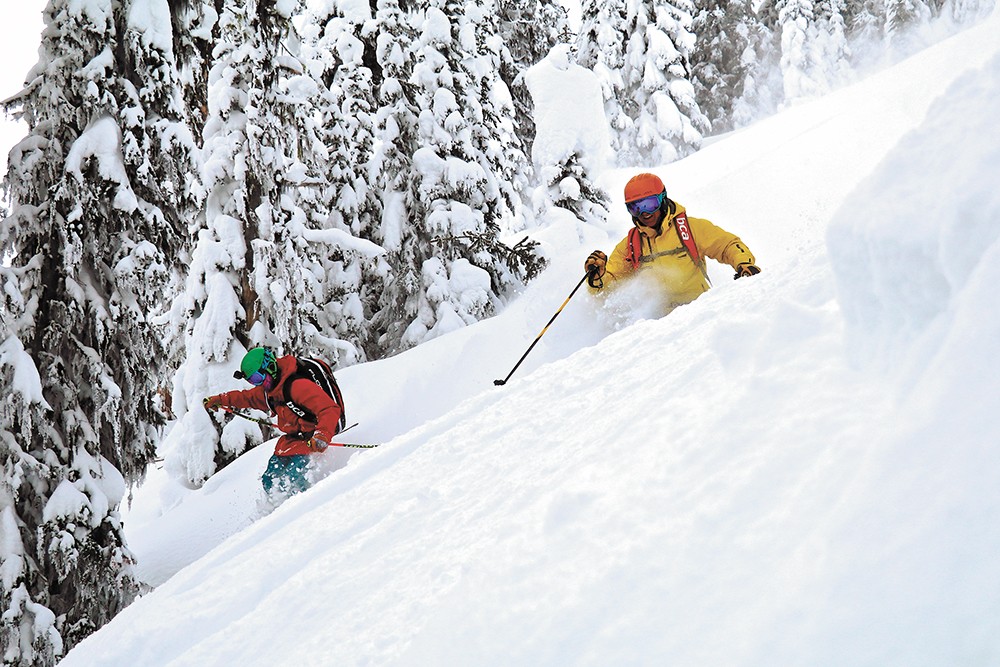 Father and son — Mike and Axel Hattrup — enjoy a rare opportunity to ski together.

Not to be left out of the fun,

the kids' fathers also accompanied us. They told their spouses they were only coming along as "chaperones," just to make sure their kids stayed in line. Right!

The date was March 7 and we met at the BRC base at the bottom of Red Mountain, where we signed waivers and were given our backcountry emergency gear like a shovel, probe and transceiver. From there it was just a short drive to the base of the mountain, where BRC has its backcountry ski tenure. After a transceiver and avalanche-rescue training orientation, we loaded up the cat and headed up.

The intensity on the kids' faces as we unloaded gear above Bay Window, a nice wide-open ski run, was priceless — excitement and nervousness all in one package. After lead guide and owner of Big Red Cats Kieren Gaul directed the skiers to where we were going to be skiing, he pushed off and skied down through the cutback positioning himself on a nice, high vantage point where he radioed up to the tail guide and gave his blessing to send the kids one at a time every 30 seconds.

That nervous look quickly disappeared as each kid pushed off through the knee-deep powder. It didn't take more than a few turns and these kids were back in their Happy Place, letting their skis do the work. Throughout the morning we ventured into handful of some of Big Red Cats 500 named ski runs on 8 different mountains, spanning over 19,300 skiable acres. The wide variety in the terrain kept us wanting more, from glade skiing to wide-open cut blocks and even a few small rock bands and chutes. You could see the kids' confidence grow more and more after each run as they became more comfortable skiing the deep stuff. We found that snow really seemed to collect in the trees where it had that light, feathery feel as you skied through it. This was certainly a big change from the hard, icy race courses they've been skiing on all season. Morgan loved this: "The trees were so much fun, there was such good snow in there. You just have to pick your line between the trees."

Young Guns Karsten and Axel were seeking out every little feature and hit they could find, catching air into that bottomless powder. Karsten described it like this: "When you jump and land in that soft snow, it's like jumping into heaven."

The dads were also taking advantage of their so-called chaperone position and blasting the steeps and trees like they were 14 years old. This trip also turned into a great bonding experience as the kids don't get to ski with their dads as much as they used to because of their training, travel and ski-racing schedules. As Parker mentions: "Skiing with my dad was definitely a cool experience. We got to room together and hang out. It was cool seeing him ski like this, hucking cliffs and stuff."

Axel Hattrup, who growing up watched his dad in numerous Greg Stump ski videos like Blizzard of Awes, was able to witness Mike in his element. As Axel said, "Catskiing with my dad was fun. I got to see a whole other side of him skiing powder and everything, I even saw him do a helicopter."

On one of our numerous tree runs,

we came upon the perfect jump setup which immediately caught the kids' attention. They wanted to hit the jump a few times so the dads packed out the in-run and after about 10 minutes of prepping the kids were ready to fly. First off Axel and Karsten threw big 360s to the bottom. Next up Parker Overby stepped up to the plate and sent it huge, throwing a Shifty, which is where you fly through the air in a racer tuck and you twist your skis to the side. The Big Air game was on now and these boys couldn't hike back up the hill fast enough. After a couple more jumps, you could see Morgan Wohllaib pacing nervously at the top of the in-run as she really wanted to jump but hadn't done much jumping before. With a little pep talk from her father, Alex Wohllaib, Morgan was skiing down the in-run and flying through the air nailing her first big air attempt with a huge Spread Eagle. Morgan wasn't gonna let the boys have all the fun: "I definitely felt like I pushed myself and tested my limits after being around these younger kids that can do some pretty cool stuff."

The kids were feeding off of each other's energy so both Axel and Karsten felt it was time to seize this perfect opportunity and try Double Backflips. Both boys hiked up 20 feet higher from where they were starting for their single backflips. They felt this would be enough speed to go higher and farther to pull off one more flip. First off was Karsten, who landed a hair short. Watching Karstens first jump, Axel stepped up another 10 feet and skated down the in-run and off the jump — one, two flips, and he sees the landing but catches a tip right at the end.

Both these kids gave it one more go and both were so, so close to skiing it out.

Axel was definitely full of energy after the attempts: "It was kinda scary having to tuck again and then trying to pick out a landing but being able to try new tricks out in the powder, being able to fall and not get hurt, yeah, that was fun"

Parker Overby recalls: "Yeah, having fun is what it's all about and sometimes training and competing can get a little stressful but doing stuff like this is really fun and relaxing. This is super fun"

Don't be surprised if you see these kids in ski magazines or on TV over the next few years — they're the real deal! What Karsten liked most about this trip: "I love skiing with people I don't have to wait for, I'm not really a waiting guy." ♦