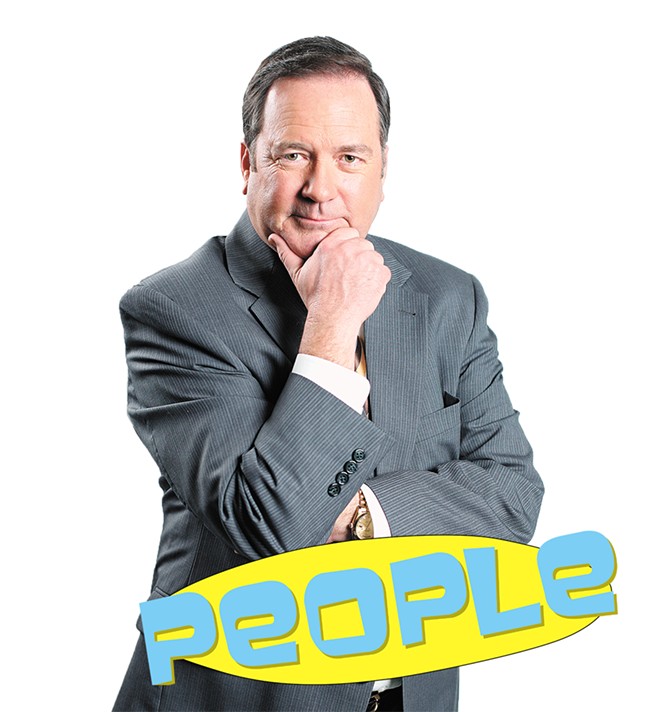 Stuckart definitely isn't running for... Congress. At least not in 2018. He dropped out of the 5th District race last year, and fellow Democrat Lisa Brown has mounted a nationally noticed campaign against Republican Rep. Cathy McMorris Rodgers (third place). But Stuckart is staying plenty busy heading the Spokane City Council. That's a position and place — Spokane City Hall — he seems most comfortable in. It is, after all, just a few blocks from where he went to high school at Lewis & Clark. Stuckart is the kind of hard-charging civic booster you'd expect to run for mayor. Maybe. (SAL)

With more than 30 years of experience, Nadine Woodward is the consummate local news anchor who has seen, said and covered it all. Name a significant regional news event of the last few decades and she's likely covered it: 2015 wind storm. 1996 ice storm. 1991 firestorm. The list goes on... just like her days in the anchor chair. Does she ever take a vacation? Yes, and she's likely to tweet pictures. See for yourself: @NadineKXLY. (SAL)

Eventually this category will be renamed "Best TV Weathercaster not named Tom Sherry." He's a perennial winner... just like his annual winter ski season forecasts or famous turkey drive. And if you happen to bump into him at a certain downtown Spokane Irish pub on St. Patrick's Day (or any other day), he'll gladly toast to another year atop the rankings of the winner list of a long-time local institution... just like him. (SAL)

The ideal sports reporter is someone who understands the sports being covered and the region's fan base. Keith Osso brings both, being a high school and college athlete (baseball) and a lifelong Spokane resident. He's been at KXLY since 2003, going from a sports photographer to reporter to sports director. Which assumedly means he gets a good spot in the press box at WSU and EWU football games. And if so, Keith, share the love! (SAL)

Gracing our Best Of issue and aiding the Spokane cannabis community once again, Sergio DeLeon at Lucky Leaf is your go-to guy for any questions pertaining to pot. Be it flower, concentrate or edible, his extensive knowledge and personality has put the store on that map and kept people coming back. (TC)

Tracey Touch has been at Borracho Tacos and Tequileria since the bar opened four years ago. Named Best Bartender in town, Touch hardly considers her job work. "Doesn't feel like a job when you get to hang out with your best friends every day," she says. Ask for the bar's craft margarita when you see her. "I absolutely think we have our recipe down to a T," she says. (QW)

Greg Johnson says he's just a normal, average "hard working man trying to climb to the top," but his riders know that's not true. The Spokane Transit bus driver was named Best Bus Driver of 2018. "It becomes hard sometimes to get off work or have a day off because I actually miss being at work," says Johnson. (QW)