He Gambles. He Tips Staff. He Eats Alone. All the While, He’s Stocking His Vegas Suite With Guns. 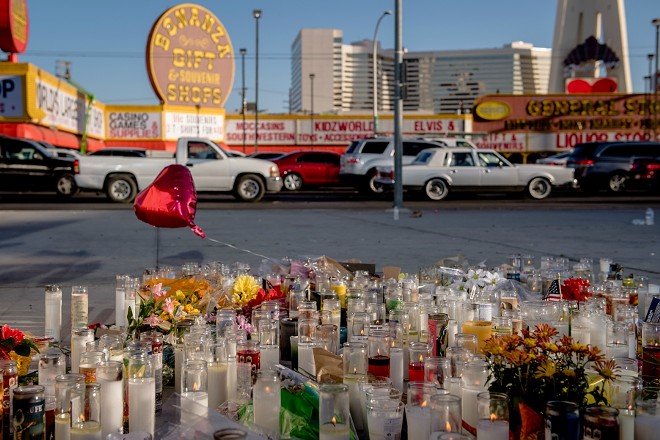 Hilary Swift/The New York Times
A memorial to the victims of the mass shooting in Las Vegas, Oct. 3, 2017.


Sometimes we see him as other hotel guests would have seen him: as the tall gambler intent on the video poker machine across the casino floor, or as the customer standing in line in front of you at the gift shop, buying snacks, or as the guy you briefly glance at as he waits for you to get off the elevator — polite, unhurried, unmemorable.


Sometimes we see him as the employees would have seen him, as the casually dressed VIP with the many suitcases who jokes with bellhops, chats with valets and gives out tips along with handshakes. And sometimes we see him as only the surveillance cameras saw him — riding the elevator alone.

Within a few days, he would use the arsenal he had moved upstairs in those suitcases to shoot and kill 58 people from his 32nd-floor suite at the Mandalay Bay Resort and Casino in Las Vegas.

These were Stephen Paddock’s final movements in the days before he opened fire from his hotel suite Oct. 1: an apparently relaxed solo vacation that, as surveillance footage obtained exclusively by The New York Times from MGM Resorts makes clear, was actually the methodically planned prelude to a massacre.

Over and over in the clips, Paddock is seen leaving the Mandalay Bay for his home in Mesquite, returning with a dark minivan loaded with suitcases. Over and over, valets take his keys; over and over, bellhops stack his luggage on gold carts, helping him transport at least 21 bags over the course of seven days. As they take the service elevator upstairs, Paddock chats with them.

They have no idea that the suitcases they are so conscientiously carrying are full of guns and ammunition.

Toward the end of the footage, two guests carrying shiny plastic inner tubes get off the elevator, padding out in flip-flops. Paddock pauses to let them off, then gets on.

It is the afternoon of Sept. 30. They seem to be on their way to the pool. He is on his way upstairs, where his guns await.