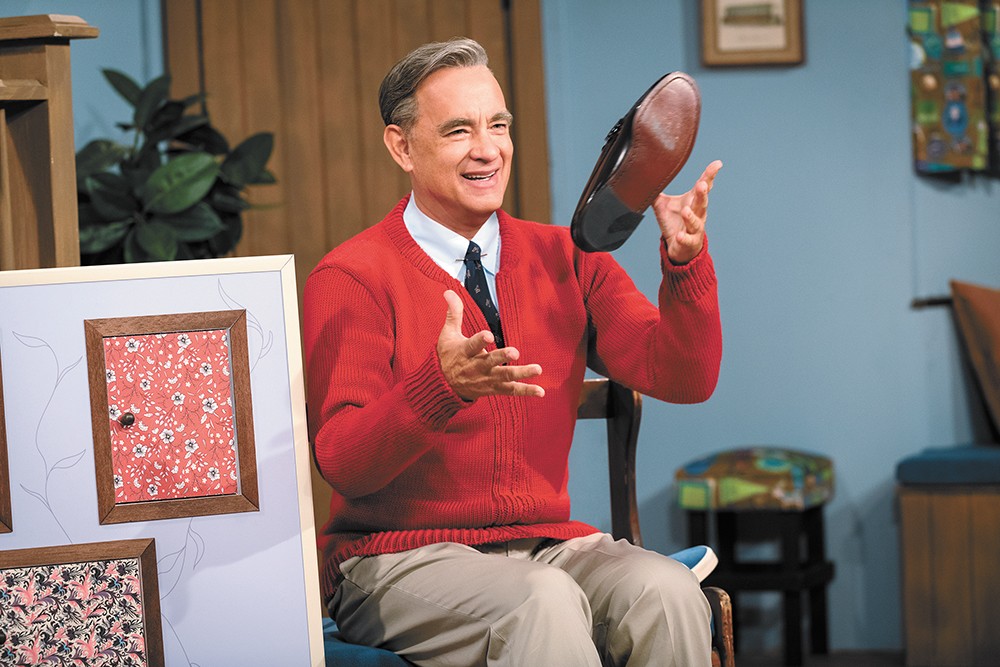 I started sobbing from the opening moments of A Beautiful Day in the Neighborhood, and I didn't stop crying for two hours. And then after I left the cinema and ran into a fellow film critic who had also just seen it, I literally could not manage a word of discussion without bursting into tears again.

This film wrecked me. Utterly wrecked me. In the best possible way. I saw myself in it. It was speaking to me in that same way that Mister Rogers always magically seemed to be doing from out of the TV when I was a little kid. And I really needed its message. The whole world does right now.

I'm pretty sure I never watched Mister Rogers' Neighborhood once I started going to school at age 5. And still, from the moment Tom Hanks ambled into Mister Rogers' little house and changed out of his jacket for a cardigan, out of his shoes for sneakers and settled in to introduce a tale about his friend Lloyd, I descended to blubbering. Maybe it's not a matter of "still," as if there was some contradiction in what I brought to the movie versus what it gave to me, but precisely the opposite: Perhaps Neighborhood instantly slammed me back into the vulnerability of being a very small, very uncertain, very scared child, and then instantly reassured me that everything I was feeling, all the turmoil and confusion, was, in fact, absolutely OK.

This is the beauty and the genius of Marielle Heller's not-a-biopic movie about Fred Rogers. This isn't a movie about him as a person — or, at least, it's that only tangentially. This is a story that is profoundly about the influence he had on all of us who watched him on TV, and on the world at large, via his offscreen impact on one adult person. The entire movie is framed as an episode of Mister Rogers' Neighborhood, with gentle lessons that will be imparted, pitched not to children but to us adults today. This isn't just a movie that is uncynical: It directly confronts cynicism and misanthropy and anger and resentment, and all the other heavy unpleasant emotions that weigh down so many of us, and asks us to let them go if we can, or at least to acknowledge the damage they might be doing us.

In 1998, New York journalist Lloyd Vogel (Matthew Rhys), a writer with a rep for meanness, is assigned — as a joke but for real, too — by his editor (Christine Lahti) at Esquire to write a quickie 400-word blurb about Fred Rogers for an upcoming issue on American heroes. (This is inspired by actual journalist Tom Junod's real 1998 article — he ended up writing not 400 but 10,000 un-world-weary words.) Vogel goes to visit Rogers (Hanks, because, seriously, who else?) in his Pittsburgh studio for an interview. To say that Vogel is skeptical is an understatement: He keeps waiting for the "real" Rogers to emerge, the man behind the TV illusion, who surely cannot be as good and as pure and as noble as he seems.

But there is no distinction between the performance and the man — the Mister Rogers of TV is not a character. Fred Rogers is a man who is precisely what he presents himself to be. Almost unnervingly, almost unbelievably, although yet also immensely plausibly, too.

It's all a beautiful wonder. And it takes some time, but Rogers becomes a friend to Lloyd and has an intense impact on him. Those of us watching may not be as "broken" (Lloyd's word) as Lloyd is, but his brokenness is very much a reflection of the world today: the mistrust in authority figures, the exhaustion with the bullshit. It's tough to accept that anyone — particularly anyone with a public persona — could be so authentic, so honest, so nice.

This is a movie about kindness, yes, and gentleness, yes, but also about intentionality. It's about being kind and gentle not by thoughtless default but with deliberate aforethought, to counter the hate, anger, pain and despair of the world. To fight it.

I think I forgot that lesson from the Mister Rogers of my childhood. But I welcome the reminder. And now I am trying to figure out how to make that happen, and make it happen with the spirit of a child who doesn't know that isn't impossible. Maybe I feel a bit scolded by this movie, that I have lost a certain spirit. Maybe we all need this scolding. ♦

The original print version of this article was headlined "Won't You Be My Neighbor?"

A Beautiful Day in the Neighborhood is not showing in any theaters in the area.