After Enrique was booked into the Spokane County Jail on New Year's Eve, he knew that he couldn't come up with the $200 necessary to post bond and get released. And with rent and bills due in the coming weeks and no set trial date, indefinite incarceration posed serious problems for him and his family.

"It was pretty tough, worrying about rent and bills for my kids," says Enrique, who declined to give his last name. "I have five kids and I was worried."

February's payments were just around the bend, and with Enrique behind bars, he couldn't put in hours at the fertilizer company in Spokane Valley that he's worked at for the past 12 years. "My girlfriend is a stay-at-home mom and she doesn't work," Enrique says. "I would have been out of work and wouldn't have been able to make money and pay the bills."

But then Enrique heard from another inmate about an organization called the Bail Project that would post bail for defendants who couldn't afford it. He eventually met with Sabrina Ryan-Helton, a client advocate with the project, and was bailed out on Jan. 17. As he tells it, Ryan-Helton helped him get a Lyft ride to go to his job right after he was released. "I started working that same night," he says.

Enrique's story is one that the Bail Project, a budding national organization, hopes to replicate many times over. In short, the project wants to show how the cash-bail system unfairly imprisons poor defendants who otherwise would show up to court if provided with support and services. It's not about helping people avoid responsibility for their crimes — Enrique is facing a domestic violence assault charge after an alcohol-fueled disagreement with his girlfriend — but the project hopes to model a more fair, cost-effective system of justice.

"The vast majority of people can be released on their own recognizance," Camilo Ramirez, a Bail Project spokesman says. "When people are provided with adequate support, they come back to court."

In Spokane, the program started training staff and bailing people out back in December. So far, they've posted bail for over 20 people.

Since the project first kicked off early last year, the organization has set-up shop in roughly 10 jurisdictions across the country, including Compton, Tulsa, Detroit and St. Louis. The project uses staff on the ground to identify indigent defendants and then pulls from a revolving national fund to finance their bail. After defendants are released, project staff provide them with court date reminders, voluntary referrals to social services, and assistance with transportation to make sure that they show up at court.

The inmate population that the project is targeting is not insignificant. In Spokane County, the majority of inmates are pretrial, meaning that they haven't been convicted and are awaiting court action. Nationally, 65 percent of all inmates in jails are pretrial, according to 2016 data from the Federal Bureau of Justice Statistics. 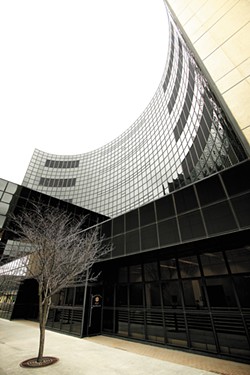 Young Kwak photo
The majority of people in the Spokane County Jail are awaiting trial.

"What we're hoping to do is demonstrate the viability of our model as a better, more humane alternative to cash bail," Ramirez says.

Based out of the Northwest Justice Project office just west of the Spokane County Jail on Broadway Avenue, the two-person local Bail Project team (known as client advocates or "bail disrupters") vets defendant referrals and conducts interviews with the inmates in both the county jail and Geiger Correctional Center. Since the program got off the ground, the team receives an estimated 10 to 25 referrals daily.

This duo has extensive experience in the criminal justice system and they know firsthand the detrimental impacts of incarceration — especially being locked up pretrial.

After client advocate Ryan-Helton, 41, served an eight-year sentence for first-degree assault — she says it was an act of self-defense against an abusive boyfriend — she moved to Spokane in 2007 from Kitsap County where she eventually ended up getting involved in advocacy work for inmates re-entering society.

The other Spokane disrupter, Angel Tomeo Sam, 46, was born and raised in Spokane and is a member of the Colville Tribe. She's done time at both Geiger and the Spokane County Jail. Once, she says, she spent 76 days in the jail held on $5,000 bail, during which she lost her job, housing and went through heroin withdrawls in her cell.

Both describe this past experience as an asset when dealing with clients. "They [the Bail Project] knew what they were doing when they were hiring people with lived experience," Ryan-Helton says. "We can share with them our own experience and they say 'Oh, well if you can do it, maybe I can, too.'"

While the project doesn't use defendants' charges to determine their eligibility for release, they do maintain a soft cap of $5,000 bail to maximize how many people they can help with their revolving fund.

Their efforts hinge on the notion that, more often than not, indigent defendants will return to court if given the proper community and structural supports, eliminating the need for cash bail.

Ramirez cites the organization's long-standing pilot project in New York City, claiming that 95 percent of its roughly 2,000 clients to date came back to court and that 90 percent of their cases closed without a criminal conviction.

"What we learned after 10 years of doing this work in New York City is that most people came back even if they didn't have their money on the line," he says. "It undermined the myth that you need money to bring people back to court."

Instead of willful desire to skip court dates, it's day-to-day hurdles, such as poor public transportation infrastructure, that keep indigent defendants from coming to court, proponents of the project say.

Locally, Sam and Ryan-Helton say they're hearing similar stories from defendants who have extensive histories of failing to appear in court.

"Most people are saying 'I was wrapped up in my addiction, my life was chaos, I was living on the streets and I lost my paperwork so I didn't know when my hearing was," Ryan-Helton says.

That's why the project places so much emphasis on building relationships with clients after their release, getting them help with transportation and connected to services such as drug treatment. (The Spokane-based Empire Health Foundation has given the project a $10,000 grant to help cover transportation costs.) Even actions as simple as leaving messages about upcoming court dates at a mini mart that a homeless defendant frequents goes a long way, Ryan-Helton says.

"If they do bail them out, they meet them at the door and help them get transportation and housing and an ID — all of the things that are needed to get them back to court," says Spokane Superior Court Judge Maryann Moreno. "They don't just pay the money and never see the person again."

In Spokane, and in its other sites across the nation, the Bail Project is also working to gather data on the outcomes of their clients, which they anticipate will show that defendants have better outcomes when they are released and supported throughout the length of their case.

The story has been updated to correct the Empire Health Foundation grant figure.

The original print version of this article was headlined "Prepaid Freedom"