A Hard Day’s Night: Through fires, darkness and falling trees 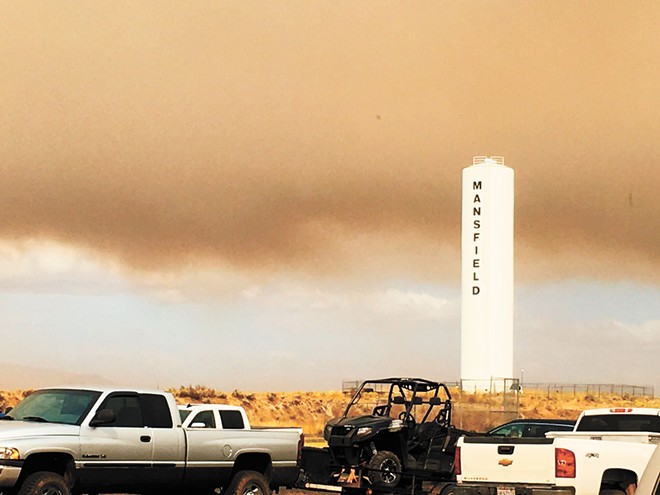 My wife’s grandparents checked the police scanner — farmers in the middle of nowhere Washington have police scanners — but details were sketchy. We checked Facebook, Google, Twitter, Douglas County websites, local news outlets. Nothing told us what to do about these blaring sirens. Grandma called my mother-in-law who was sleeping at the family ranch a few miles away, too far to hear the horn, and woke her in time to see the wildfire rapidly advancing toward her. She and other relatives quickly escaped to town, the sirens stopped, tears fell, neighbors checked on each other, and though the fate of the ranch was unknown, Grandma said as she fixed us all biscuits and gravy, “Let’s try to keep things in perspective.”

Fed and with the immediate danger apparently over, Michelle and I decided to pack our two girls and two dogs into the car and head home to Spokane. The main road out of town was impassable, so we started west, the back way, in hopes of connecting with the U.S. 2 highway.

Unrelenting winds blew dust and smoke. Julia, 3, said from her carseat, “Eww, it’s so foggy out.”

We didn’t correct her, or let on that we were beginning to think we had made a terrible mistake. U.S. 2 turned from white to gray to black. It was 8:30 in the morning, and it was the darkest night I could remember. Michelle slowed the car to a crawl. We could just barely see the road and then, up ahead, a little flashing blue light. The road was closed, and with our hazard lights on, unsure if anyone could see us, we nervously turned around.

We continued driving southwest, looking for a way to connect with Interstate 90. As far as Google Maps and our car’s navigation system could tell us, it was smooth sailing all around. We tried a small highway near Moses Lake, but again the sky quickly went from light gray to pitch-dark. Michelle, our courageous pilot on this trip, turned us around. We couldn’t keep going on like this, but we couldn’t stop either.

What had we done? How stupid could we be?

The girls were sound asleep when we finally reached I-90, near George, Washington, and pointed the car east. We started to get text messages from family still in Mansfield. More fire was coming their way. Some houses had reportedly burned to the ground. All the roads leading out were now closed. The lights went out. They were told to evacuate to the high school, located just a couple football fields away on the edge of the town. They waited in their cars and texted pictures of the foreboding sky.

Back on the interstate, our journey wasn’t over either. Any minute, we figured, it would shut down. Wrecks lined the roadway. I checked my phone: Wildfires and windstorms were hitting huge swaths of Washington and Idaho on what was a long Labor Day weekend, when families across America usually mark the waning days of summer with barbecues and beer — if not, you know, for the pandemic that has kept everyone at a distance.

Say something, my wife demanded from behind the wheel. Talk to me. I’m scared. You’re doing great, I said as enthusiastically as I could manage. Keep going. Twenty more minutes, and we should be through the worst of it, I lied. I was scared, too.

Finally, a half hour outside of Spokane, we could see blue skies and white puffs of cloud. We made it. At home, we hugged, full of gratitude and a little guilt that we had left. We checked in with the people in Mansfield. They had been told to leave the high school and head back home. The power was still out, and fires burned all around them. No one was going anywhere, but at least they were safe.

“Is everyone OK”? I asked, and as they started to answer, a second tree broke in half. I sprinted down the street as the tree tumbled onto our next-door neighbor’s house and car.

The girls and dogs were delighted to be back in our own yard after the long, hard weekend. Then, after maybe an hour, we heard a loud crack, followed by a ground-shaking thump. A towering, maybe 80-foot-tall tree crashed two doors down, landing on a truck, blocking the road and pulling down power lines in the process. Barefoot, I walked toward the neighbors gathered where the tree had once stood.

“Is everyone OK?” I asked, and as they started to answer, a second tree broke in half. I sprinted down the street as the tree tumbled onto our next-door neighbor’s house and car, parked only a few feet from ours.

Michelle grabbed the girls and dogs, and we huddled in the basement — safe, but still unsure which direction the danger would come at us from next. Like tens of thousands of people across the region, our power was now out, and I pulled out the camping lamps that I bought the last time we had to huddle in the dark.

Soon, we heard the reassuring sounds of chainsaws. Neighbors had returned to the fallen trees and began chopping them up — not for any reason besides it needed to be done and they were able to do it. And then around 2 am Tuesday morning, about 12 hours after the trees came down, I woke to the wonderful beep-beep-beep of what I could only assume was a utility truck backing up after having restored power to our block.

Naturally, it’s easy to be struck by the heroics of firefighters and utility workers who race into danger while the rest of us huddle under blankets. It’s also not hard to see that moments like these can bring out the best in people.

But I also hear Grandma Sheila reminding us to keep things in perspective. Michelle and I were certainly lucky, but the world is still burning around us. Windstorms are bringing down trees. Day is becoming night. Public health is becoming partisan. Lies are becoming truth. Too many of us are looking not to fix things, but to purposely add fuel to the fires blocking our path forward.

And then I’m reminded of that road getting darker by the second, of Michelle shaking behind the wheel, of our babies dozing in the backseat, and of this realization: Sometimes, we have no choice but to turn around and try another way home, one guided by a bit more light. ♦