Young Kwak photo
Green living things in your indoor space are always a plus.

Humans literally couldn't survive without plants, whose very existence enables us to breathe oxygenated air. Indoors, however, the relationship is more symbiotic; we contribute to plants' well-being with what we hope is ideal habitat, including water and light. In turn, plants can improve air quality, and both physical and mental health, according to ongoing research. From a purely aesthetic standpoint, plants brighten and enrich our personal spaces with an ever-changing visual dynamic and verdant pop of color — especially welcome on drab days.

Yet, especially for beginners, curating a collection of houseplants may generate as many questions as there are cultivars.

We found answers at the Greenery, Spokane Community College's environmental science horticulture program, of which Tyler Beasley is an alumnus and the longtime greenhouse manager. Beasley's advice: Choose appropriate plants, follow best practices, and know where to get help. 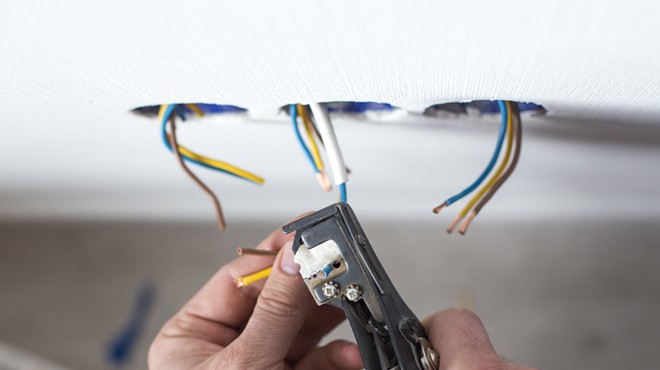 Ficus benjamina is one of Beasley's favorite indoor plants — technically a tree and also known as a weeping fig — because it fulfills his ideal in a houseplant, he says.


"I want it to look good, I want it to be living, but I don't want to have to baby it," says Beasley, whose job includes managing three overflowing 2,000-square-foot greenhouses and the Greenery's retail shop.

Beasley recommends starting with smaller, low-priced plants until you're sure you like them and can sustain them. Choose slower-growing plants with bigger leaves, which are more forgiving of mistakes, like overwatering — the most common cause of houseplant fatalities, he says.

Pothos, spider plants and philodendrons all fit the bill.

Also known as devil's ivy, pothos works well in both hanging and tabletop applications, Beasley says. Pothos' vines grow long and can be easily clipped back to maintain the plant's desired shape. Stick the clippings in a container of water to propagate new growth. Pothos tolerate high- to low-light conditions, and will communicate their need for water by showing a bit of leaf wilt, Beasley says.

"When people have a problem with their plant — it's turning brown or yellow — I ask: 'What are the roots like?'" Beasley says. Brown roots typically indicate too much water.

He also looks at the color of the soil; dark brown means it's damp enough. If dirt is light brown and pulled away from its container, give your verdant friend a drink, he says.

Beasley recommends tap water that's come to room temperature or, even better, been sitting out overnight to allow chlorine to dissipate. Filtered water is another option, says Beasley, who at home uses water from his aquarium.

Avoid watering overhead which can leave spots on leaves and make the plant more vulnerable to disease, Beasley says. Instead, put the pot in a shallow water-filled tray and let it soak up what it needs. 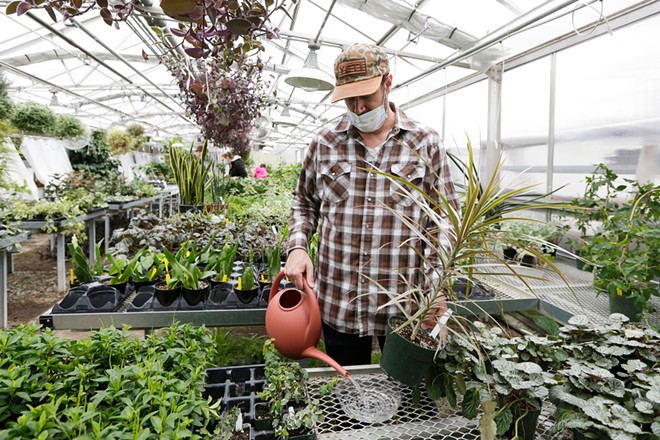 THE DIRT ON SOIL

"One of my very first houseplants was my great-grandmother's Aglaonema modestum [Chinese evergreen] and it was in soil from the outdoors — literally dirt — and a container with no drainage holes," Beasley says. Plants can tolerate poor soils more than we realize, he adds.


To increase the odds of success, use a general soil-less houseplant mix, which has things like peat moss and perlite to help retain water and to promote good aeration so roots don't drown, Beasley says. Actual soil, by comparison, might have more organic matter, but also poor drainage or potential pathogens harmful to tender plants.

Even slow-growing plants may need to be "potted up," transplanting established plants in a succession of slightly larger containers. Don't stick a small plant in a big container, advises Beasley, because as you water all that dirt, the tiny root ball is likely to get too much.

TO FEED OR NOT TO FEED


"The soil is a lot cooler in those short days, and the plant is not as active," says Beasley, who limits transplanting and fertilizing to April to August.

Beasley likes slow-release, balanced fertilizers like Osmacote, which he typically applies only once per season in June and only to the soil.

Still have questions? For any level of houseplant enthusiast, reputable books like The Ortho Problem Solver and educational institutions — try extension.wsu.edu — can be a good resource, says Beasley, who fusses less over his plants now that he has a family and children.

His final bit of advice for people whose plants are beyond saving is pragmatic. "It sounds cutthroat, but I tell them 'Just put them in the compost pile.'" ♦

The original print version of this article was headlined "Viridescent Investment"