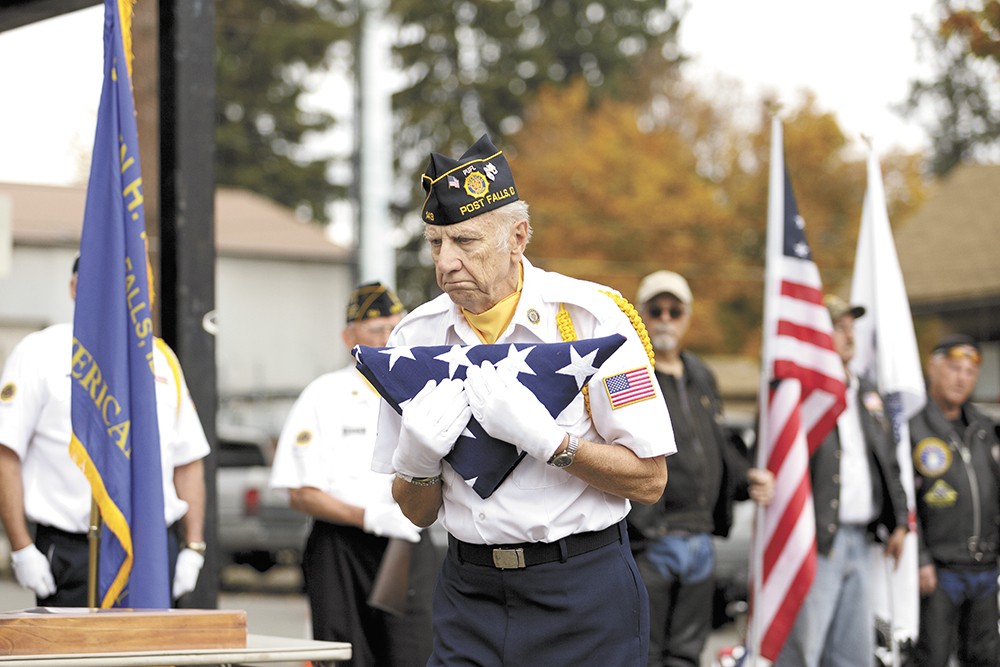 Young Kwak
Sgt. Harold Markiewicz, a member of American Legion Post 143 in Post Falls, delivers a flag to Parkinson's family in his honor.

and he liked it that way. Tucked into the woods on Potlatch Hill in Coeur d'Alene, not far off Interstate 90, a green tarp shielded his tent from rain and passersby.

The 56-year-old military veteran was a very private person. He spent most of his time at his campsite, preferring to be surrounded by a thicket of trees, with a good novel, to the company of most people. He came into town every once in a while to work as a day laborer, to get supplies, to eat at one of the soup kitchens or to check out a new book from the library. But he would only stay a little while.

Because of his lifestyle, not many people knew about Parkinson's personal life. He was a good man, those who knew him say. He was quiet, respectful and humble. He was a loner, but the nearly 70 people who showed up for a memorial service in his honor this past Sunday afternoon suggest that his impact was much greater than one might expect from a reclusive homeless man.

"He always felt there were people worse off than he was," says Matt Gardner, who met Parkinson years ago while they were both homeless. Gardner has since found housing and steady work. "He was such a marvelous guy. He was my friend, and I'm going to miss him."

Parkinson died of smoke inhalation three weeks ago when his camp caught fire. He lived for more than two decades in Coeur d'Alene, most of that time outside. When word spread of a brush fire and a body found on Potlatch Hill, those closest to him waited for confirmation, but they knew it was Parkinson.

This wasn't the first time

that Parkinson's tent had caught fire. During the cold Idaho winters, he used candles or a propane-powered stove to keep warm. Three tealight candles in a zipped-up tent and he'd be comfortable through some of the harshest temperatures, he once told Darla Trinkaus, a member of the board of directors of Cherished Ones Ministries, a nonprofit organization that runs a local soup kitchen.

Trinkaus says that Parkinson's campsite had caught fire a few times before. Once, he almost didn't make it out, he told her. Another time, he stumbled down the hillside and a chunk of bark became lodged in his leg — both incidents likely fueled by alcohol. Recently, Trinkaus says, he had cut back. He was so much more than that anyway, she says.

For Trinkaus, Parkinson was a beacon of humility and someone she trusted with her life. Cherished Ones used to stock portable propane canisters specifically to give to Parkinson. They knew he used them to cook and keep warm. The cans came in packs of two, and whenever Trinkaus tried to give them both to Parkinson, he'd whip out his knife and cut the second one loose.

"I'll be alright with just this one," he would tell her. "Give that other one to somebody else who needs it."

"He would never take more than he needed," says Kevin Kram, the director of Cherished Ones. "He was always concerned that others were taken care of."

Only once in the more than 20 years that Trinkaus had known Parkinson did he accept an offer to stay in her living room. That was during a weeklong stretch when the temperature dipped below freezing. Trinkaus says she had several other homeless men sleeping on her living room floor that winter, but wasn't worried because Parkinson was there.

To his family — he had three sisters — Parkinson was the mischievous brother. Paula Hubeek, his youngest sister, remembers him as a practical joker. He used to put her hand in warm water while she was sleeping.

She looks at an old family photo after the memorial service. 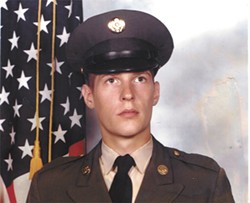 Robert Parkinson served in the U.S. Army from 1979-82. He carried his military papers around with him until the day he died.

"Can't you just see it in those eyes?" she says to her older sister, Sherry Taylor. "He's just got that look like, 'I'm going to get into some trouble.'" They both laugh, remembering the time he shot an arrow straight up into the air and waited for it to come down. That's where the scar just below his eye came from.

For Taylor, who was much closer in age to her brother, Parkinson was a rebel who refused to conform to the rules of society. He went into the Army when he was 18 years old. After serving, he worked sporadically in construction, maintenance and landscaping — whatever work he could get — but struggled to hold a steady job.

"He had a hard time putting down roots and staying in one place," Taylor says of her brother. "He just always wanted to be on the move, seeing new places and meeting new people. He wanted to be doing things his own way, and on his own time."

Parkinson grew up in Auburn, Washington, but lived with his father in Montana for a few years after his parents divorced. They went camping a lot, Taylor says, which is probably where he learned how to survive in the woods.

Over the years, he popped in and out of her life, but always seemed to show up when she needed him most. She recalls the time she'd just filed for bankruptcy and had to move. Out of the blue, Parkinson showed up with a pickup truck to help. Though he didn't have much money, he always made sure to bring her kids Christmas presents when he could afford to. 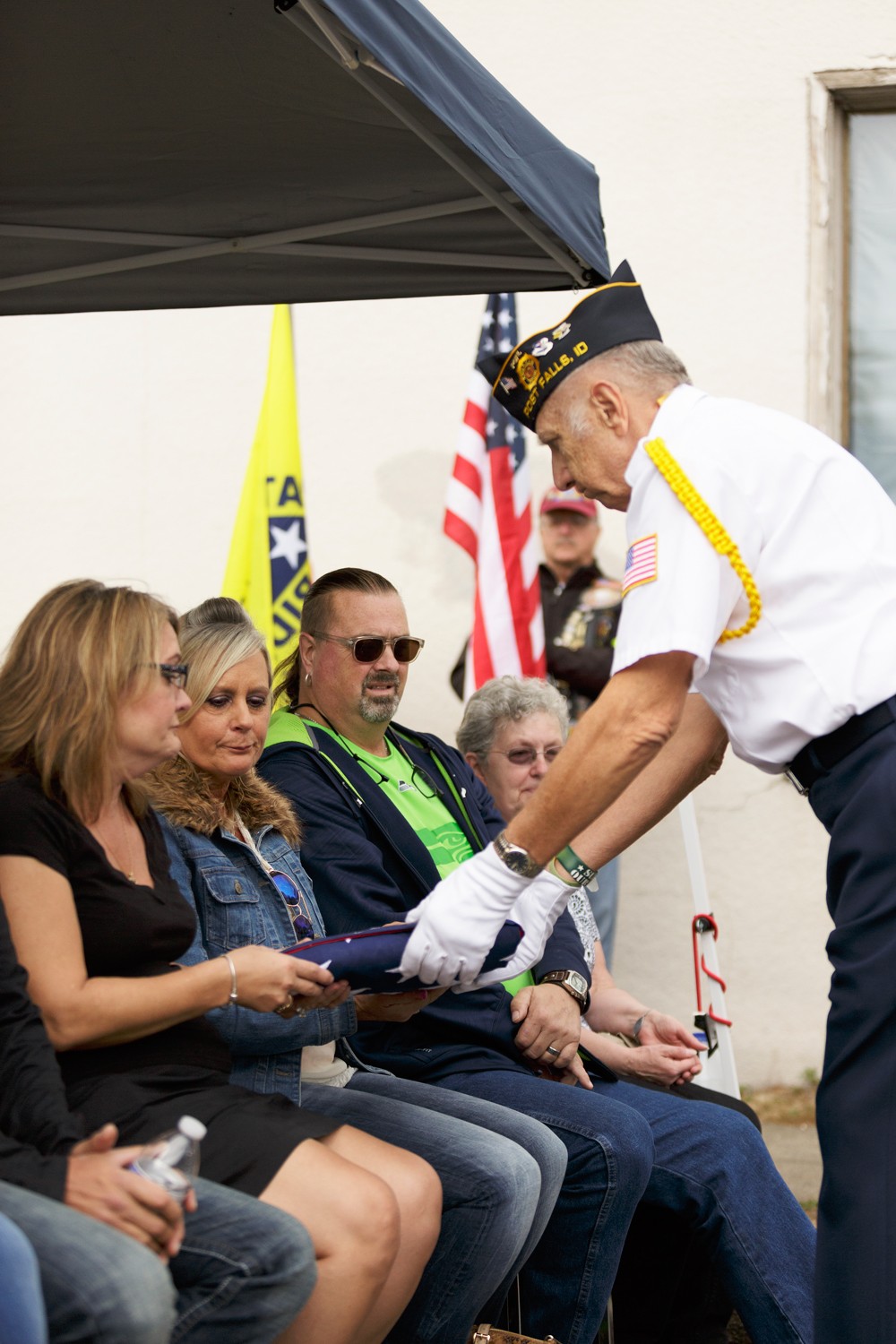 to find Parkinson. He used to sit on a bench outside the Coeur d'Alene Public Library and read, his glasses halfway down his pointed nose. She has requested that the city install a plaque with Parkinson's name and designate the bench as a safe zone for homeless people — a place they can sleep and won't be arrested.

Mayor Steve Widmyer has told her the safe zone probably will not be possible.

For McGruder, Parkinson represents the plight of homeless people in Coeur d'Alene, an area she says has too few places for the homeless to stay at night.

According to the 2015 Point-in-Time Count, a nationwide measurement that counts the number of homeless people in each state, the region that includes Kootenai County has the second largest percentage of Idaho's homeless population — 21.8 percent. Yet only 55 percent are sheltered. Comparatively, Ada County, which includes Boise, has 38.4 percent of the state's homeless population, and 89 percent are sheltered.

"In other cities they don't arrest them, because they recognize they don't have adequate shelter," McGruder says. "But we still do it here. All I'm asking for is one place where they can go and not be arrested."

Just a few years ago, after the frost set in and the wind made it dangerous for people to sleep outside, Parkinson and other homeless veterans helped McGruder build snow caves around the city to help other homeless people keep warm. He did it again the following winter, passing along his knowledge of how to survive harsh North Idaho winters.

It's difficult to say how life will change after Parkinson's death. He mostly kept to himself and stayed out of the spotlight. What's easy to see is what he left behind. If his take-only-what-you-need philosophy and genuine generosity live on through people like Darla Trinkaus, Matt Gardner and Kevin Kram, then his flame will always burn bright.

"This was a great man," fellow homeless veteran Freeman Buckhanan said during Sunday's memorial service. "No life is ever lost as long as it remains in the memory of your heart." ♦