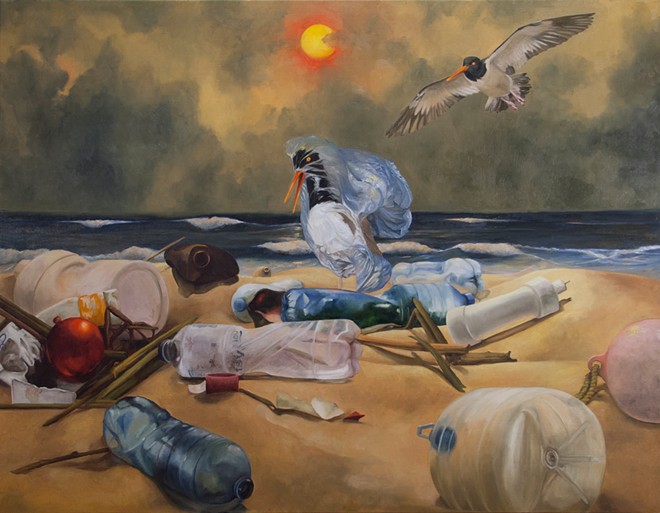 A spoonful of sugar helps the medicine go down, as Mary Poppins used to sing. Sometimes we need to experience something uplifting to better absorb bad news, like the perpetual buzzkill of humans' negative impact on earth and its inhabitants (aka climate change).

That's the gist of EWU's art exhibition On the Edge: Living the Anthropocene, which opened in mid-November and runs through Jan. 13. The show, which includes 16 of Natalie Niblack's oil paintings and drawings and a dozen of Ann Chadwick Reid's cut paper artworks, offers aesthetically compelling visions — you might even call their art beautiful — of climate change. But the content is definitely not sugarcoated, and the artists' shared goal is to promote awareness, discussion and, hopefully, action.

"Natalie and I are both interested in visual seduction as a means of conveying our message," says Reid, who met Niblack when both taught at Skagit Community College. The westside artists reconnected while serving on the board of Anchor Art Space in Anacortes and have collaborated frequently since. This is the third iteration of the show, which addresses the Anthropocene, defined as "the current geological age, viewed as the period during which human activity has been the dominant influence on climate and the environment."

Reid's medium is paper cutting — shapes in the paper are cut away to create the image, much like a stencil — an artform tied to numerous cultures. In China, the country credited with inventing paper, papercuts were ornamental, their elaborate images created to convey "hopes for prosperity and happiness and to prevent disaster," Reid says. "Jewish papercuts have often conveyed biblical or liturgical messages and are used to document weddings and other important cultural occasions."

Similarly, Reid's papercuts draw the viewer in because of their familiar format, intricacy and strong graphic quality — mostly black images against a white background. The content, however, is ominous. Reid highlights the absence of two birds against a tangle of black lines that remind of barbed wire in Bird Gone, and a similar work entitled Bee Gone. At nearly five feet across, Seagrass Besieged suggests a web — seashells, surrounded by delicate grasses and thrush-like birds — being infiltrated by menacing, prickly shapes.

Paper is impermanent, so one message of this work is that nothing lasts forever, says Reid, who also has several artworks using layers of papercuts to achieve a 3D effect.

Reid's papercuts also underscore the fragility of the Samish Island ecosystem she has experienced over the past 25 years. Although the region is renowned for salmon, crab, oysters and other sea creatures, biological threats are numerous and complex. Marine traffic has escalated — oil tankers, fishermen, recreational boaters, cargo vessels. There are pesticides from farms, which are themselves being pushed out for housing, as well as light, noise and other forms of pollution.

"Both Ann and I believe very strongly that this [climate emergency] is the most crucial thing to be addressing in our artwork, both to relieve our feelings, and to get conversations going about climate change," Niblack says.

Niblack's paintings grab viewers' attention through "rich, clean color," she says, as well as high contrast — for example, in the way the candied orange values in Migrations: Tree Swallow amplify the blueness of the birds' feathers. Two columns of black and gray smoke lure your eye upward, while the ground and zigzag of fire atop the mountains in the distance move your eye horizontally, creating two distinct and familiar visual rhythms. There is also discord, however: The birds' flight pattern and the angle of their wings seems awkward. Unnatural. That and the smoke create an undercurrent of dread, pushing against things we are drawn to, like the familiarity of landscape, a dramatic sunset, even fire.

Niblack's work is unsettling by design: oceans full of trash, birds ensnared in plastic or dead, laid out on a numbered grid in Harbingers.

"The ugliness of the content is why I paint it," Niblack says of her socio-political oeuvre. "It needs to be looked at, it needs to be discussed."

"We drove through smoke that month to hang the show and were pretty much sequestered in our hotel room while we were there," says Reid, who reports that Niblack's painting Candle — a burning evergreen silhouetted against a faint grid — prompted a lot of discussion among visitors.

Niblack concedes "the inevitability of participation in the dissolution of the biosphere if you live in this society," she says. "Driving, using plastics, buying goods from the opposite end of the world are necessities for most of us unless we reject the whole of society."

And although she does what she can — protesting, writing legislators, not consuming animals, driving an electric car — she knows the efforts she and others are making are not enough to pull us back from the edge.

"All the protests and volunteering will not take gigatons of carbon out of the atmosphere by 2030," she says. "That takes leadership and consensus at the highest level, which is not happening fast enough." ♦