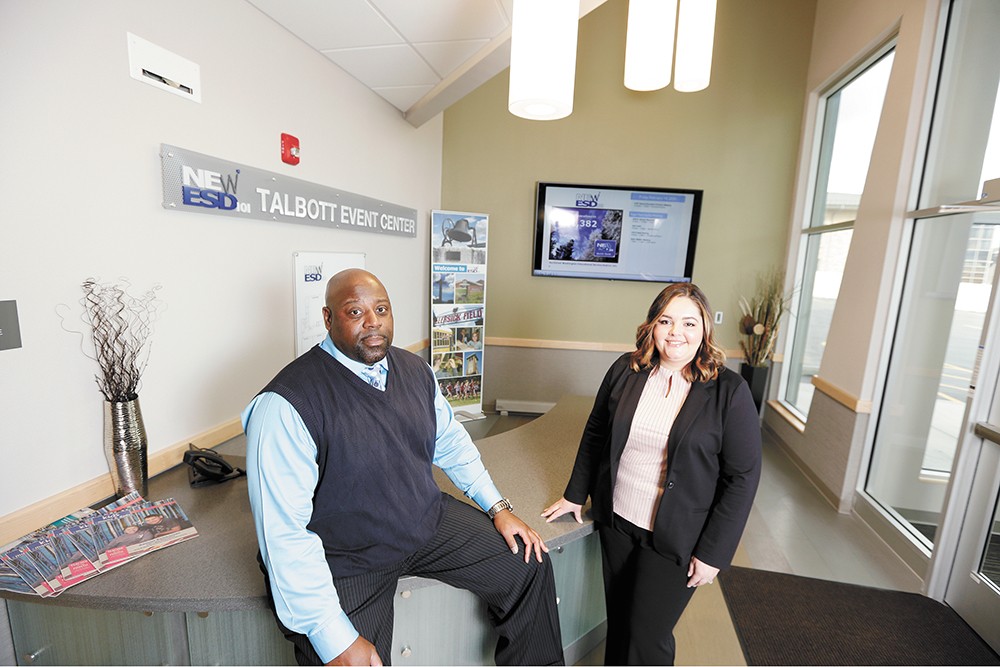 In the days before the 2017 shooting at Freeman High School, there were signs that the alleged shooter, Caleb Sharpe, posed a threat. He made ominous comments to friends. He reportedly expressed a fascination with previous school shootings. He had access to weapons.

That September, Sharpe brought an AR-15 rifle to school and shot four students, injuring three and killing one, Sam Strahan, authorities say. The shooting devastated the community. And with the school shooting in Parkland, Florida, not long afterward, local educators were searching for any way to prevent the next one.

It was for that reason that the NorthEast Washington Educational Service District 101 — a regional office providing services and support for local schools — launched a threat assessment program in summer 2018. The program is headed by regional threat assessment coordinators Leon Covington and Alise Mnati, and it provides training for school districts in Eastern Washington on identifying and responding to student threats. This year, it's expanded to all but two of the 59 school districts in the Eastern Washington region, and by 2020-21 every school in the state is required to have a similar program under state law.

The hope is that threat assessment teams can stand in the way of another tragedy. And as schools continue to be bombarded with threats, these teams play a crucial role in sussing out what's a real threat and what's not.

"We wanted to do something more proactive to try and prevent these things from happening in the future," Covington says.

Since Covington was brought on as threat assessment coordinator in 2018, there have been 179 threats assessed as part of the protocol in local schools. That figure doesn't count Spokane Public Schools, the largest district in the area, or Mead School District, which have their own threat assessment programs.

The system isn't for students who have a suicidal ideation — schools intervene differently in that case. Rather, these are threats of an act of violence against other students, or something they said to a friend or teacher that caused concern. The program involves a team at each school of mental health professionals, school administration and law enforcement personnel. That school-level team is trained by Covington or Mnati, recently hired to join Covington as a second threat assessment coordinator for the region. When a school suspects a student might inflict harm on other students, the team determines its credibility and determines how best to support the student while keeping the school safe. More serious threats are referred to the regional office's own assessment team.

"The whole point of this is we're trying to work across systems and say, 'Let's bring all of our partners together and let's assess this as a team,'" Mnati says.

Then, the team can decide if law enforcement will get involved, if a student needs to be incarcerated, hospitalized or managed differently in school.

But the goal, Covington says, isn't to isolate the student from school. That's counterproductive. He notes that school shooters are often students who have recently been expelled and came back to the school.

"We try to provide an intervention to slow that forward momentum on that path of violence and get back to a good place, by instilling services and support," Covington says. "Let's get them involved in something positive. Let's get them more connected to the school community, as opposed to disconnected from it."

But that doesn't mean there's a profile of a student who would make these threats, Covington says, noting that there were still 37 threat assessments of girls in Eastern Washington. What he's looking for is pre-attack behaviors.

"The first thing is, does this kid have a system of belief? Does a kid have a grievance, or some kind of fixation?" Covington says.

Sometimes, kids may be connected with a violent hate group online, or they've been sharing racist beliefs. Then the team may look at their access to weapons and if they've been planning for an attack.

Spokane Public Schools isn't connected to the regional office's threat assessment team, but the school district implemented its own team before 2018. Both are based on the protocol popularized by the model by the Salem-Keizer School District. That model isn't the one most recommended by the Educator's School Safety Network, which consults in education and emergency response. Rather, they recommend a model out of the University of Virginia. But Amanda Klinger, co-founder of the organization, says the UV model and Salem-Keizer are "two fairly similar models of doing the same thing."

The other Educational Service Districts in Washington state are implementing the same model for threat assessments. That uniformity can be valuable, Klinger says, and Washington is one of the few states where the same program is being implemented statewide.

"The point is not to be punitive," Klinger tells the Inlander. "The point is, how can we keep everyone here safe? And what does that mean for a student behaving a certain way so that student has the right to a free and appropriate education?"

While punishing students isn't the goal of the process, things change when a threat can be considered a crime — even if a kid says it was just a joke. And while schools aim to be less punitive, law enforcement agencies, like the Spokane County Sheriff's Office, find themselves regularly arresting teens for threats.

Earlier this month, a 13-year-old girl who was a student at City School in West Valley made a threat against students on social media that included a specific date. The Sheriff's Office did not think the girl had any plan to carry out the threat, but she was arrested nonetheless on a felony charge.

Gene Sementi, superintendent in West Valley School District which is part of the regional threat assessment program, says it's difficult to balance both supporting students while also teaching them consequences. Sementi thinks the Sheriff's Office is appropriately harsh on students, even if it "breaks his heart that we're at that point."

"I think for the sheriff's department it was a long time getting to this point, with the number of threats, the type, the amount of disruption," Sementi says. "I think they finally decided we've got to send a message that this is no laughing matter."

When the 13-year-old made the threat, he says, the threat assessment team convened. Nearly one-third of students at the school missed the rest of the week. The student was "emergency expelled," which lasts up to 10 days and allows the possibility of returning. And while Sementi says they don't want to overreact to a threat that may not be credible, it's not always wise to return that student to the same school.

"Students figure out who's missing," Sementi says. "Is putting them back a situation where it's impossible to be successful?"

Klinger, the national expert on school safety, says police and prosecutors can be in a tough position when they know a threat isn't for real. But she cautions against going too hard on students.

"I don't know if you're really serving the best interest of the public or student by ruining their lives with really serious criminal prosecutions," Klinger says.

Covington says threat assessment teams take a backseat to law enforcement during their investigations. But they still evaluate students if they've been arrested because it can offer a more holistic view of the student. Mental health professionals can offer them the help they need, for instance, and put them in a school where they can succeed.

In Covington's view, it's not just the school's responsibility to keep schools safe. It's the community's responsibility. The threat assessment program recognizes that, he says.