To hear Kate Lebo and Sam Ligon tell it, there's no small amount of magic in pie and whiskey.

One is "sweet, it's Sunday, it's grandma," says Ligon. The other is "Saturday night." And so ingrained are these mental and emotional associations that it's not necessary to spell out which is which.

"They seem to be these substances that we know a lot about, that we all respond to in a pretty shallow way with just delight, excitement," Lebo says. Which is why, several years ago, she started using pie as a form of "social currency" to break the ice with fellow attendees at the Port Townsend Writers' Conference, where she and Ligon both taught workshops.

Coincidentally, pie was a conversation starter between the two of them.

"Sam was like, 'I can make pie.' And I was like, 'Oh, really? Well, I can make pie too.' What I didn't tell him is that I was working on a cookbook. Later that week we made a couple pies in the communal kitchen at the conference. Had a couple bottles of whiskey and, as it turns out, when you put pie and whiskey together, people come.

"You know writers," she says. "They can be pretty weird."

"Especially anxious," says Lebo. "Wondering who's the most famous person in the room and who to talk to."

"And who's an assho-o-o-ole!" interjects Ligon, drawing out the long o for comedic effect.

The pie-and-whiskey gatherings quickly became "institutionalized" at the conference, he explains, and their popularity prompted them to think of ways they might channel the buzz of the social event into a literary one.

"Our feeling was, why do readings have to suck so bad? Why do readings always have to be boring? I'd been to a reading in Pittsburgh a couple years before that's run by [fiction writer] Sherrie Flick called the Gist Street Reading Series. And when I read there, there were about 300 people at that reading. It was a gigantic party, and I was like, 'Holy shit, this is the best reading in the country,'" Ligon says.

Lebo says she was particularly interested in using pie and whiskey "as a way to get writers' guards down, to get my own guard down as a writer, to get to harder, more transgressive subjects."

The first bona fide Pie & Whiskey reading took place at the Woman's Club of Spokane as part of the 2012 Get Lit! Festival. It was an experiment, nothing more: a pilot amalgam of pie, whiskey, writers and an audience.

"We made 10 pies. We got six fifths [of whiskey]. And we hoped maybe 50 people would come. And, of course, 200 people came," Lebo says. Though the pedantic might note that those numbers have fluctuated in successive retellings, the essence of the anecdote remains the same.

The turnout wasn't the only thing that left them feeling underprepared.

"The other thing we realized quickly that first year was ... that we were probably not going to be able to hold on to the room," says Ligon. "Steve Almond was first, and he screamed for everybody to shut the f—- up, which was hilarious and disarming. And then he just started reading. We were moving those writers fast. Every writer knew she was about to lose the room, so there was all this tension and excitement from the writers, and I think the audience felt that too."

That impulsive, uninhibited energy instantly became a vital and defining characteristic of the performative aspect of Pie & Whiskey, as well as the writing it occasioned.

"What the writers brought was so f—-ing good," Ligon says. Instead of the slightly more general-audience fare at other Get Lit! readings, it was "funnier and darker," dealing with "sex and drugs and food and apostasy," almost always with an overt thematic nod to one or both of the event's cornerstone comestibles. Established authors took part, as did some relative newcomers, a composite that the organizers have tried to maintain since.

"The hard thing for us is [that] being a good writer doesn't mean you're a good reader. ... We're always looking for someone who really knows how to do a performance," Ligon adds. By way of example, he points to Elissa Ball, a local poet who read a "dark, anti-drinking piece" at Pie & Whiskey last year.

"She rocked that performance," Lebo says. "It totally worked." 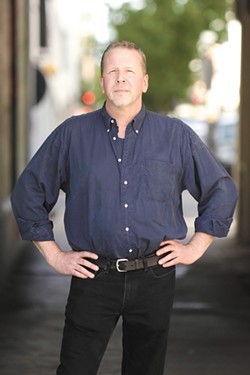 As Pie & Whiskey enters its sixth year and becomes a fixture of Spokane's event calendar ("We want it to be a thing like Bloomsday or Hoopfest," Ligon says), the pair have tried to bottle that spirit in Pie & Whiskey: Writers Under the Influence of Butter & Booze, a collection of reading-related poems and short stories, to be released next week by Sasquatch Books. It includes works by writers including Jess Walter, Tod Marshall, Sherrie Flick, Shawn Vestal, Anthony Doerr and Laura Read, interspersed with semi-traditional pie recipes and cocktail-inspired microfiction.

"We tried to capture that crackling you get from the live experience," Ligon says. "The one thing we're trying to do with what we included in the book is to make it have that feeling and that electricity."

Whether in reading or in hearing, any electric crackle comes down to that essential Manichaean — yet equally American — duality. Pie and whiskey. Prose and performance. Innocence and experience. Sweetness and swagger. Sunday morning and Saturday night. Without one, the other loses color and context.

Or, as Lebo puts it, "The whiskey without the pie gets real dark real fast." ♦