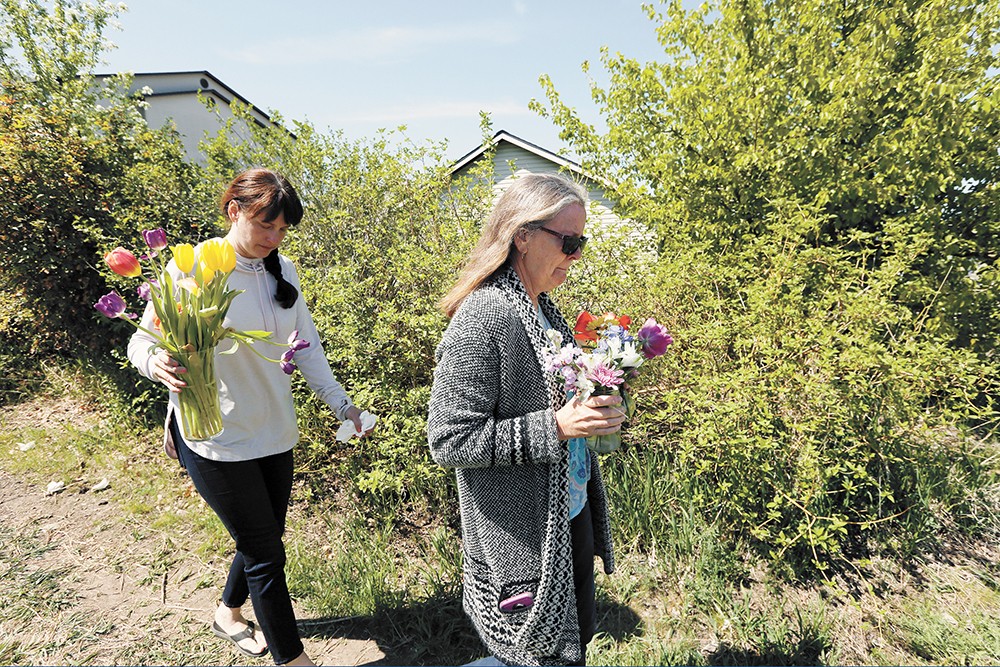 Young Kwak photo
Justine Murray (left) and her mother, Margie Polkowski, bring flowers to the site where Ethan was killed.

Justine Murray, a 43-year-old owner of a boutique in Sandpoint, saw that her phone was buzzing with calls from the medical examiner's office while she was out for lunch with friends. She knew it had to be about her troubled 25-year-old son, Ethan Murray, who suffered from schizophrenia and meth addiction.

"I know what a medical examiner is," she tells the Inlander weeks later at the Tango Cafe in Sandpoint. "It was starting to set in and my heart was racing really fast. And I started shaking."

After leaving her table, she eventually got through to a staffer from the Spokane County Medical Examiner's Office.

Her son, Ethan, died after getting shot by a Spokane County Sheriff's deputy near a small homeless camp a short distance from an apartment complex in Spokane Valley. Two deputies had responded to an early evening 911 call about a male who seemed "very high" around children outside the apartments, only to chase him through the adjacent woods and to a small homeless encampment after he failed to follow verbal commands, according to a news release from investigators.

There, Murray allegedly hurled profanities and reportedly refused to comply with deputies' orders to show them his hands before he was shot, per the release. His mother says an autopsy showed that Ethan was shot six times.

One resident at the apartment complex tells the Inlander that she heard a deputy repeatedly shout "drop it" before firing. No weapon was found at the scene.

For Ethan's mother, his death at the hands of local police was both shocking and the latest tragic development in her son's life that had been practically blown apart by schizophrenia, addiction and routine bouts of homelessness. His struggles with mental illness and methamphetamine landed him in jails, homeless shelters and hospitals around the country — from California to Florida. All the while, his mother grappled with a patchwork of medical and judicial systems, trying to keep him safe and get him the help he clearly needed. She also began advocating for broader awareness on mental health issues, a passion she intends to carry on into the future.

"Maybe that officer thought it was just another homeless guy with nobody and that no one would speak out," she says, referring to the deputy who shot Ethan. "But a lot of people don't speak out and I think that should change.

"It's the system that let him down," she adds.

Originally from Illinois, Ethan, Murray and her daughter, Cora, moved to Sandpoint from Wisconsin roughly 15 years ago. The idea was to be near the mountains and for the kids to go to a local Waldorf school.

But within a couple years, Ethan started showing some challenges and getting into trouble. His teachers said he was smart but socially awkward. He started smoking marijuana at 12 and eventually spent a stint in juvenile detention over a misdemeanor drug possession charge. Murray says she tried everything from the "tough love" of reporting him to law enforcement to seeking out counselors.

Ethan and Justine Murray at Christmas.

At the time, neither she nor anyone else suspected that deeper mental health issues may have been contributing to his behavior.

"It just seemed like basic troubles of a teenager. And even counselors told me that: 'Oh, it's just a phase, oh it's just marijuana. He'll grow out of it.'"

But Ethan's issues continued to escalate. At 17 he dropped out of high school and was in and out of the family home for days at a time. He did obtain his GED and pursued work in the culinary field through a program in Moses Lake. However, he couldn't hold down jobs.

Then came the meth use and a psychotic break: In 2015, he ended up at Murray's house and lit a fire under his old bed. Murray eventually got him down to a hospital in Coeur d'Alene — Bonner County lacks sufficient psychiatric resources, she says — where he was diagnosed with schizophrenia and meth-induced psychosis. She hoped that he could eventually be committed long-term to the regional state psychiatric hospital in Orofino. So Ethan stayed at the hospital, was given medication and waited for a bed to open up.

But once he was admitted to the state hospital, Murray says he was released after only six days and that the "cycle started all over again." From there, Ethan spent roughly two years homeless in numerous states, getting routinely picked up by law enforcement or first responders for abnormal behavior, such as walking down Highway 101 in California or along a train track in Montana.

"Being on medication those two years [in the hospital] and then being released, that was the most stable he's been."

"There might have been a couple times he would end up at home. But he'd be really delusional or very high and would reach out and get help and then finally get frustrated and just leave," Murray says. (She adds that on the occasion that Ethan wound end up back in town, she'd phone local police to inform them of his mental illness and urge them not to shoot him when they ran into him.)

Murray says that during this period she was constantly worried that Ethan might get seriously hurt or die: "I always expected the call. He is gravely disabled and the things he does are not what a normal person would do."

During this period, she began keeping a record of Ethan's movement through journaling and posting about his whereabouts online to keep friends and family in the loop. She also started attending the meetings of a local chapter of the National Alliance on Mental Illness (NAMI). Hearing other people tell their stories of how mental illness impacted them not only helped her manage the stress of Ethan's situation, but also opened her eyes to how widespread the issue is, Murray says.

Ethan ended up in Florida, where he was arrested in June 2017 for stealing a motorized shopping cart from a grocery store. He eventually got admitted to a state psychiatric hospital there, where he remained for a year and a half so that he could be restored to competency. It seemed that he would get the sustained care and treatment that had so far eluded him.

Meanwhile, Murray continued her dive into mental health advocacy. Through her business she organized a bike raffle and a farm-to-table dinner to raise money for NAMI and a local crisis line, and landed on eventual goals of fundraising for better mental health resources in Bonner County. She also helped bring Kissed By God — a film on the now-deceased famous surfer Andy Irons' struggle with bipolar disorder and opioid addiction — to a local movie theater. And she began developing the idea of making a documentary about Ethan's struggle with mental illness and addiction.

"You get this sense of hopelessness when you can't help your loved one," she says. "I guess what I did have control over was just helping break stigma, talking about it."

After Ethan was discharged from the psychiatric hospital to jail, he was quickly released. Murray and her family scrambled to get him on a plane to Sandpoint in an effort to capitalize on his newly stabilized state. (He was back in Idaho by early December.) She got him a life coach, connected him with a doctor, and bought him boots and a hardhat for a job at a local mill that he enthusiastically held for a short period.

"He wanted to come back here and start again," Murray says. "Being on medication those two years [in the hospital] and then being released, that was the most stable he's been."

But it wasn't to last. When Ethan was home, he wasn't on any medication — his doctor didn't feel like he needed medication at the time. In late February, while Murray was in Los Angeles for a weekend to attend the Oscars, Ethan sold his snowboard and bought meth. By the time she got back, he was in a "full-blown attack." Ethan ended up walking along Highway 2 in frigid sub-zero winter temperatures with Murray and Bonner County Sheriff's deputies in tow. (He hadn't committed a crime at that point, so law enforcement wouldn't detain him.) 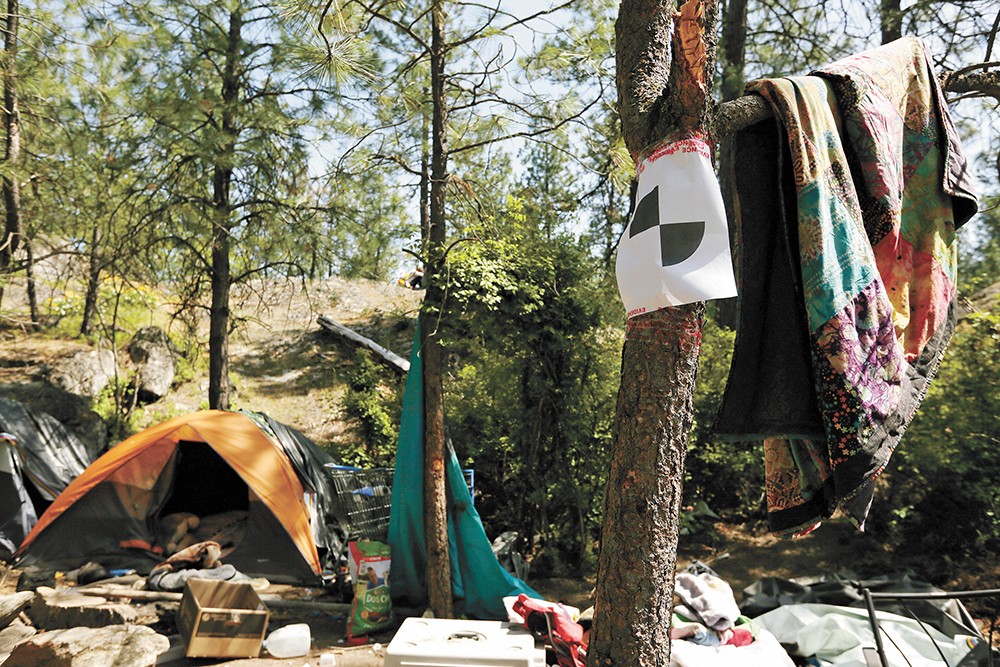 Young Kwak photo
Sheriff's deputies chased Ethan Murray to a nearby homeless camp where he was shot.

After staying out all night, he ended up back at Murray's house, where she found methamphetamine. She called the Sheriff's Office again — in an attempt to keep him safe — and they arrested Ethan. Deputies found more meth on him when they booked him, and tacked on prison contraband felony charge.

But yet again, as had happened so many times before, he was quickly turned back out onto the streets to fend for himself. Ethan was ordered released on March 13 with required weekly drug testing. (Murray says Ethan never was seen by a psychiatric professional while held in the Bonner County Jail.) Eventually he ended up in Spokane, where he had more run-ins with the law: On March 22 he was cited for trespassing on a railroad track near Browne's Addition and booked for an existing warrant out of Bonner County, per court records — only to be released.

Ethan, Murray says, was "just squeezed through the system over and over again."

Murray intends to keep pursuing the documentary about Ethan while she monitors the investigation into his death. (She also has plans to spread his ashes in places like Yosemite National Park and Illinois, where he was born.) The Spokane Police Department is leading the investigation into what happened, and the deputy who shot Murray, Joseph Wallace, has been placed on administrative leave.

"There's other moms, other people that need help," she says. "I don't think there will ever be closure because there just isn't. So I'm just turning it into advocating." ♦

The original print version of this article was headlined "Tragic Expectations"