A Show About Nothing

Ryan Tucker asked his friends to reenact a sitcom with him, and they said yes

When he shows up,

he's already dressed for the part: The dark blue jeans, the tucked-in button-down, the slightly too-white sneakers. And when he sits down at what's filling in for a table at Monk's Diner, across from Jeanette Bocook and her bouffant of brown Elaine Benes hair, Ryan Tucker talks the part, too, with the nasally, sing-songy voice that was the hallmark one of TV's greatest sitcoms.

He can't explain exactly why he's here in a closed restaurant on a Wednesday night, other than that he's the sort of guy who jokes aloud about how funny it would be to make all your friends reenact an entire episode of Seinfeld, then actually follows through with it.

"Caught you? Doin' whaaat?" he says across the table to Casey Strain, who has recently shaved off his beard and donned an oversized winter jacket to play George Costanza.

The players run through the entirety of the episode, which hits the Big Dipper stage next week, calling out for a line when they need it. Missy Narrance plays George's mom, who's laid up in the hospital recovering from a fall after she saw her son... well, you know. She's got the nagging accent mastered and the cast is having trouble keeping a straight face, as they've struggled with for most of the rehearsal.

"We spend most of our time cracking each other up. Not all of us are actors, per se, but we wanted to be a part of it," says Colleen Vice, Tucker's longtime friend and his bandmate in the surf-rock outfit BBBBandits. She's playing Elaine's friend Joyce in the production.

It's a bit on the rough side, but gorgeously so. It looks exactly like what you'd expect from someone who got his friends together to stage an episode of Seinfeld. Or "something like Seinfeld," as Tucker keeps saying, because they don't want to get sued.

"I just thought this would be an inside joke to myself, but now it looks like it's getting some traction, and now I'm getting a little nervous that we're actually going to do it," he says.

But even if — worst-case scenario — it's a train wreck, Tucker still thinks it's all hilarious. The comedy, it seems, lies not only in the genius of Larry David's script, but also in the fact that they're staging the production at all. 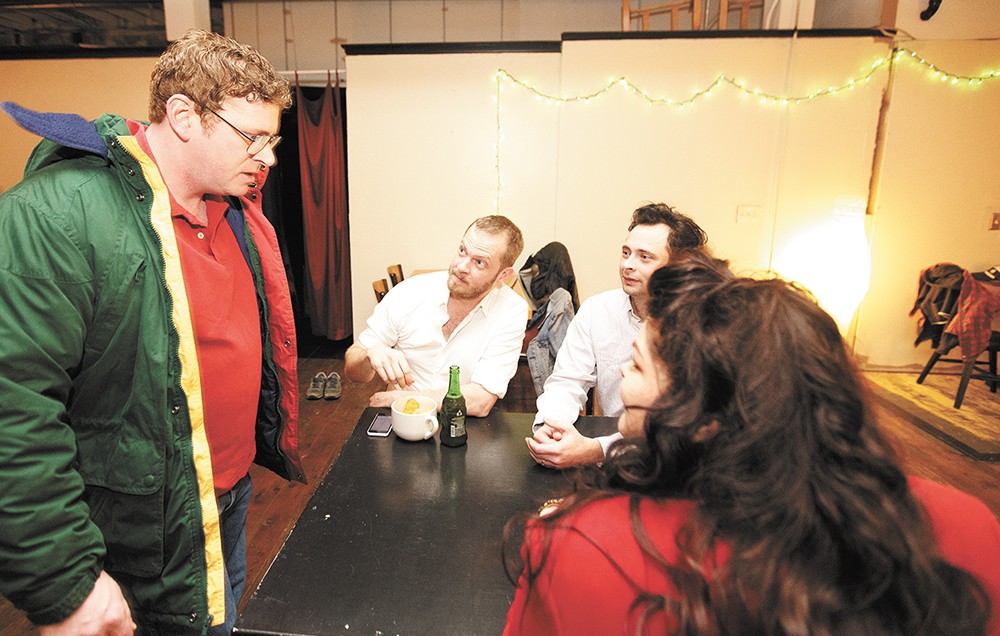 above Tucker's cubicle. He turned 34 a few weeks ago, a reminder that the father of two isn't getting any younger.

He's been at Community Colleges of Spokane for about four years, working in video production. He's cutting a cooking show before he breaks away and sits back in a work area that, in addition to his computer and dual monitors, features an old typewriter, a photo of Katy Perry, a beat-up guitar and a stack of VHS tapes. This is the cubicle where he once filmed a series of YouTube videos of him dancing to pop songs.

Before he was the guy who staged a live Seinfeld episode, Tucker was known as the guitarist for BBBBandits and a host of KSPS' Saturday Night Cinema. He's one of those youngish Spokanites who seem to be everywhere.

"I've been a lazy guy forever, so this is new to me," Tucker says.

He might have been lazy, but Tucker hasn't been uninteresting. He bought a house in West Central when he was 18 years old. He'd been working at Nordstrom, first in the café, then selling men's clothes, at 15 and had the money, so he figured what the hell, he'd do it. One day, he was celebrating a co-worker's 30th anniversary on the job and realized that working sucked, so he took his lunch break and drove his Lincoln Town Car out of town. He landed in Wyoming when his money ran out and washed dishes at a truck stop to get back to Spokane.

Upon his return, Tucker found a brochure for a photography school in Santa Barbara, California. He enrolled there, then transferred to the Los Angeles Film School, where he lived out of a Toyota Camry and worked nights at a gas station to make things viable. After some editing on the Warner Bros. lot and projects for VH1, Tucker headed back to Spokane and eventually made his way into the local film and video industry.

Things changed when Tucker's wife gave birth to their first child, only to see Tucker rush off to Portland with the baby boy for several days of surgery and a couple of months in the NICU.

"He's literally a million-dollar baby," says Tucker, looking up at a photo of his boys, perhaps two of the hippest-dressed kids in Spokane.

Now 5, his boy Coen has cerebral palsy and moves around with the assistance of a walker. He's in a Head Start program and is progressing well, says Tucker. His other son, Townsend, already has his dad's knack for music. Tucker is a family man, but again, that balloon over his desk had him thinking about things.

"Maybe it's a distraction, but I just turned 34, and do I want to just drift into the obscurity of being an old married dude?" he asks, seemingly of every 34-year-old man in America. "Should I buy a polo shirt and tuck it into my khaki shorts and wear some white sneakers? I think it drives you to keep doing silly, fun things."

, the co-owner of Stella's Café — who not only has donated his restaurant as a practice space but also taken on the role of Kramer — are looking out at a naked woman neither they nor their pretend audience can see.

Their castmates, sipping beers and soft drinks at a nearby table, are laughing to the point of distraction and also trying to help the scene along. They jump to the next scene, then the next — Seinfeld had a way of bouncing around like that, you might recall. Tucker says it will make more sense with the show's signature slap bass interludes in between, but in the rehearsal, it's all on the chaotic side. There will be commercial breaks, and more props (cereal boxes, of course) and backdrops, Tucker promises, not that he has to justify any of it at this point. Other venues have already hit up Tucker about doing another production. He's thought about Friends or maybe Golden Girls, or whatever they could pull off.

"Two months ago I posted on Facebook that if I was super rich I'd pay my friends to act out my favorite sitcoms for me. Then someone said, 'I'd do that,'" says Tucker. "So who knows where this could go."♦