A Veteran at Work 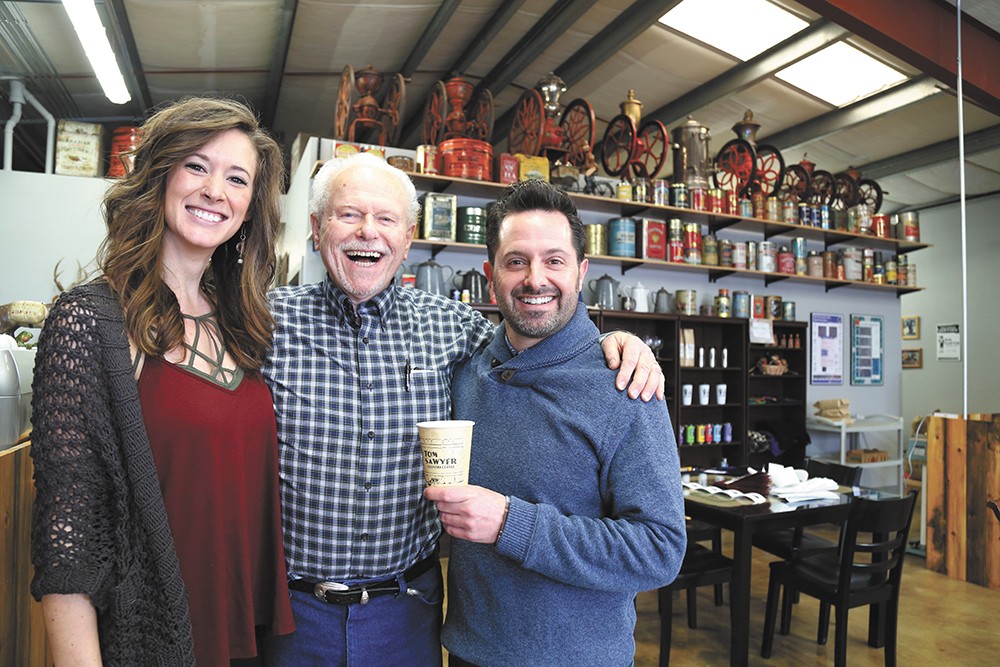 He's already spent 55 years doing that, and at a very successful level. He could be happily retired if he wanted to. Drinks with umbrellas. An RV. Cruise ships. Those sort of things.

But if you stumble into the new Tom Sawyer Country Coffee production facility and café on the north side of Kendall Yards, you'll find the company's 73-year-old namesake and proprietor roasting the next batch.

"I've never gone to work a day in my life. I suppose if I ever had a job I'd have to retire, because you get tired of that stuff," says Sawyer. "I'd love to get 75 years in the industry if this old body holds up. And I'm on the downhill slide. I've only got 20 to go, even if I have to come in in a walker or a wheelchair."

Sawyer started the company in 2009, shortly after relocating to Spokane from Anacortes, Washington, where he and his wife Sandy — they met in the third grade, it's adorable — owned Fidalgo Bay Coffee for 17 years. Before that, he and Sandy spent two decades owning and operating a coffee distribution company in the Seattle area. Even before that, Sawyer had been working at Davies Coffee since 1968.

When he came to town, he figured he'd lend his half-century of coffee knowledge on a part-time basis somewhere, but soon began roasting his own coffee out of a building on his 16-acre property south of Spokane. He figured he'd rather do it on his own, so he trademarked the name Tom Sawyer Country Coffee (Tom is actually his middle name) and the company was born. Soon, it was filling orders from around the country.

"I figured if I was going to be doing it, I might as well be getting the rewards on the other end," says Sawyer.

Last spring, the company bought a converted warehouse in Kendall Yards and in late October opened its doors as a coffee shop and roaster. The space is cozy, decorated with coffee tins and antique coffee grinders Sawyer has collected during his travels.

"I'm not the only old thing in here," he jokes of the relics that make a stop in for a quick cup a crash course in coffee history.

There, you can buy most of Tom Sawyer's long list of coffees, and also have something whipped up hot for you to drink as you watch Sawyer himself at work. Soon, the new spot will begin offering tasting events, coffee-making classes and more. Sawyer also wants to continue his career-long aim of helping nonprofit organizations through coffee, most recently with the rich, aromatic Wounded Warrior blend, which sends $3 of every pound to the foundation that helps disabled veterans.

For Sawyer, the new shop also is a chance to meet his customers, something that he couldn't do merely as a wholesaler.

"I get to greet them at the front door and serve them and thank them, and you get to see them enjoying your product," he says. ♦