Nothing is out of reach in the realm of casual role-playing. 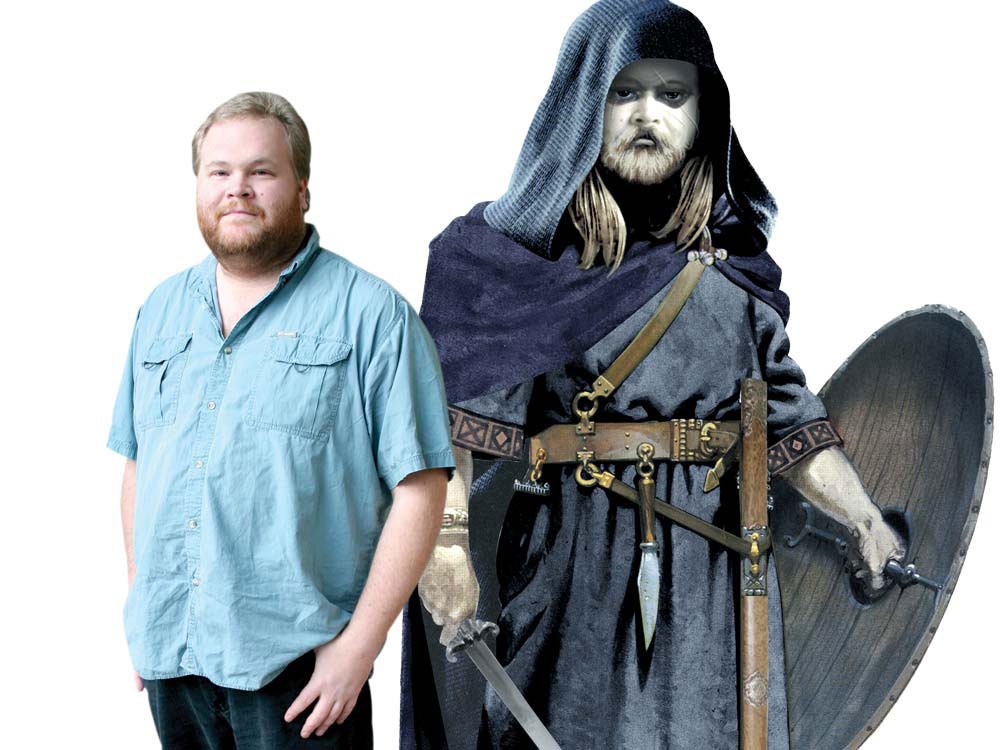 "I've fought demons and monsters and giant bugs and evil humans and wizards and warriors,” says Sorrow, a silver-haired elf whose pale skin is bubbled with scars. “I don’t care to relate how many have died at my hands or my magic, as my goal is preservation. But oftentimes, those bent upon a path of destruction understand nothing but the cold of my steel or heat of my blood.”

Sorrow talks elusively and vaguely, hinting occasionally at some dark spot in his past.

“I can never fully make up for what I did, but I strive to aid as many as possible, that they may never know the types of horrors I unleashed,” he says softly.

Sorrow may not be forthcoming about the nature of his sins, but if you’re curious, you could always just ask David Thompson. For six months, they were the same being.

Thompson, a 36-year-old husband and father who runs the IT department at WSU’s Small Business Development Center, has been a role-player for 26 years. Sorrow was one of his most memorable characters.

He played the robed elf until it was paralyzed by a psi-stalker, and then killed in an explosion. But Thompson has also portrayed an aspiring off-Broadway actor, a god- like being who spent years planning a war, an archer, an orc, a princess.

It’s this diversity, this freedom, that gamers say makes role-playing addictive. Written on the back of one of his game books is the phrase “Anything You Want.”

Though role-playing commonly evokes images of either tabletop gaming, like Dungeons & Dragons, or “LARPing” (in which players dress up as characters and act out their games), the activities of Thompson and others fall into another category: casual role-playing.

This style can be hard to wrap your head around, because there are no boards, no prepackaged characters, no visual aids. Games begin with only the game book, some paperwork and, sometimes, dice. Everything else is up to the gamers.

The group starts out by selecting a scenario — anything from fantasy to modern-day to zombie apocalypse. Games can last one day or several months, and some might never even result in a win.

After the scenario is chosen, players design their characters — a process that can take hours, as they sift through game books and tease out even the most mundane traits: favorite books, alcohol tolerance, nervous ticks. Thompson says this allows the player to become more involved in the character.

“If you look at a really good actor, [they] will often take a lot of roles and add a lot of [their] core personality traits to them,” he says. “When you make a character, you have to invest part of yourself into the character, so there are always little bits … that are you.”

Half a dozen gamers sit on sofas and chairs, surrounding a table covered in pretzels and cake in Thompson’s Valley basement. They’re playing Amber, a free-form game with few rules and no dice that’s based on the series of science-fiction novels by Roger Zelazny.

They have been playing this game every Sunday for four months and, for a newcomer, it’s nearly impossible to pick up the complex story. The players seem to be portraying a group of royals from the city of Amber, which is the center of the universe. These beings have the ability to travel and live in different dimensions, called “shadows.” The king has gone missing, and this group has been assembled to travel through the shadows to find him.

One player cracks a soda while the others begin to navigate the storyline. The few who aren’t involved in the current scene are on their phones, texting or emailing their strategies to Thompson, the gamemaster. It’s his job to lead the characters through the game, intermittently consulting a 200-page book he wrote, which complements the official Amber game book.

The players that are directly involved slip into character and begin.

Thompson’s wife, Carmen, plays Inari, an Amberite. Her wit and humor come through in her character as she says, sarcastically, “I would graciously build a castle for you to reclaim.”

The other players smile, and there is an impenetrable flurry of character dialogue and laughter.

“I’m still in favor of that,” says one character. “My manager will be quite happy to accommodate your needs,” Inari tags on, sneering.

They laugh again, all in on a story and a joke known only to them.

“Some moments of game history, much like movie quotes, live on forever amongst those that know them,” says Thompson.

People still talk about Sorrow, for example. Thompson invested so much in the role — conveying in excruciating detail Sorrow’s strange behavior, his gaunt frame and maggot infestation — that it had a physical effect on other players.

“People in real life found him revolting,” says Thompson. “They would start to get sick.”

But he says the fundamentals of Sorrow’s character — how he rose from a dark place and into a good one, living a life to help others — stem from real-life experience.

“There have been parts of my life where I haven’t necessarily been so good. Now, in my life, especially for the last 10 years, [since] my daughter was born, there has been a real reversal from that being-bad to being-good kind of trend,” he says. “The character got to be far worse than I ever was. But he also got to be far better. It was a caricature of my life. We exaggerated the bad and we exaggerated the good.”

Thompson says gaming has extended into other parts of his life, benefiting him both as a husband and father. He plays games with Carmen, and together they spin creative stories their children can’t hear anywhere else.

“The kids are learning to use their imaginations and creativity even more, and understand that they can keep those even as adults,” Thompson says.

It’s after midnight when the gamers finally step out of Amber and back into Thompson’s basement. For the next hour, they take the time to relax and cool off as they discuss what happened in the game, talk about plans and, as Thompson puts it, “let reality re-exert itself.”

“We live in a world of make-believe and belief,” says Thompson, smiling.


Those interested in casual role-play can check out the message boards at Merlyn’s Science Fiction-Fantasy Store in-store and on the web at merlyns.biz. Other sites to locate gamers are http://www.obsidianportal.com, http://www.sjgames.com and http://spokane.craigslist.org.

We're in the golden age of really weird video games

Yes, video games are getting better, but they're also becoming huge in size

Spokane's Lester Bloom is living a childhood dream making video games; his first solo project PlanTechtor is out this month