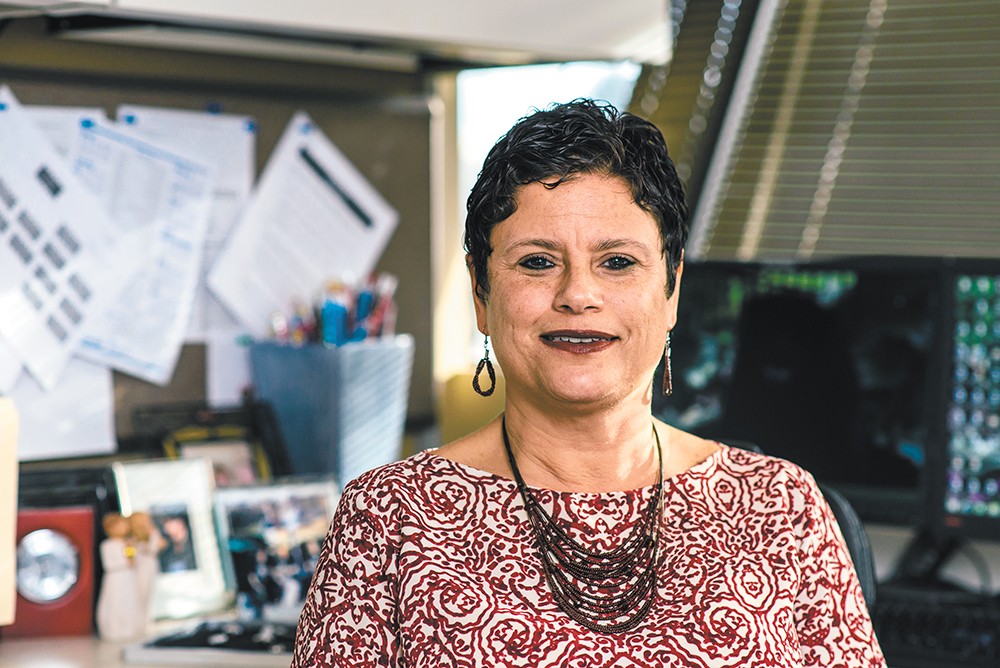 Lisa Pacheco took over as director of special education

at Spokane Public Schools in a period of upheaval.

She succeeded Laura Pieper, who resigned in 2016 after a brief stint as special education director where she accused her own district of discriminating against special education students. Yet some community activists and parents agreed with Pieper that special needs students were often mistreated. And when Pacheco took over, the direction of special education in Spokane Public Schools, where more than 16 percent of students receive special education services, was unclear.

Pacheco didn't seek to silence criticism of the district. Instead, she sought it out.

"I wanted to create community and create trust and make sure people have a voice," Pacheco says.

Two years after Pacheco became the district's special education director, the community still has concerns about special education in Spokane. But now, there's a sense of optimism that comes with it. The district, after an outside agency conducted a study of special education, knows what problems need to be addressed. And now it has a road map for a structural change.

The study was conducted by Urban Special Education Leadership Collaborative, a national network that aims to improve outcomes for students with disabilities. It validated many concerns raised by those involved with special education in Spokane: that high turnover of department leadership leads to communication problems with teachers; that students with behavioral problems are often not provided the support they need; and that students with disabilities are subjected to classroom environments not conducive to their needs.

It was exactly the kind of input Pacheco and the district wanted.

"We felt like, as a system, that we needed to have a strong vision — what is it that we believe as a system around meeting the needs of students with special needs?" Pacheco says.

Shawn Jordan presented to the School Board a list of 20 different ways to change special education, based on the Urban Collaborative study recommendations. Some of the changes were easy or had already been made: things like creating a vision statement and changing policy on the use of isolation and restraint.

Others will prove more difficult, he tells the Inlander.

"I think this study is highlighting where we are and where we need to go," he says.

The most significant issues involve the behavior intervention (BI) programs in Spokane schools. The district has been trying to include BI students into general education classes. But the report backs up what teachers have been saying about the move to inclusion in elementary school: There's a "lack of clarity" on how to support those students, either in BI classes or general classes.

"What our teachers want to see is the necessary supports and resources to be able to deliver instruction to our students," says Katy Henry, president of the Spokane Education Association. "Not every student is the same — some require more supports than others."

The Urban Collaborative highlights one school in the district that has a BI program students can use throughout the day as they need them, instead of having students separated from BI classrooms and general classrooms. Additionally, the report recommends that teachers receive more training in de-escalation techniques and alternatives to suspensions and restraints.

But perhaps the biggest area in question raised by the report was Eagle Peak, a school that aims to provide extra resources for students with special needs. It's a school where students with more severe behavioral issues often attend, but parents have complained that it's too restrictive and ends up punishing students for their disabilities.

Indeed, the study took issue with Eagle Peak's practice putting BI students with other students of special needs at Eagle Peak and other schools. Essentially, the report says students with special needs who do not need BI services are receiving it anyway, possibly in violation of federal regulations. That can lead to students being punished more harshly than they would be otherwise.

Nikki Lockwood, a parent who has led efforts to reduce exclusionary discipline in Spokane Public Schools, says she's heard similar complaints from other parents for years.

"I think the report is really reflective of the need for some work," Lockwood says. "I'm happy that the district took that step and they're putting staff time around addressing issues brought up in the report."

Lockwood's idea is that if schools support BI classrooms more in earlier grades, then they won't need to end up at Eagle Peak at all.

That thinking falls somewhat in line with the district's goals. Pacheco, as a former special education teacher for 12 years, says kids shouldn't be in BI classrooms or schools like Eagle Peak if they don't need to be.

"We believe it's important for students to learn skills so they can be more successful in a gen-ed setting," Pacheco says.

Spokane Public Schools plans to address each recommendation in the report, with one exception: an Urban Collaborative suggestion that the district create a new alternative school for students at risk of failing out of their regular school. Nearly two-thirds of districts nationwide offer such a school, but Spokane doesn't. And that can lead to students with special needs but not in a BI program being placed in a more restrictive BI setting at Eagle Peak.

Jordan says creating such a school would be no small undertaking, and the district needs to do further study before deciding on that as an option.

On a larger scale, implementing any changes means changing the culture of special education in all of Spokane's schools. For Pacheco, that means clearly identifying system-wide issues, and communicating a vision to address them.

"There were several recommendations from the Urban Collaborative study that were systemic," Pacheco says. "And now there's a real focus to address those." ♦

The original print version of this article was headlined "Finding Stability"