Alumni get last look into the old Mead Junior High

The gloomy skies didn’t necessarily reflect the mood in the building previously known as Mead Junior High on Thursday evening, as alumni and community members were given one last opportunity to roam the halls.

The building, which has been empty of students since 2004, is scheduled to be torn down in the fall. Construction on the sports and performing arts complex that will be built in its place has already begun and should be complete by October 2020, according to Ned Wendle, executive director of facilities in the Mead School District.

The last walkthrough was less of a tour, and more of a free-for-all chance to get a last glance inside the building where many in attendance spent their formative teenage years. Small groups gathered in the halls, gym, cafeteria and classrooms to reminisce and recall their teachers, lessons and friends.

Wendle says the district decided to host the event after the superintendent’s assistant received many phone calls from alumni expressing an interest in being able to look around the school before construction on it begins.

Though classrooms were empty of desks and supplies, many say the school looked the same as in their memories.

Melaine Walker, who graduated from the school when it was a high school in 1969, says the home ec room is exactly the same today as it was while she attended the school.

Jim Pounder, high school class of 1954, remembers watching the gym get built by his father. He says when he was in junior high, he would come over after school and help his father clean up the construction site.

“When I heard we could get in the building before it’s gone I had to come,” he says. “My father helped build it and now it’s going to be gone. I have a lot of good memories.”

The halls and classrooms almost resemble a ghost town. Some still have instructions or drawing on the chalk boards. The picnic tables in the courtyard have weeds wrapping around the legs and seats. Paint splattered on the sinks and counters in the art room is dry and chipping.

The crowd of attendees brought a life to the school that it likely hasn’t seen in over a decade. Reunions of classmates, teachers, students and coaches took place in nearly every classroom. One classroom which has a wall of windows that once overlooked the football and baseball fields — now a dirt lot with construction equipment — attracted many former athletes who reminisced together about their days in cleats. Others took photos in front of their old lockers, or where the table they remembered eating lunch every day once stood. 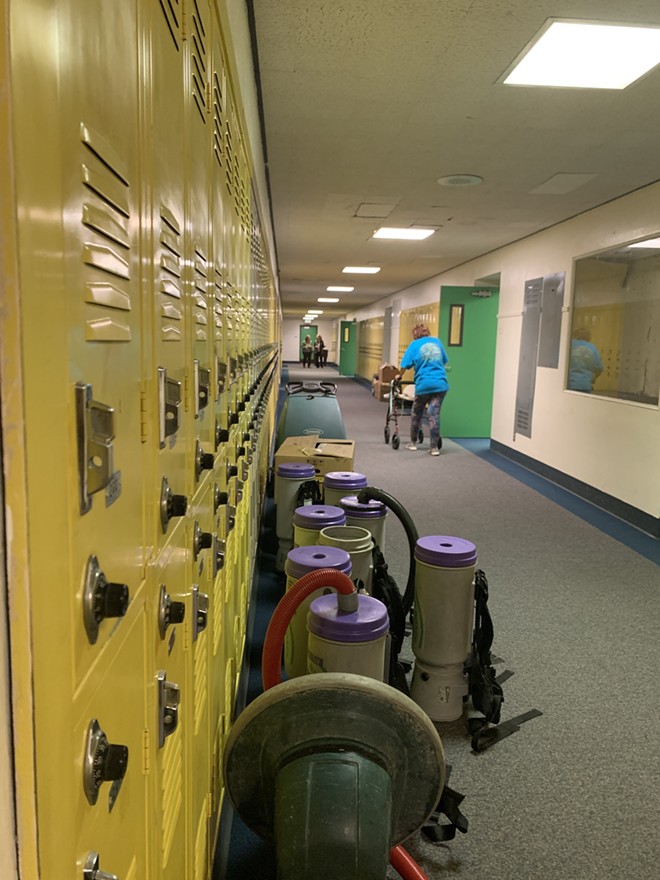 Morgan Scheerer photo
The halls in Mead Jr High are now stacked with old cleaning supplies.
Though many say they were sad to see the building go, most seemed to agree that the construction is the right move.

Michelle Blessent, who attended the junior high from 1987-1989, fondly remembers her time spent in the gym playing volleyball and dancing at school dances. Morgan Scheerer photo
Attendees gather in the home ec room. Some took cooking boards as a keepsake.
Michelle attended the event with her father, John Blessent, who graduated from the high school in 1964. He proudly sported his royal blue varsity sweater, emblazoned with a gold ‘M’ and a panther patch on the back. He says he could go on forever about his memories in the building.

Memories and photos weren’t enough for some in attendance, though. Many alumni took cutting boards from the home ec room to remember the school by.

A layer of nostalgia connected the crowd of well over a hundred people in attendance, as they remembered the past in the building. The construction happening all around the building, though, couldn’t help but to force attendees to also look toward the future.