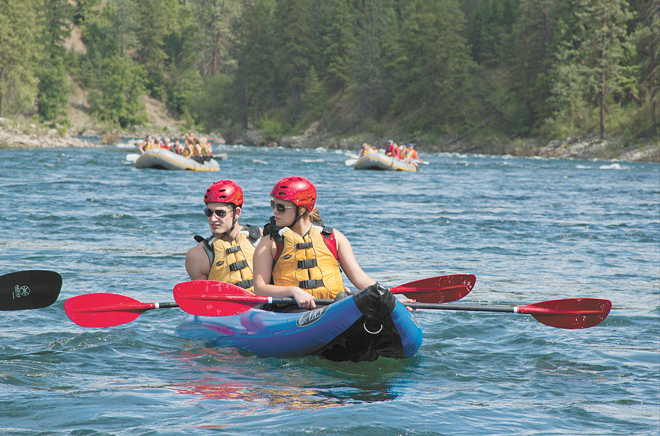 Nicholas Grauert photo
Recreational river users float in calm water before hitting rapids in the lower end of the Spokane River.
Environmental and recreational groups got a win from an appeals court this week when it was ruled that the Washington state Department of Ecology didn't take a variety of uses of the Spokane River — specifically recreational uses — into account when making an in-stream flow rule for the watershed.

The 2015 rule, which set the minimum stream flow for summer months in the Spokane River at 850 cubic feet per second, affects how Ecology manages junior water rights in the watershed. Essentially, if flows dipped below that minimum, those with water rights issued after the rule took affect could be required not to draw water from the Spokane Valley Rathdrum Prairie Aquifer or watershed.

But the Center for Environmental Law & Policy (CELP), rafting company American Whitewater, and Sierra Club all argued the rule wasn't protective enough of all uses, since it set the minimum stream flow based only on what's protective for fish, without taking recreational uses into account. They argued that larger flows are needed if rafting and boating uses on the river were to be protected.

On June 26 the river advocates were handed a partial victory from the Washington Court of Appeals, Division II. While the court specifically said that Ecology isn't required to protect all uses — sometimes one use might have to be prioritized over another — it also said that the agency needed to at least consider those other uses and impacts on them when making rules. Since fish were the only focus, the court held the in-stream flow rule is arbitrary and capricious and therefore not legal.

"During hot summer months, Spokane River flows must be protected for community recreational and aesthetic use, as well as fish and wildlife," said John Osborn, conservation chair for the local Sierra Club’s Upper Columbia River Group, in a news release Thursday, June 27. "The Department of Ecology, which has a long record of issuing water rights to the point of endangering rivers and aquifers, should not be allowed to further degrade the Spokane River by leaving open the door for more water rights."

One of the issues brought up during the case was that Avista's federal licenses for its dams on the Spokane River only require a minimum stream flow for those months of 850 cubic feet per second. Ecology tried to argue that it couldn't therefore set the minimum at a higher amount, but that was a bit of a red herring, says Andrew Hawley, an attorney for the Western Environmental Law Center who worked on the case.

"The point of the minimum in-stream flow rule is to say this what the river needs, at a minimum, to be healthy," Hawley says. "Regardless of what Avista does or doesn't do upstream, Ecology’s rule has to be based on the science and the analysis of what we need in Spokane. Yes, Avista is only required to release whatever flow its license says, but that could change, and it doesn’t change what the fish need and what recreational users need."

Ecology can choose to appeal the decision to the state Supreme Court in coming weeks, or go back and change the rule.

"We regard this as a potential win," White says. "If Ecology goes back and rewrites that in-stream flow rule and revises that 850 upward, that’s nothing but good. It doesn't guarantee water, but it certainly guarantees protection for the water that is there."