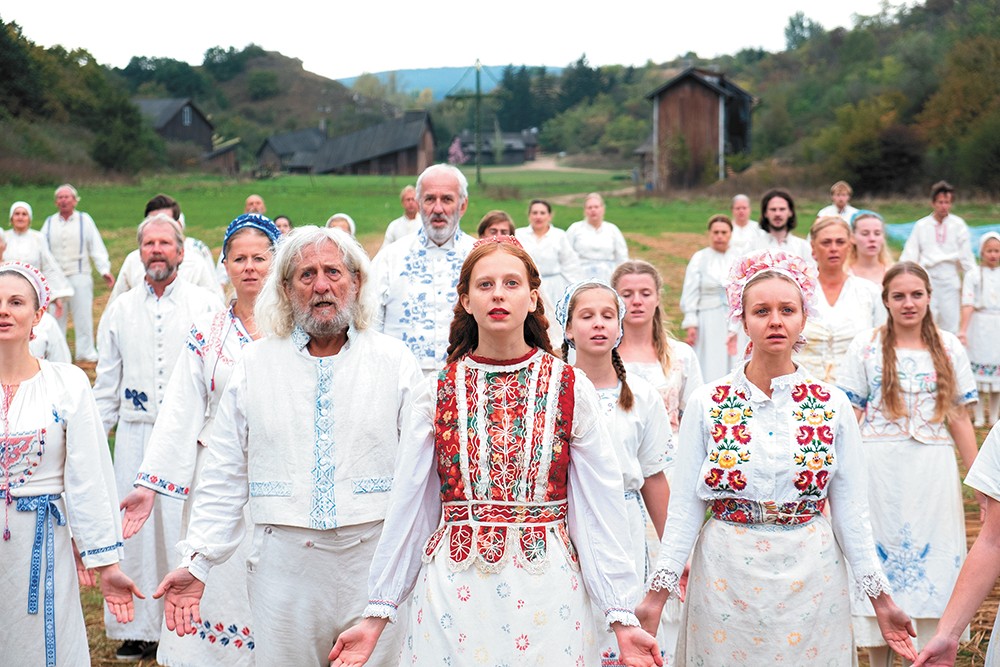 The maniacal, methodical Midsommar does for Scandinavian tourism what Jaws did for the beach.

Ari Aster's 2018 horror sensation Hereditary sometimes felt like the work of a filmmaker who wasn't sure he'd ever get the chance to make another feature film, and was throwing in every possible idea he had just in case this was his only shot. The result was a collection of creepy, unsettling moments that never quite came together. Aster is an expert at freaking the audience out, but Hereditary showed that he was more adept at atmosphere than plot construction.

With his second feature, Midsommar, Aster delivers a much more streamlined story, along with the same disturbing atmosphere and intense, dedicated performances. It's less jarring and unpredictable, but ultimately more satisfying.

As soon as Swedish grad student Pelle (Vilhelm Blomgren) invites a group of his American friends to a festival at the remote commune in Sweden where he grew up, it's fairly obvious what's going to happen to the main characters. They are definitely not going to have a fun, educational trip to Europe, and strained couple Dani (Florence Pugh) and Christian (Jack Reynor) are definitely not going to fix their clearly doomed relationship. The movie opens with Dani in crisis as she experiences a family tragedy, and Christian, who was on the verge of breaking up with her, instead ends up inviting her on his bro trip to Sweden, an invitation he hopes and expects she'll decline.

But Dani tags along anyway, and there's plenty of tension in the group even before they arrive in Halsingland, where the residents welcome them with far too much enthusiasm and immediately encourage them to participate in the commune's odd, off-putting rituals. Christian and Josh (William Jackson Harper) are both anthropology students, so instead of being weirded out, they're fascinated, and that helps lull the other characters into a false sense of security, even after they witness some pretty messed-up stuff. The plot proceeds on a relatively straightforward and even predictable path, but Aster takes his time establishing the intricate details of life at Halsingland, and the gorgeous costumes and sets are impeccably designed and crafted, adding to the movie's immersive, otherworldly qualities.

Part of the reason that Dani and Christian don't immediately run away from their hosts is that they're still consumed with their interpersonal drama, a passive-aggressive tug-of-war between two people who obviously don't want to be together but can't bring themselves to let go of their relationship. Pugh gives a much more subdued performance than Toni Collette's acclaimed turn in Hereditary, but she's equally fantastic in her own way, especially during the movie's opening stretch, when Dani has to deal with the unthinkable at home before she even gets to the pastel Swedish murder cult.

The dudes get less of a chance to shine, but Will Poulter delivers another in his fine-tuned portraits of entitled douchebags as the group's frattiest member, and all three of the American men are prime examples of toxic masculinity. Although it's not always clear what the cult's ultimate goal is, they seem to be on Dani's side more often than not, and there's a perverse pleasure in seeing these clueless man-boys get what's coming to them.

Perverse pleasure could be the mission statement of this movie, which is slow and methodical but also often morbidly funny and gleefully sadistic. The climax unfolds like the director is personally torturing his characters, picking them apart bit by bit, and the movie owes as much to the cine-masochism of Lars von Trier as it does to pastoral horror movies like The Wicker Man. It's a sort of cathartic ritual, in which the characters and the audience are equally unwitting participants. ♦

The original print version of this article was headlined "Cruel Summer"

Midsommar is not showing in any theaters in the area.

The X-Men series (reportedly) concludes with the underwhelming Dark Phoenix