Ryan Miller was eager to get the COVID-19 vaccine as soon as he could. But in early April, Miller — a 47-year-old graphic designer and brother of the famed Myst developers— still wasn't eligible in Washington.

Then he heard of a place in Post Falls, Idaho, that needed to use extra doses that would otherwise go to waste.

"We'd heard from friends that everybody was going there," Miller tells the Inlander.

He made an appointment using his Washington address, then drove with his wife and daughter to a Post Falls strip mall where representatives from Northwest Specialty Hospital jabbed them in the arm with Pfizer vaccines.

The Washington COVID dashboard says that its public data counting people initiating vaccination "includes doses given out-of-state to Washington residents." But that's only true in rare cases when a person's provider notifies the state that a Washington resident was vaccinated.

In fact, because Miller was vaccinated out of the state, it's unlikely Washington would have any record of his COVID-19 vaccination in the state system. That means he wouldn't be eligible for the state's vaccine lottery. It also means he isn't counted in the state's data showing how many people have been vaccinated — a metric Washington is using to decide when to lift the final COVID restrictions.

Miller is not alone. As of June 9, at least 5,680 people from Spokane County had gone to Idaho to get vaccinated, the Idaho Department of Health and Welfare tells the Inlander. Since they were vaccinated outside their home state, most of those people are probably not counted in vaccination rates in either Idaho or Washington, health officials say.

In Spokane County, a difference of 5,680 fully vaccinated people would bump the percentage of people age 16 and older who have been vaccinated by 1.4 percentage points, to about 46.3 percent vaccinated, based on the state dashboard. 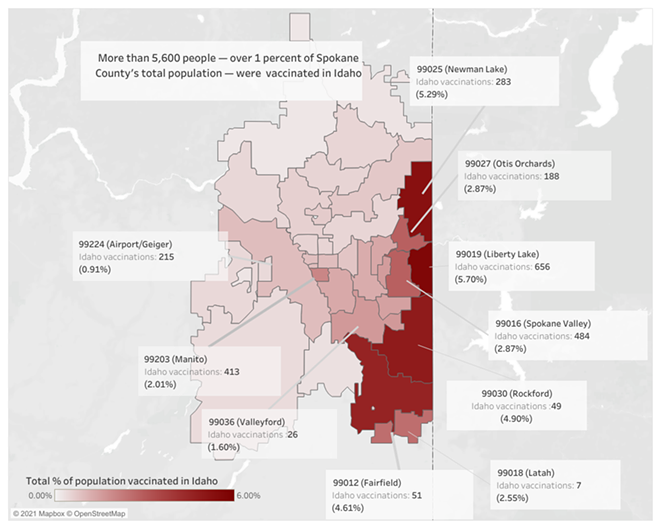 Daniel Walters
As of June 9, 5,680 from Spokane County were vaccinated in Idaho

And that's on top of the fact that state numbers don't count shots given by the Defense Department and the U.S. Department of Veterans Affairs. That's significant because Spokane County is home to Fairchild Air Force Base, where thousands more shots given out would not be counted in the state system. A Fairchild spokesman told the Inlander that he was not authorized to say how many vaccines had been administered at the base, citing security concerns raised by the Department of Defense. At least 8,600 people reside on the base.


"It does make a difference when we're talking about opening up the economy and getting us going," says Kelli Hawkins, a spokesperson for the Spokane Regional Health District.

While it may be tempting to simply add the Idaho and federal numbers to Washington numbers, the state health department says that may not give accurate numbers either. If a veteran, for example, sees a provider outside of the VA, and that provider documents the COVID-19 vaccine into the electronic system, then that veteran may be double-counted if the state simply added federal data to its system as well.

"DOH is committed to ensuring vaccination rates reported to the state's data dashboard are accurate and consistent," the state health department says in a statement. "The state will continue to work with the federal government on this matter and thanks the more than 3.9 million Washingtonians who have received at least one dose of the COVID-19 vaccine."

Gov. Jay Inslee has said that the state will fully reopen June 30, but it could happen earlier if 70 percent or more of Washingtonians older than 16 receive their first dose of a vaccine. Earlier this week, the White House announced that Washington reached the 70 percent threshold — but Inslee has said the state is not quite there yet. The federal numbers were based on adults 18 and older, not 16 and older. State numbers say only 64 percent of those 16 and over have initiated vaccination.

In order to get more people vaccinated, Inslee has announced incentives that include lottery cash prizes, tuition assistance and sports tickets. The incentives include Washington residents who have previously been vaccinated, and the state will use the Washington State Immunization Information System to identify those eligible. You can see if you're in the system by going to myirmobile.com. If nothing comes up, the state says that doesn't necessarily mean you're not in the state immunization information system, but you can call 833-VAX-HELP if you need help verifying your vaccination record.

The problem is, you're probably not in that system if you got your vaccine from the Veteran's Administration, the Department of Defense or a provider outside of Washington. In those cases, the state health department would only have a record of your vaccination if your provider shares that information with the state. Health officials recommend contacting your provider if you've been vaccinated so they can update information about your status. 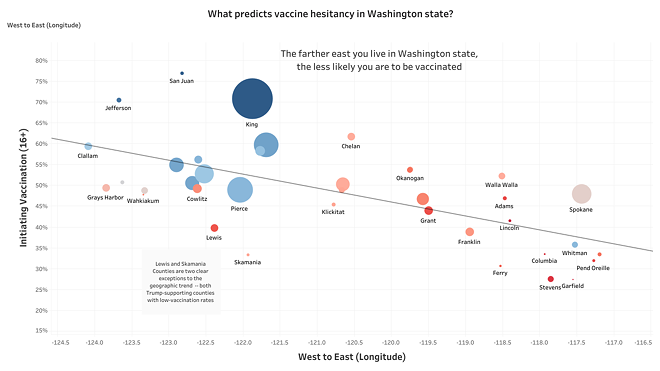 Daniel Walters
Vaccination rates by county as of May 25

"There is no systematic way to communicate immunization data between Washington and Idaho," says Niki Forbing-Orr, a spokesperson for the Idaho Department of Health and Welfare.

That's true of COVID-19 vaccinations, but also for other immunization shots. She says there would need to be a data-use agreement for the systems from each state to be able to share information.

Shelby Anderson, a spokesperson for the Washington Department of Health, says they are "working with" Idaho to determine the best way to share data.

"However, it will take some time," Anderson says.

Miller, meanwhile, says he was curious to know whether he'd be counted in Washington's system since he got his vaccine in Idaho. He's slightly disappointed to found out he's not.

"It frustrates me a little," Miller says. "But at the end of the day, I just want people to get vaccinated."