After more than a year in the making, Brick West Brewing Co. started pouring beer for the public earlier this month.

The brewery and taproom is the project of owners Matt Goodwin, a well-known local restaurateur (Backyard Public House, Fast Eddie's, Press, Remedy and others), and Jordan Tampien, co-founder of 4 Degrees Real Estate. It started when the duo, along with their brothers, acquired the vacant Watts Automotive Building on West First Avenue.

The all-ages taproom features 13 beers on tap, plus guest cider and kombucha, multiple TVs and a projector. Brick West is also leasing the adjacent plaza — built by the city last year above a sewer overflow tank — to use as its patio.

As far as food goes, a small kitchen serves gourmet hot dogs, which can be ordered from one of two tablet stations or an app on your phone. The menu includes premium choices like Sonnenberg's Italian sausage ($9) and even a Beyond Meat vegetarian sausage ($9). Each item has the option for add-ons such as cream cheese or a spicy housemade spread and comes with a bag of Tim's Cascade chips. When the new Watts 1903 Spirits and Eatery opens next door, sometime in the next month, Brick West will expand its menu to include various items from the neighboring restaurant. 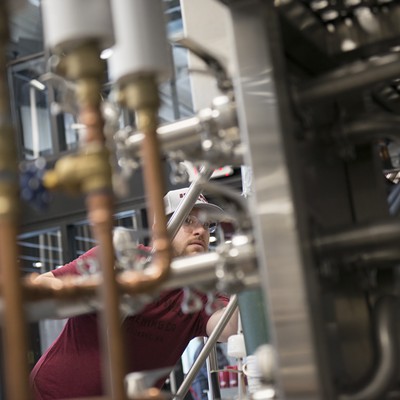 Like most brewers, Milne was first introduced to homebrewing as a hobby. When that hobby turned into a passion, it began his long road of a career.

He got his start at Pyramid Brewing in Seattle before moving to Bellingham, where he'd previously attended Western Washington University. There, he got a job with Kulshan Brewing as a keg washer and became head brewer five years later.

"I just worked my way up doing everything," Milne says. "From scrubbing the floors to packaging, there's not a job you could list that I haven't done."

Milne went on to earn the 2018 Glen Hay Falconer Foundation Brewing Scholarship, which sent him to two prestigious brewing schools: The Siebel Institute in Chicago and Doemens Academy in Munich. After graduating from the World Brewing Academy, he knew he next wanted to help build a brewery.

"I was really looking for a ground-up opportunity to come in and help some people start a brewery and kind of build it to how I want to brew my beers," he recalls.

Brick West was that exact opportunity. Milne was hired in December 2018 and was responsible for building the brewery. He planned it on paper for months before moving here with his family in April. During that time, he dreamt up ideas for the 15-barrel brewhouse like the silo on the roof that will eventually hold 40,000 pounds of grain for his base malt.

With his brewing background and training, it's no surprise he wants to focus on creating world-class German lagers, but Milne also wants to explore more contemporary styles. The taproom opened with various lagers on tap, like the My Town American-style lager (4.8 percent alcohol by volume), Lucky Penny copper lager (5.6 percent), pilsner (5.1 percent) and dunkel (5.3 percent).

Those brews are accompanied by a vast amount of other styles. If ales are more your speed, the Helping Hand hazy IPA (5.7 percent), Brick by Brick West Coast IPA (7.1 percent) and First Step nitro breakfast stout (5.5 percent) are some of the popular options available.

The next big hire by Goodwin and Tampien was Brian Carpenter as the taproom's general manager.

Brick West celebrates its grand opening on Saturday, Feb. 1, from 11 am-2 am, with games and giveaways. Compete in a rock, paper, scissors tournament, and enter a raffle to win prizes such as a beer tour and tasting with head brewer Sam Milne.

Carpenter has become a widely recognized face in the local beer scene over the last decade; many simply know him as "Fro." He got his start as a bartender and manager at the Flying Goat and helped open Republic Pi. Most recently, he was the sales director for One Tree Cider, but for several years before that, he was a sales representative at No-Li Brewhouse.

He's now running the Brick West taproom, and in charge of sales and distribution. With the doors finally open and all the preparation behind him, he says his priority is filling the taproom and making sure it's a place for everyone to hang out.

Starting next week, the taproom will host a weekly bingo night on Tuesdays. He's also starting to plan on ways to utilize the patio in the coming warmer months — think outdoor concerts and collaboration events with other local breweries.

Next up for Carpenter is launching distribution, which he says should happen around springtime. His goal is to spread the word about the brewery by putting beers on tap throughout Spokane. ♦