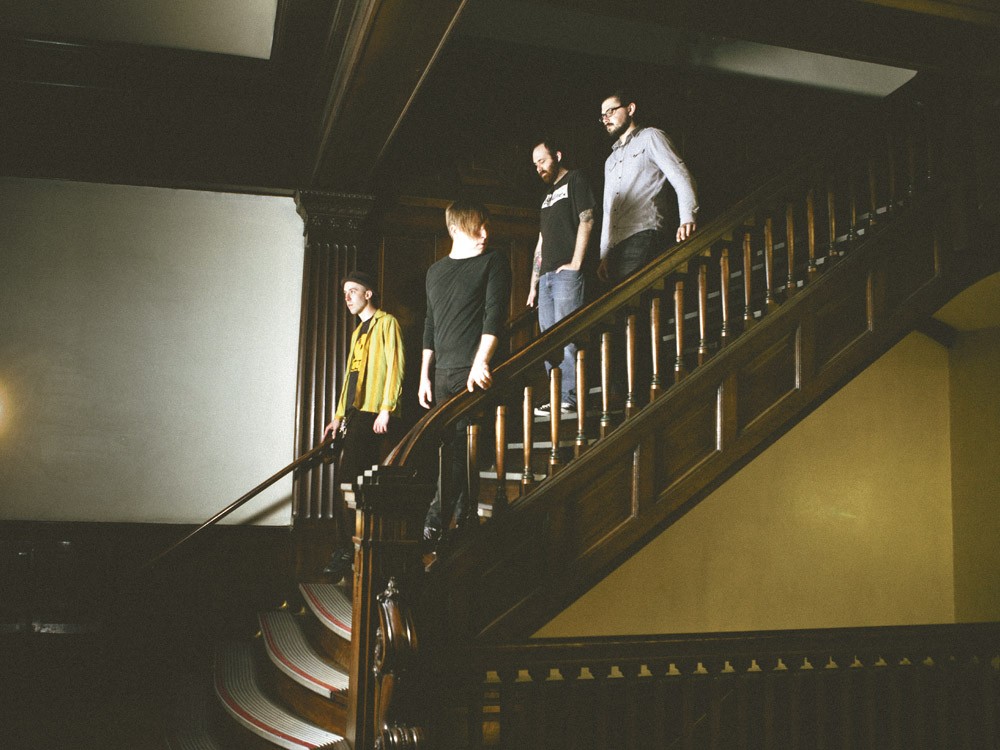 There are no edges here. There are no hard walls. Nothing should reflect sound, and yet sound seems to reflect.
The house Mirror Mirror practices in would have been the home of the future in 1954. The space is quintessentially modern: spare and simple and nearly symmetrical. You could almost fold it in half north to south.

The basement room the band practices in, on the other hand, would have been regarded as a masterpiece of Naugahyde excess in the 1970s. It is gaudy and largely padded and almost completely synthetic. The bar is clad in a puffy red vinyl. The walls are draped — floor to ceiling, end-to-end — in an orange-flecked crimson shag carpeting.

Joe Preston — the band’s drummer, newest member and lessee of the house — nailed up quilted packing blankets over the high-slung basement windows.

Everything in this room — the designed, the ad-hoc — works to drain the space of reverberation and echo. Mirror Mirror spends its nights filling it back up again.

When Alex Moe leans on his organ it lets out an insistent, blanketing drone. Joe Preston (husband of music editor Leah Sottile) follows with a spry drum rhythm, and when Kelly Fox (bass) and Jason Campbell (guitar, vocals) roll in quickly behind him, the room is draped in sheets of cascading sound.

The song, “Segments” is propulsive, insistent, like waves lapping the shore. Measure after measure is similar each to each. Similar, but not the same. Campbell’s voice sits somewhere in the foamy wash. Sometimes it bobs to the surface and sometimes it breeches high above the swell, but most of the time it floats in amidst the wash. “Just another instrument,” in his words.

The music builds the way the band has been built — layer by layer since 2008 — when Campbell, a Spokie living in Olympia, was inspired by “dirty photos of women from the ‘20s” to put together a band that was “dark and vague and sounded glam.” He wanted to write “romantic, moody songs with romantic, dark themes,” and he has, through an estimated 10 different band members and a move back to Spokane in February 2011.

Each member, each locale has left a mark on the band, Campbell says, each wave depositing a new layer he has tried to retain.

All the while, he says, he has tried to keep the band “sound[ing] like Mirror Mirror while somehow reflecting the people in the band.”

And, with this latest group, letting the people in the band reflect back upon Jason’s work.

That night in the practice space, on a shelf above an old MacBook, a stick of incense smokes the way the music moves, the way waves roll. Each new coil of smoke is similar to the last. Similar, but not the same.

That night in the practice space, the band wants to try something new and Campbell suggests “We Will Become,” a song he wrote a while ago, but that this incarnation has never played before. Campbell leads with a sexy, mournful guitar line and the band follows, pacing the song like a slow jam. Preston, eyes half-closed, smiling, nodding deeply into the downbeats, fills slack moments with a series of jaunty drum fills.

Campbell lifts the head of his guitar in celebration of a short, spry run of notes. He doesn’t smile much, but he does here. Other incarnations of the band have been good, he tells me later, but this lineup “just clicks for me.” They’ve somehow been able to go “darker and more focused” with the music while making the actual playing “more relaxed and free.”

The song descends into the chaos and laughter that accompanies a good jam. Moe and Preston remark about how good that sounded on the first pass.

“I wrote that like six years ago,” Campbell says, a little breathless. “I never tried to play it live though.”

“We should,” Kelly Fox says.