A whirlwind tour of the institutions that make Spokane tick 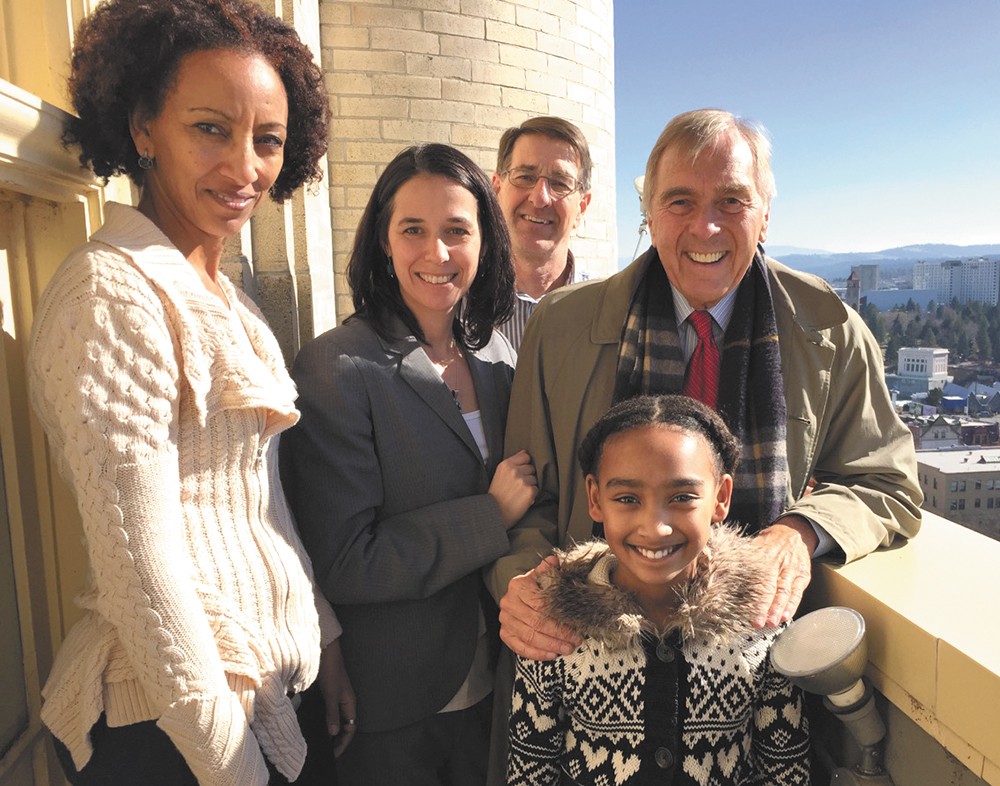 Hannah Agwunobi, then a poised and enthusiastic St. George's 4th-grader, was fastest on the draw with her Jeopardy-style clicker to emerge victorious as the 4th-grade winner of my George Nethercutt Foundation Citizenship Tournament for Eastern Washington. The competition tested students' civic knowledge and required them to complete up to 15 "citizenship tasks" to be eligible for scholarship money, prizes and educational travel. Now a thriving St. George's 5th-grader, Hannah, her mother Dr. Elizabeth Nega, Foundation Executive Director Ron Irwin and I spent a day last month learning more about Spokane's municipal government.

As guests of Spokane County Commissioner Shelly O'Quinn and County Engineer and Facilities Director Ron Oscarson, we walked the narrow, creaky steps to the top of the Spokane County Courthouse, where we experienced a unique tour and tutorial of Spokane's rich history, absorbing facts about early Spokane, learning of the preservation of Spokane's most prominent landmark and appreciating how vital county and city governments are to all citizens. Hannah proudly sat in the courtroom chair and historic jury box of Superior Court Judge Ray Clary, who explained his appointment to the court and discussed the difference between criminal and civil cases and the court's importance to all citizens who experience America's justice system.

At Spokane City Hall we were warmly hosted by Spokane Mayor David Condon, who explained city government and the stories behind some of his office memorabilia. Hannah saw the original flag of Spokane, signed in years past by President Richard Nixon, astronaut Buzz Aldrin and other prominent Spokane figures. A fire truck ride to Spokane's Upriver Drive Dam helped Hannah understand the vital role of first responders. A police car ride with longtime Officer Rex Olson took us to the City Engineer's office where traffic controls, street sign manufacture and bridge safety measures were explained.

Hannah represents the next generation

of Spokane's leaders. One day, after completing her education and fulfilling her desire to be an engineer, she will hopefully turn her life and interests to some form of public service. The Citizenship Tournament winners — 8th-grader Jasleen Bains and 12th-grader Joshua Ross, along with 552 of their peers who competed from 40 Eastern Washington schools — will enter adulthood armed with the civic knowledge necessary for all good leaders to effectively represent the public. Jasleen and a parent will learn about state government when we travel to Olympia; Joshua and his dad, and Spokane teachers, already saw the federal system firsthand during a trip to Washington, D.C., last June.

It's important for all citizens to understand America's story and be engaged with leaders, past and present. Hannah's exposure to the dedicated service of all those she met will surely affect her commitment to being a future leader. Spokane can be immensely proud of those who serve today and excited about the next generation of quality leaders. ♦