Being with bees: Gonzaga’s Hemmingson Center bees are preparing for summer 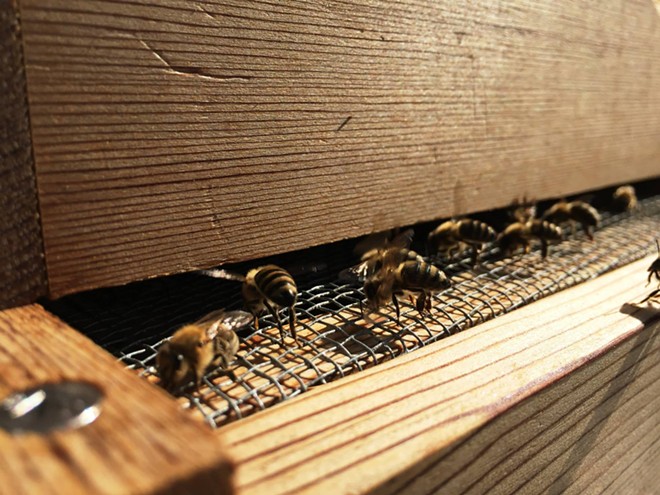 Elizabeth Higgins photo
Bees enter and exit the hive through the aperture by the ledge.

Thrumming their strangely small wings, bees float through the outdoor cafeteria area of Gonzaga’s Hemmingson Center. Although most cafeterias would be abuzz at the sight of bees, here students pay them little attention.

It’s understandable why she doesn’t. The bees are only interested in flying off the edge of the roof to gather pollen from nearby trees and flowers. Right now, they teem with activity, making the most of the warm sun.

“They are collecting water and whatever pollen they can get this time of year,” Faulkinberry says. “They have holsters in their thighs and that’s where they put the pollen.”

Except for the bright yellow and dark orange of their pollen-covered legs, the bees are a golden-brown color reminiscent of freshly baked buns. They’re hardly larger than a nickel. In an unrelenting procession, they walk in and out of the teal box containing their hive on the 2-inch wide ledge that stretches along one of the shorter sides. Sometimes returning bees land on the wall and climb downward on the ledge before they enter. 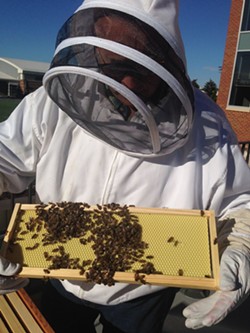 Elizabeth Higgins photo
A beekeeper holds a hive frame teeming with bees
At its loudest, the hive’s buzzing sounds like a weak electric fence. It’s just enough to make someone unfamiliar with bees nervous. Faulkinberry says the most difficult part of bringing bees on campus was “educating people that honeybees are really docile creatures. Everybody lumps bees and wasps and yellowjackets into one category. This is a different creature.”

Unlike wasps, which can deliver multiple painful stings without hesitation, honeybees die when they sting people.

“They really could care less about us,” Faulkinberry says. In the spring, bees need to “increase the numbers of their hives so they can produce as much honey as they can during the short Northwest summers,” he says. To do so, bees travel to plants that produce pollen and nectar, collect it and return to the hive. Although they are small, they can fly up to five miles in search of these ingredients.

The coolness of early spring this year did nothing to help the hives in this task. An orderly pile of toy-like dead bees beneath the hive’s entrance spreads wider than usual, and the live bees are sometimes clumsy with the cold. Every so often, one lands on the roof of the hive and tumbles off. “This year was a tough year, but there’s been a lot of tough years,” Faulkinberry says. “The bees have struggled for the past 20 years.”

According to the EPA, beekeepers suffered unusually high losses in 2006-07, and although bee populations have started to recover, the sudden disappearance of beehives still poses a concern. There are many theories as to why bee colonies suddenly die, including pesticides, disease, global warming and stress from travel or relocation. Even so, some reasons why bees are struggling remain a mystery.
click to enlarge 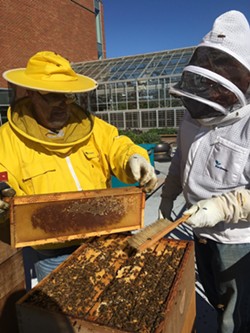 
Although the city of Spokane has already banned neonicotinoids, a chemical harmful to bees, there are still ways people can help bees flourish here.

“Don’t cut your dandelions, because those are the early sources of pollen for the bees. At least, don’t cut them until after they’ve flowered,” Faulkinberry says.

The nutrition bees receive early in the season sets up the hive for success during the rest of the year.

Although each hive contains as many as 10,000 bees in early spring, only a few bees enter and exit at a time as they bring back pollen. “As it warms up, there’ll just be a swarm of them around here,” Faulkinberry says. By the time fall arrives, the bees will make enough honey for the Hemmingson Center to gift small bottles to visitors.