In the middle of Washington, Quincy finds itself at the intersection of gangs, technology, farming and a population boom 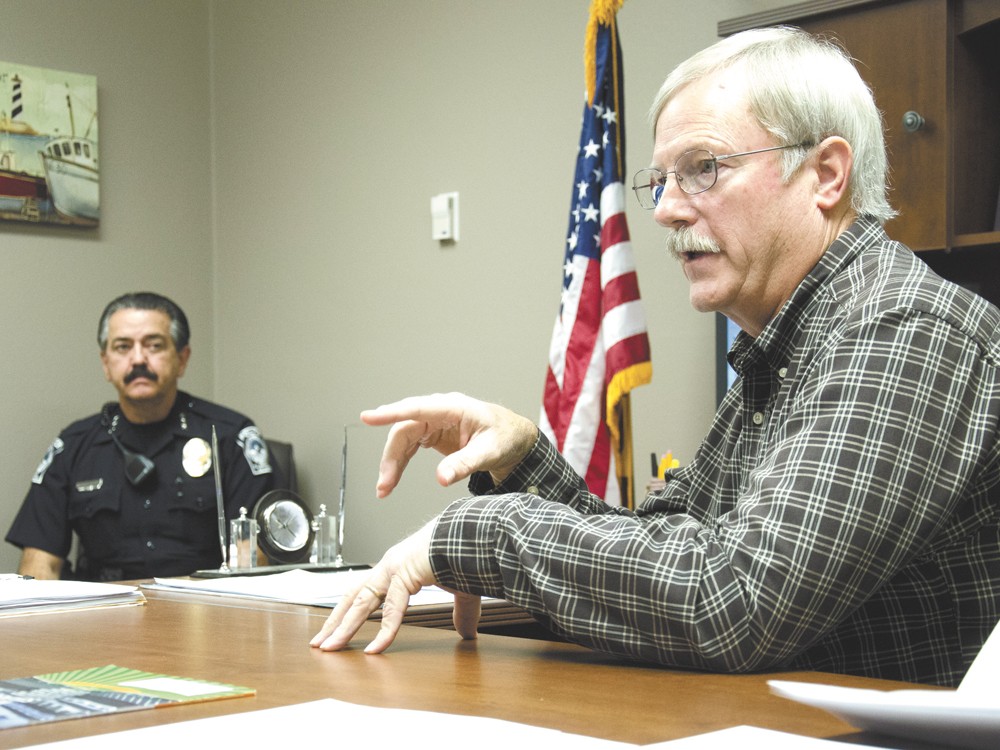 When a bullet sliced open her husband’s chest, Raquel Munoz’s first instinct was to hold his head up so he wouldn’t choke on his own blood.

“I went into trying-to-save-his-life mode,” she says. “It didn’t work.”

She told him she loved him and, in the middle of the street with her children a few feet away, held him until he was gone and family members pulled her away.

Police would later say 40-year-old Ramiro Munoz Jr. was targeted because he was involved in gang activity when he was young, and they eventually arrested the man they believe was responsible. But Ramiro’s death would spark something bigger in Quincy, a once sleepy town surrounded by a patchwork of farmland 140 miles west of Spokane.

“When people realized he was a good family man … they woke up,” Munoz says today from Akins Harvest Foods in Quincy, where she works as a manager and occasionally pauses conversation to tell a customer — sometimes in English, sometimes in Spanish — that someone will be right with them. “It took a good man, not a gang member, to get shot for them to open their eyes and see that we need to do something.”

Ramiro had been involved in gang activity as a young man, and police believe the man who shot him was a new member of a local gang out to prove himself. In the days after the September 2011 murder, Munoz organized marches in the park across the street from where she watched her husband die. About 400 people gathered with signs decrying gang violence, and Munoz has been working since to raise awareness and help start a new anti-gang program for schoolchildren. There hasn’t been another homicide in Quincy since.

Gang violence is just the latest in a battery of changes facing the small, Central Washington town. First known for wheat farming and then for potatoes and beans, Quincy is now home to massive packing plants that ship fruit and frozen vegetables across the country, billing itself as a place where “agriculture meets technology.” Large-scale agriculture has brought more migrant workers to town, while new development — mostly corporate data centers — has attracted national attention (most recently from the New York Times in September) and raised its tax base.

In response to Quincy’s changing identity, town officials are using that new money to update infrastructure and, most recently, for state-of-the-art crime-fighting technology.

On a visit last week, the town is quiet and blanketed by heavy clouds. In an old city building under a tall, beige water tower, Ackerman remembers the day Ramiro Munoz was killed. The shooter had fired off a “warning shot” about two minutes beforehand, Ackerman says, but nobody reported it. Today, that might have gone differently.

“Had we had ShotSpotter in place, we’d have been there before the second round was fired and that individual lost his life,” Ackerman says.

That’s because ShotSpotter, a new $130,000 system the town has put in place, uses software to determine when shots are fired and where they come from in order to get police to the scene in less than a minute, he says. The program is owned and run by a California-based company, and its services are essentially rented out to towns and cities across the country. Officials in Quincy say they’re the first in Washington to use the system.

Ackerman has a dark mustache framing his upper lip and a loud siren ringtone on a cell phone clicked to his belt. He spent more than 30 years as a cop in Los Angeles before coming to Quincy, and he doesn’t think the town has a worse time than most others its size, calling Quincy’s a “light to moderate gang problem.”

People are just too slow to report gunshots, he says. “We’ve added a tool in our toolbox, if you will, to keep Quincy a whole lot safer,” he says.

The changing face of Quincy means town officials are dealing with things they’ve never encountered before. It’s not just gang violence, but also connecting with a group of their constituents — the majority — who speak a different language and may be suspicious of authorities. In the 2010 Census, 74 percent of Quincy residents were Hispanics. That’s a steady climb from 65 percent in 2000 and 37 percent in 1990. Ackerman and his second-in-command, Capt. Gene Fretheim, both admit they’re still struggling to gain trust.

“We’re pushing very hard to develop a rapport with everyone in town, especially in the Hispanic community,” Ackerman says. “We’re not here to send them south of the border. If you’re a hard-working, law-abiding citizen, we don’t care what your ethnicity, nationality or legal status is in this country, we’ll take care of you.”

The department holds town hall meetings with the first hour in Spanish, and the city has school and recreation programs aimed at keeping kids away from the family-like attraction of a gang. Ackerman has hired a part-time “graffiti czar,” and the mayor says he’s pushing for legislation to increase sentencing for gang-related crimes.

The sign that welcomes visitors to Quincy promises “Opportunities Unlimited,” and despite the town’s struggles, people here seem determined to stand by that promise. In the last decade, the small town has seen a flood of new industry and cash, and that’s paid for a new library, new fire station and, in coming years, a new police station and city hall. Since 2007, five large tech companies, including Microsoft and Yahoo!, have built data centers in Quincy, attracted to the area’s freedom from natural disasters and cheap land and power. (The centers are warehouses of servers that store information and power services like e-mail.)

The development has boosted property values and tax revenue — it’s how the town paid for ShotSpotter — says Mayor Jim Hemberry, who’s lived here since 1978 and served on City Council before he got the top spot five years ago. He lists the ways the town has benefited from all the change it’s seen in recent years, but argues the gang problem is often blown out of proportion.

“I’m not one bit afraid to walk through this community at night, but I know there are people that are, and whether those fears are justified or not, we need to deal with them and make them feel safe,” he says, quickly correcting himself. “We need to make them safe.”

If Quincy has a downtown, the Grainery is at its heart. Even on a rainy November morning, light spills into the cafe from big windows lining its front wall. A fireplace sits in one corner and a Christmas tree in another, and the people sipping refill after refill look plenty at home. That’s the intention, say owners Harriet and David Weber. David spends the morning drinking black coffee with a group of friends, and Harriet serves up sandwiches from behind the counter during the lunch rush.

In recent years, the couple has seen older businesses replaced by Mexican restaurants and markets, but they don’t mind. David says he admires his neighbor who works in Quincy to send money back to his family in Mexico, and their business may not be alive without the town’s new industries. The Grainery’s finances have been shored up thanks to catering and boxed lunches Harriet makes for groups that come through town to tour the data centers.

A century ago, David’s family homesteaded here. Today, along with the restaurant, the Webers operate a family farm on a ridge at the southwest edge of town, where they grow wheat and vegetables. They say they’ve seen corporate farming squeeze out the small operations and data farms rise up from wheat fields. And they’ve sent their two sons off to college knowing neither has any intentions of continuing the family farming tradition.

“Quincy is not a particularly pretty place, but the thing about Quincy is the strength of the people,” Harriet says. “When you don’t have a lot of pretty things, it makes you work harder to make your town something.”

Raquel and Ramiro Munoz met in middle school and celebrated their two-year wedding anniversary just a month before he was killed. They were raising five children together. He used to tell her he loved her because she was strong and she didn’t give up.

She believes her efforts are helping stamp out gang activity in Quincy, but she’s fighting against the rest of the town’s tendency to get complacent.

“[Ramiro] was already wanting to change Quincy. He wanted to do something to make a difference,” she says. “He would [tell us] to just keep our heads up, to keep doing what we’re doing and not give up. He didn’t believe in quitters.”