The Spokane City Council votes down restrictions on bikini baristas; plus, a marketing ploy gone wrong 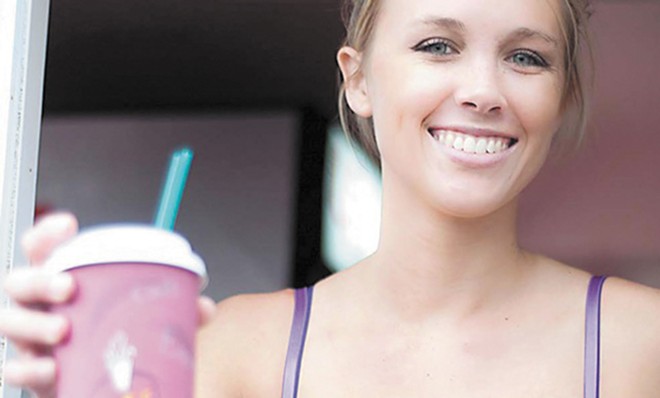 Another attempt to regulate BIKINI BARISTAS has fallen short. On Monday, Spokane City Council voted down an ordinance proposed by Councilman Mike Fagan that would require coffee stands featuring bikini baristas to post signage indicating to the public what kind of "uniforms" their employees might be wearing. The ordinance, said Fagan, wouldn't ban the offending stands but would require employees to be indoors and out of the public's view.

Fagan, who has long sought a way to rein in the city's bikini barista stands, said he's heard numerous complaints over the years about these businesses. He said he heard from one unsuspecting coffee drinker who who accidently got more than a cup when driving up to a stand, and from a school that's had to reroute buses and rearrange classrooms because of the proximity of one of them. He also noted that the ordinance was crafted in a way to withstand legal challenges.

However, the ordinance failed on a 4-1 vote (Councilmembers Amber Waldref and Mike Allen were absent) over concerns that it would invite a costly legal challenge. Councilmembers Candace Mumm and Jon Snyder also suggested that the issue could be better resolved through existing land use and adult-oriented business ordinances. (JAKE THOMAS)

Orangetheory Fitness dotted the area surrounding their new location with spray-painted bikes as a promotional stunt. Each one had a number on it, and the plan was to have new members take selfies with the bikes for a Facebook competition. The idea was based on a similar effort to promote Seattle's Orangetheory Fitness, says Richard Cote, whose wife owns the future Spokane location.

Ultimately, Cote decided to take the bikes down Monday afternoon after backlash on social media from cyclists, who thought the orange bikes were part of the ghost bike movement or a distasteful mocking of it. Ghost bikes, usually spray-painted white, are placed in areas where a cyclist was killed or injured by a car. The movement has spread to more than 210 locations worldwide.

Phil Larkin, a local bike commuter, says he was especially concerned by the bike at Southeast and 29th, which had a baby seat on the back. Cote was apologetic, saying he wasn't aware of ghost-bike memorials and didn't mean to offend anyone. (MITCH RYALS)

Spokane police boarded up a CHRONIC DRUG NUISANCE home in the Shadle Park area Monday and announced the end of two years of drug trafficking and violence at the property to a relieved group of neighbors. Police have been out to the property 62 times in the last three years, responding to drug overdoses, assaults and reports of stolen vehicles. After accumulating three legal violations within 60 days, the city can move to take over a property and kick out the occupants through a process called abatement. As they moved to do so with this property, the homeowner, 66-year-old York Hoskins, agreed to voluntary abatement without a court order. Hoskins, a Vietnam war veteran, will have to move elsewhere for a year and will then be allowed to return to the home.

"We've done two [abatements] this year.We average about four a year," says SPD Lt. Allen Arnzen. Kicking someone out of their home isn't the ideal solution, Arnzen says. He prefers to connect people with resources and work with them to resolve problems with neighbors. In this case, that wasn't enough. "You can lead a horse to water but you can't make it drink," says Arnzen. (LAEL HENTERLY)