Boeing pledges $100 million to those affected by 737 Max crashes 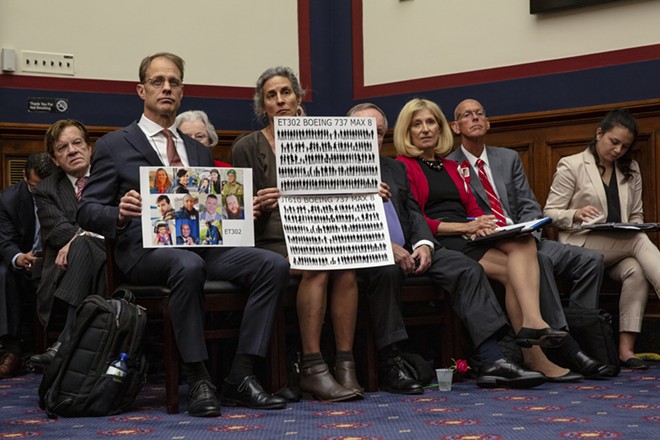 Amr Alfiky/The New York Times
Families of victims of Boeing flight crashes hold names and photos of their dead family members during a Aviation subcommittee hearing of the House Transportation and Infrastructure Committee about the status Boeing 737 MAX airplane, on Capitol Hill in Washington, May 15, 2019. Boeing said on July 3 that it would allocate $100 million to help the families and communities affected by the recent crashes of two of its 737 Max jets.
By David Gelles
New York Times News Service

Boeing said Wednesday it would allocate $100 million to help the families and communities affected by the recent crashes of two of its 737 Max jets.

The move was among the most overt acknowledgment of Boeing’s responsibility in the crashes, which were caused in part by a malfunctioning anti-stall system on the new jets. It will also add to the company’s mounting costs as it faces lawsuits from victims’ families, investigations by federal authorities and calls for compensation from airlines.

“We at Boeing are sorry for the tragic loss of lives in both of these accidents, and these lives lost will continue to weigh heavily on our hearts and on our minds for years to come,” the chief executive of Boeing, Dennis A. Muilenburg, said. “The families and loved ones of those on board have our deepest sympathies, and we hope this initial outreach can help bring them comfort.”

The families of some victims of the crashes have filed numerous lawsuits against the company and are requesting millions of dollars in damages.

Some families of the victims of Lion Air Flight 610, which crashed after taking off from Indonesia in October, were pressured to sign settlement agreements that barred them from suing Lion Air or Boeing.

Boeing said the $100 million investment would be made over multiple years and that its employees would be able to contribute funds as well, which the company would match through this year.

The money will be used to “support education, hardship and living expenses for impacted families, community programs, and economic development in impacted communities,” the company said. Boeing said it would work with local governments and nonprofit organizations to distribute the funds.

The Max remains grounded four months after the crash in Ethiopia. Boeing is working to develop a software update and gain approval from aviation regulators but has faced numerous delays. Last week, the timetable was pushed back yet again after the Federal Aviation Administration discovered a new problem with Boeing’s emergency procedures.

The delays have caused the three carriers in the United States that fly the Max — American Airlines, United Airlines and Southwest Airlines — to cancel flights into September and October. The airlines have already canceled thousands of flights and incurred significant costs related to storing and maintaining their grounded jets. They are expecting compensation from Boeing.