I repurposed my first cardboard box the weekend it snowed. We weren’t isolating in earnest yet. My husband planned to start working remotely that coming Monday. I was waiting to hear about the state of my own office, and about our daughter’s preschool. 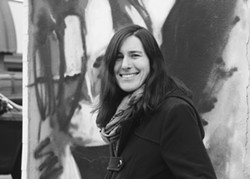 The Sunday with the snow, we took our last family shopping trip. Our daughter is three, and we wanted to move her from her toddler bed to a twin. The store said they would call us when it was ready to be delivered. Our daughter didn’t understand why she couldn’t just take her new bed home. To console her, I said she could get sheets and a blanket, any kind she wanted.

Back home, online, she picked a Paw Patrol comforter and two sheet sets. I didn’t feel like going outside again after that. I looked for an activity to entertain the kid and found a blog with instructions for a ball ramp. Take a cardboard box, open it, tape it to a broom handle, fold the end of the box into a ski-jump shape. I followed the directions, then arranged bowls of varying sizes below the ramp, and called it skee-ball. It was an instant hit. She spent the rest of the evening launching balls off the ramp, trying to get them into the bowls.

The next week, my daughter’s sheets and blanket arrived, but her bed did not. The furniture store announced its temporary closure, all pending deliveries would have to wait. The blanket came in a big box, the sheets in two little ones. I thought I might replicate my skee-ball success with a different toy. A car luge was what I envisioned. I took apart one little box and made a new ramp, this time a narrower one with the sides folded up. I attached this with painter’s tape to the larger box so it sat at a nice angle and cars could be easily lined up on top, ready to luge. Unfortunately, interest from my daughter was short-lived. I blamed this more on her mood than my engineering skills.

I demonstrated the car luge to the only person to visit our house that week — a friend whose apartment shower wasn’t working. Could she use ours, she texted? She added if we didn’t want her to come over, she understood. I replied that she was always welcome; that we consider her family. This is how we are deciding who comes in and who stays out. The designation of family, expanded or contracted as need be.

My mother is also allowed to come over, but chooses not to. She’ll only see us outdoors. One morning, we met to watch my daughter ride her bike at the newly abandoned community college campus, maintaining a respectable space between us as we walked. But afterward, while I was putting her bike and helmet in the trunk, my mom leaned into the back seat to talk to my daughter, who was already in her car seat. She didn’t kiss her, but she might as well have. It is very difficult to distance oneself from a three-year-old.

My friend who is now called family said she liked the car luge, but wondered what else it could do. She picked out other toys to send down — a pony and a boat. My daughter stopped her. “That’s only for cars,” she said. But then she didn’t want to send the cars down it either.

Next, I took the other small sheets box and cut it into a wide strip. I poked holes at varying distances. A sewing board. I thought she could thread shoelaces and pipe cleaners. It would be a nice fine motor skills activity. No participation from the child. “You can do it, Mom,” she said, handing the board back to me.

New boxes arrived shortly thereafter. They were from my mother-in-law, who was apparently intent on creating the world’s most elaborate Easter basket for her grandchild. “I think she’s just trying to keep herself busy,” my husband explained.

These boxes were square-ish. I cut four holes in each, then taped one on top of the other, with the ramp from the car luge attached just below the bottom-most hole. A ball tossed into any of the holes will rattle its way through the boxes and roll down the ramp. I assembled this one night on the living room floor, my construction materials spread out around me.

As I worked, my daughter appeared in the doorframe of her bedroom, just standing there the way little kids who are supposed to be in bed do. My husband went to tuck her back in. I heard her ask, “What’s Mommy doing with those boxes?”

“She’s making something for you to play with in the morning.”

“Is it a Spring Break Surprise?”

But it’s hard to prevent even this benign euphemism from taking on a sinister tone. She knows something strange is going on. “Sometimes people don’t like to get too close to other people when it’s Spring Break,” is a sentence I’ve found myself saying. While playing a game called Rescue Princess, my daughter announced, “I will use my super powers to stop Spring Break!” I wish somebody really would.

The toss-a-ball chute still isn’t as beloved as the skee-ball ramp, but it has gotten a fair amount of attention over the last week, which I count as a parenting win. After that, I shifted my focus to a slightly different medium: cardboard tubes. I saved them from rolls of paper towels and toilet paper. Once I had a dozen, I taped them to the wall in a pyramid arrangement. A pom-pom ball dropped through the singular top tube is presented with several paths. Which tube it will ultimately exit from at the bottom is a mystery. This is my favorite of the cardboard contraptions. I pop a ball into it each time I walk by.

At night, after our daughter is asleep and all the balls and cars and pipe cleaners and shoelaces and ponies and boats have been put away, my husband and I remind ourselves of things. For now, we are healthy. We are together. We have what we need. Our parents are okay. Our friends are okay too. This isn’t a bad way to live, just different. We are adjusting. We are doing okay.

Still, worry presses in on us.

But I have something for that. It helps a little. Here’s what you will need: scissors, painter’s tape, cardboard box.  ♦

Leyna Krow is the author of the short story collection I'm Fine, But You Appear To Be Sinking. She lives in Spokane with her husband and daughter.