The cult series Twin Peaks makes a much-anticipated return, 27 years after it changed the way we look at TV 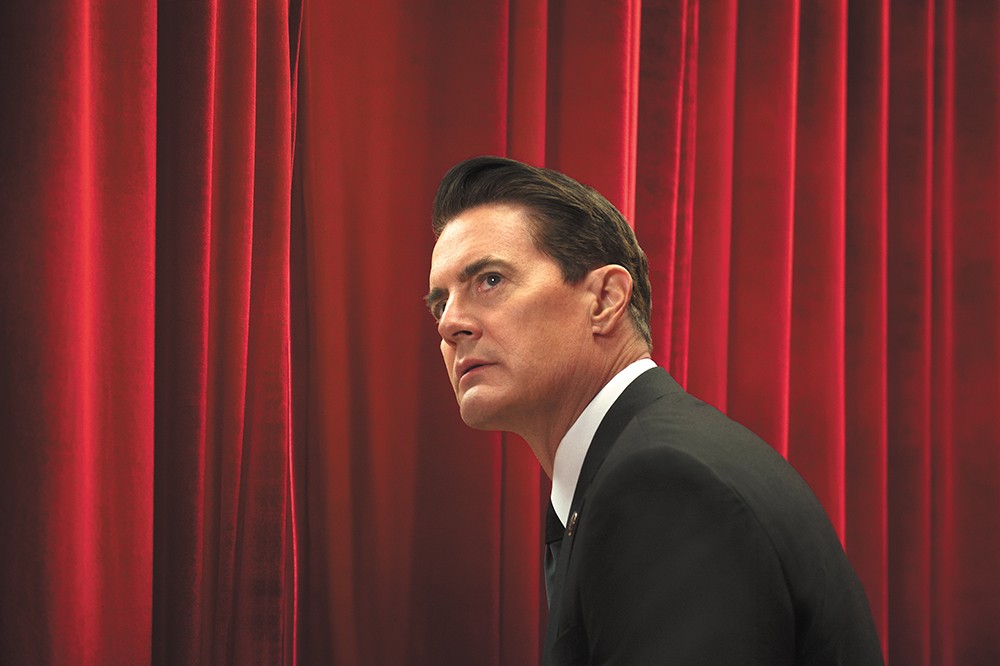 Laura Palmer's body is found one morning on the bank of a river,

wrapped in a plastic sheet.

It's perhaps the most iconic image in all of Twin Peaks, the short-lived cult series created by filmmaker David Lynch and TV veteran Mark Frost: The academic all-star and homecoming queen, face frozen like porcelain, hair matted with clumps of sand, lips blue. She looks like a completely different person than the one we see beaming from behind the closing credits of nearly every episode.

The people of Twin Peaks, Washington, a sleepy logging town 5 miles south of the Canadian border, are shocked by Laura's murder. Her friends and boyfriend are stunned into silence. The police officer delivering the news over the high school intercom breaks down in tears. At the funeral, Laura's father leaps onto the coffin as it's being lowered into the ground.

Enter FBI agent Dale Cooper, played with an almost boyish enthusiasm by Yakima native Kyle MacLachlan. Although his Tibetan-inspired investigative methods are unorthodox, Cooper is able to follow the cryptic clues of the town's strangest residents ("The owls are not what they seem," for instance) to successfully uncover a hotbed of marital infidelity, evil doppelgängers, demonic possessions and alternate dimensions.

Twin Peaks was a lot of things at once — a small-town soap opera, a police procedural, a dark domestic comedy, a disorienting supernatural thriller — but it was predicated on a single, powerful question: Who killed Laura Palmer?

That was the mystery that initially drew in audiences. It would also eventually be the show's undoing.

He was born in Missoula, Montana, in 1946, the eldest of three children. His mother was an English tutor and his father was a USDA research scientist, a job that sent the family ping-ponging around the country when Lynch was a child. That's how they ended up in Sandpoint and then in Spokane, and although Lynch only lived here for a short while in the early '50s (the family later moved to Boise, and then to Virginia, where Lynch attended high school), that time clearly made an impact on him.

Consider his 1986 film Blue Velvet, which follows a formula that he'd expand upon in Twin Peaks. It's set in a small (fictional) town called Lumberton, an eerily cheery suburb of white picket fences, perfectly manicured lawns and American flags. But that wholesomeness is merely a disguise for the decay and perversion lurking beneath its surface, and Blue Velvet soon descends, much like Twin Peaks, into a surreal nightmare world.

"This is the way America is to me," the director explains in Chris Rodley's invaluable book Lynch on Lynch. "There's a very innocent, naive quality to life, and there's a horror and a sickness as well. ... Blue Velvet is a very American movie. The look of it was inspired by my childhood in Spokane, Washington."

Lynch said as much to the Chicago Tribune when Blue Velvet came out: "Lumberton is a little like Spokane. It was in Spokane that I became interested in things other than insects and the textures inside trees. It was there that the question of what's inside the mind of a girl with red high-heeled shoes made me crazy."

That girl in red shoes, whether she really existed or is merely symbolic of something intangible, has, in a weird way, manifested herself in all of Lynch's film and television work. You could argue, then, that Lynch is an honorary Spokane filmmaker: Because so many elements of his art, from the doo-wop music to the clothing and hairstyles to the gee-whiz dialogue, are inextricably linked to the cultural iconography of the era when he lived here, one gets the sense that Lynch has been forever stuck in Spokane during the waning years of the Truman administration.

Blue Velvet contains another morbid glimpse into Lynch's childhood. There's a scene in which actress Isabella Rossellini, playing an abused nightclub singer, stumbles naked through a suburban neighborhood, as people gather on their lawns to gawk. It's one of the most infamous moments in a film that's lousy with them; the critic Roger Ebert was so disturbed and sickened by it that, in his one-star review of the film, he accused Lynch of degrading and abusing the actress.

And yet that image of Rossellini was apparently yanked right out of Lynch's own memory. He would later describe it in an interview with Ebert: "When I was little, my brother and I were outdoors late one night, and we saw a naked woman come walking down the street toward us in a dazed state, crying. I have never forgotten that moment."

Did that incident, which obviously haunted Lynch, happen in Spokane, and is it the reason he regards the city with such a morbid fascination? Lynch hasn't said as much, but Spokane certainly rubbed off on Lynch in a way that makes it inseparable from his work.

Spokane has never quite gotten over him.

Ask enough locals at your favorite watering hole, and you'll eventually get one of them to tell you that Lynch once drank Pabst Blue Ribbon on this very stool. I've heard many times over that the Swamp, the dearly departed tavern on the outskirts of Browne's Addition, was once a favorite hangout of Lynch's, a bit of local lore that even I have dispensed to disbelieving friends over beers. Some stories I've been told maintain that Lynch based several Blue Velvet characters on Swamp regulars.

The "David Lynch Drank Here" distinction has also been bestowed upon the pint-sized Baby Bar, and the Stranger further propagated the assertion in its recent piece about "Spokane's remarkable literary landmarks."

These claims have naturally weaved their way into Spokane's cultural DNA, even though evidence of Lynch having ever stepped foot inside either place is, as far as I can tell, totally circumstantial. I'd like to think it's true, but it could just as easily be the kind of made-up factoid that develops through an elaborate game of Drunken Telephone. (Somebody prove me wrong.)

But whether or not Lynch has ever slumped over the Baby Bar's counter, his presence still haunts the place. Walking into it is a bit like entering one of Lynch's most famous creations — Twin Peaks' Red Room, a purgatory-like dimension where Dale Cooper has a run-in with Laura Palmer's ghost.

About four years ago, local artist Dan Anderson first decorated the small, windowless room with Lynchian flair. A cluster of branches was arranged around the entrance. A black-and-white chevron pattern was stenciled on the floor. A silver mannequin posed in the corner, and an expressionistic painting of Laura Palmer's father Leland adorned the bar's far wall. Crimson curtains were hung everywhere.

The mannequin is gone now, and the paint on the floor has long been scuffed off. But the curtains are still hung, and one branch still juts out above the jukebox. Perched on it are a couple of stuffed owls, and next to them is an alien holding an owl mask.

The owls, it appears, are not what they seem.

that it was (however briefly) a mainstream cultural phenomenon.

What's even crazier is that it aired on ABC, a network that, despite experimenting with dramas like thirtysomething and China Beach, was then mostly known for its squeaky-clean sitcoms. The pilot of Twin Peaks aired on April 8, 1990, and drew more than 34 million viewers, which is (to put that statistic into a modern perspective) the same number of people who tuned in for last year's Oscar telecast.

The conceit of exploring a single mystery over the course of a lengthy series wasn't new when Lynch and Frost did it (consider The Fugitive, which Twin Peaks references in the form of a one-armed man), but they were among the first artists to successfully bring cinematic flair and deliberate abstraction to the small screen. The show's narrative and stylistic influence on other series — The X-Files, Lost, True Detective, The Killing, Hannibal — has been catalogued many times over, though few showrunners have ever quite pulled off the tricky blend of dreaminess, paranormal horror and bizarre humor that defines Twin Peaks' first 16 episodes.

When they conceived of Twin Peaks, Frost and Lynch's goal was to withhold the identity of Laura Palmer's murderer for as long as possible. The idea was to have the investigation gradually fade into the background, while the town's quirky tertiary characters elbowed their way to the forefront. ABC executives weren't happy with that: How could you set up a mystery and then refuse to pay it off?

Laura's killer is revealed a third of the way through the second season, which is also (not coincidentally) when the general quality of the show plummets. Lynch, having become disillusioned by the network's interference, reportedly distanced himself from the series (though he still appears occasionally as Cooper's nearly deaf supervisor Gordon Cole), and a rotating roster of directors, including Diane Keaton and James Foley, took over.

Like Days of Our Lives on speed, the second season of Twin Peaks really goes into subplot overload, and many of those storylines are woefully misguided.

Lucy, the police station secretary, is unsure who fathered her unborn baby. Nadine, the eyepatch-sporting wife of the town's sole gas station attendant, awakes from a coma both believing she's a teenager and possessing inexplicable super strength; this inspires sequences in which she tries out for the high school cheerleading squad. David Duchovny pops up as Cooper's former partner, now a woman. A love interest for Cooper, played by Heather Graham, is also introduced. There's a beauty competition, some shady real estate deals and a millionaire who's convinced he's a reincarnated Civil War general.

And it all feels so forced. The later episodes don't possess the genuine weirdness that the earlier ones do; it's too much of a put-on, like a kid playing dress-up in adult clothes. The series finale, directed by Lynch, represents a descent back into full-on serialism, deliberately ending the show with even more questions that it would presumably never answer. (A 1992 feature spin-off, titled Fire Walk with Me, further obfuscated the series' mythology.)

Twin Peaks was effectively canceled in June 1991, but its status as an occasionally brilliant, oft-mistreated auteur project has never faded. Had Twin Peaks premiered today, either on a premium cable network or through a streaming service, would Lynch and Frost's vision have played out as they had planned? Would they have been able to deliver a show that sustained its greatness through to the end? Or was it always destined to be a cult item that would entrance as many people as it would alienate?

TV content is more vibrant and visionary than ever, and on Sunday night (9 pm on Showtime), Twin Peaks returns to a fertile television landscape that it no doubt influenced. Lynch has been tight-lipped about the mysteries contained within the 18 new episodes, but if they're anything like the show at its best, those mysteries will never really be solved.

And maybe that's how it should be. ♦

Nathan Weinbender is the film and music editor for the Inlander. He previously wrote entertainment and culture stories for the Spokesman-Review and is a co-host of the weekly Spokane Public Radio show Movies 101. He's been a David Lynch fan ever since renting Mulholland Dr. from Blockbuster and watching it three times in a single day. Reach him at nathanw@inlander.com or 509-325-0634, ext. 250.