PICTURE THE NEW MOON
East Sprague is looking pretty spiffy with newly paved roads, upgraded sidewalks and refreshed landscaping, but those aren't the only visual improvements. New Moon Art Gallery is sporting a new exterior mural. Designed and executed by local artist Mallory Battista, the mural features a female figure with arms outstretched facing away from the viewer toward — appropriately — a new moon. At her feet are moonflowers, whose white blossoms open only at night in real life. It's meant to symbolize new beginnings and blooming in dark times, says Battista, who approached New Moon's Michele Mokrey about doing a mural after Battista exhibited at the gallery this summer. Visit facebook.com/newmoonspokane or check out the mural in person at 1326 E. Sprague Ave. (CARRIE SCOZZARO) 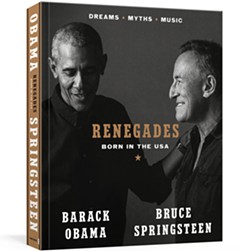 RENEGADES UNITED
Last spring, a Black guy and a White guy created a podcast called Renegades: Born in the USA. Both gifted storytellers — one a public servant, the other a musician — the men conversed widely, candidly, about race and more, and with much laughter, music and historical clips for context. The podcast morphed into a new book by the same name, bursting with photos and commentary. Written by former President Barack Obama and rock legend Bruce Springsteen, neither podcast nor book will be universally embraced, but the duo conveys hope that America is still big and strong enough to handle disagreement, even as Renegades challenges us to focus on what unites — versus divides. (CARRIE SCOZZARO)

COMFORT COMEDY
Don't take that headline to mean Jackie Kashian's standup comedy lacks teeth. The comfort I find in the longtime comic's material is in her Midwestern bullshit detector that reveals the hilarious absurdity in situations that too many of us just take for granted as innocuous or harmless. Her new special Stay-Kashian was honed over dozens of online Zoom "shows" through the pandemic, and skewers sexism and stupidity while also finding universal laughs in her Armenian family and love of all things nerdy. Give this special a spin while it's streaming free on YouTube, and better yet, check Kashian out on her next swing through Spokane Comedy Club. (DAN NAILEN) ♦