For a hard-liner like Jeff Sessions, it might be "too little, too late" to stop America's cannabis revolution 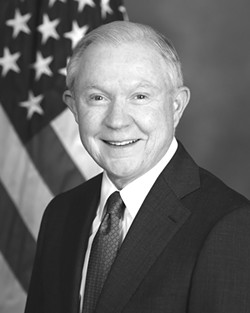 With the potential addition of four more recreational states

(Arizona, Michigan, Ohio and South Dakota) in 2018, the pathway to federal cannabis legalization is at a point that would have been inconceivable a decade ago. And the past four years of recreational sales have allowed Washington state cannabis users to live in a completely different America.

The Washington Post's Wonkblog found that "more people were arrested last year for marijuana possession than for all crimes the FBI classifies as violent," and one in every 20 arrests is a possession charge. And U.S. Attorney General Jeff Sessions has already reintroduced mandatory minimums for drug charges, as well as alluding to a crackdown on marijuana laws.

"When you talk to the police chiefs, consistently they say much of the addiction starts with marijuana," Sessions told the Heritage Foundation on Oct. 26. "It's not a harmless drug."

Sessions insists that the 1980s gateway theory is the correct viewpoint to take moving forward with states that voted for legalized weed, states he views as "lackadaisical." Sessions' comments come on the heels of Northeastern states beginning to take a long look at their marijuana policies; next year, Massachusetts begins recreational sales and Maine extends its allowance of legal possession to 2.5 ounces.

In June, Rhode Island created a special commission to examine the potential effects of legalization. State Sen. Joshua Miller sponsored legalization legislation, concerned that the Ocean State would miss out on major tax revenue if it's the last to legalize in the region.

The capitalist appeal of marijuana seems to be the most persuasive for many lawmakers and backers. According to the Associated Press, California's marijuana industry has a projected value of $7 billion, with state and local governments receiving a whopping $1 billion in tax revenue next year. And once residents of the New England area get their hands on cheap, legal pot, it's going to be hard to maintain the stigma of cannabis in yet another region.

So with less cultural hesitance and more incentive for major financial investors to grow consumer bases, it will be hard for regressive policies like Nancy Reagan's "Just Say No" to win out. And with the primary appeal of capital will come the benefits of finally performing medical research that has been impossible, due to the plant's classification as a Schedule I drug.

Cannabis legalization has become an interesting outlier to the long-held "states' rights" beliefs held by many members of the Republican Party for more than three decades. If states are the individual laboratories of the federalist experiment, it's difficult to see how the growth of recreational weed has proven anything other than monetary success, while offering the possibility of major criminal justice reform. ♦