It's fitting that, for this issue of Health & Home, RÜT restaurant chef Josh Lorenzen chose a root vegetable: the parsnip.

A relative of the carrot, yet paler, sweeter and nuttier, the parsnip often gets overlooked or underutilized in the kitchen, says Lorenzen, who partnered with owner Justin Oliveri to open RÜT on Spokane's South Hill in the spring of 2019. "People always made parsnip puree and it reminded me of baby food," says Lorenzen, who wants to elevate parsnips to the same level of fine dining gravitas with which he approaches all the plant-based ingredients on the restaurant's menu.

RÜT is a vegan gastropub and a rising star — as a newcomer, the restaurant garnered top honors in the vegetarian dining category in the Inlander's 2020 Best of Readers Poll: "Even meat eaters found plenty to love on a menu that explodes with flavors from Asia, Mexico, even Germany. Their bratwurst bowl is amazing," wrote Inlander arts editor Dan Nailen in the issue. "Cauliflower is turned into buffalo wings and a spicy kung pao bowl, and their crispy Brussels sprouts are some of the best around."

All of that just serves as evidence that plant-based eating is increasingly mainstream. Home cooks are working toward "meatless Mondays" and plant-based options now appear on menus in restaurants ranging from fast food joints to upscale eateries. In fact, according to a 2020 survey by the Good Food Institute, more than half of all fast-food chains now offer a plant-based option.

It's progress, but Lorenzen still feels "gourmet style" plant-based foods are sadly lacking at the grocery store level. "The focus is on meat and cheese substitutes, which is great," he says, "but many of the meals seem bland, underseasoned, just not creative to the level I want to bring."

In addition to exploring how he might get more involved in the packaged meal industry, Lorenzen has continued working in music — previously he was a member of the Portland-based band Acoustic Minds. Now he's enjoying the therapeutic benefits of helping others realize their creative musical dreams.

"I can still get the fun of being creative and collaborative with other people and not have it be my only job," says Lorenzen, who admits he's not very comfortable being in the spotlight anyway.

Kind of like the parsnip: a humble vegetable. But in the hands of creatives like Lorenzen, a potential rockstar. 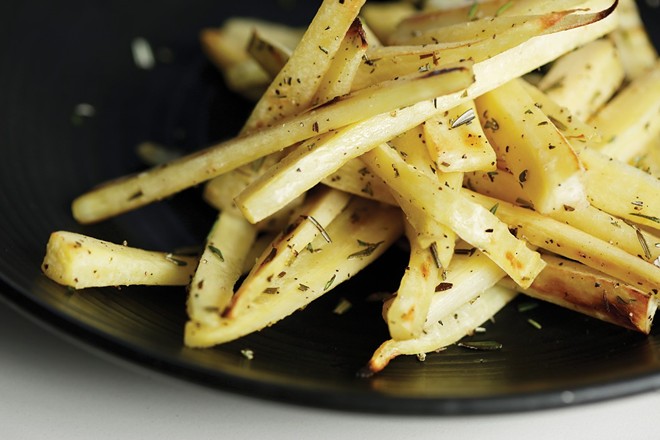 Kids — and adults — will love RÜT chef Josh Lorenzen's healthy alternative to potato fries. You can also make this recipe with carrots.

Parsnips are high in fiber and provide more than 20 percent of the recommended daily allowance of vitamins C and K, as well as folate. Like many vegetables, they're also high in antioxidants, especially ascorbic acid.

But how do they taste? Sweet, earthy and a little nutty, according to celebrity chef Jamie Oliver, who incorporates them into fall and winter holidays menus. Try them roasted, boiled and mashed, fried, steamed, cooked down into soups and stews, and even eaten raw.

Stored in the refrigerator unwashed, parsnips will keep just under two weeks and because they're a hardy root vegetable, they freeze and reheat well.

Although they're typically enjoyed in the fall, if left in the ground to overwinter, spring parsnips are delightfully sweet and a welcome first veg of the new year.