The biggest, most successful cult band in the world lives. DEPECHE MODE, the godfathers of synth-pop who were largely responsible for making doom-and-gloom danceable, industrial accessible and S & amp;M fantasies palatable to teen middle America are touring once again, this time in support of their 2001 release, Exciter. They play the Gorge on Sunday.


Rising out of the British new romantic movement of the late '70s, Depeche Mode quickly distanced and distinguished itself by jettisoning all acoustic instruments in favor of synthesizers. The move drew the ire of music critics on both sides of the Atlantic, who dismissed the band as lightweight, robotic and anti-rock.


But in the angst-ridden suburban neighborhoods around the world, the kids were tuning in. The infection had begun.


Originally comprised of keyboardists Martin Gore, Andrew Fletcher, Vince Clarke (also the principle songwriter) and vocalist Dave Gahan, the original tone of Depeche Mode was, in contrast to their later developments, almost breezy. Their first album, 1981's Speak and Spell, ushered in the electro-pop era with hits "Just Can't Get Enough," "New Life" and "Dreaming of Me."


With the exit of Clarke (to form Yazoo with singer Alison Moyet), Gore settled ably into the role of songwriter, and the band continued without so much as a glitch releasing A Broken Frame in 1982 and Construction Time Again (with the addition of keyboardist, Alan Wilder) in 1983.


Over the course of these two albums, a subtle change in focus could be detected. On Construction Time Again, in particular, Gore's previously suppressed sexual anxieties and professional frustrations came creeping slowly to the fore, steering the band away from simple pop territory and on to something considerably darker and more challenging. On their next outing, 1984's Some Great Reward, these ideas became fully realized. Featuring such DM classics as "Blasphemous Rumours," "Master and Servant" and "People Are People," the album also sported a harsher, more mechanized, industrial sound. It proved to be the group's commercial breakthrough and secured them hordes of new fans in America.


Riding the crest of international success, Depeche Mode apparently felt compelled to drag its newly garnered minions into the murky depths of despair in 1986 with the appropriately titled, dirge-ridden Black Celebration. Here, every morose tendency Gore ever harbored is indulged as the band wallows in melancholia and degradation until the question is forced upon you: "How much more black can it be?" The answer of course is (as Nigel Tufnel would say) "None. None more black." The ironically titled Music for the Masses brought the '80s to a close with a chill and a whimper.


As a new decade dawned, Depeche Mode looked on top of its game, if not the world. Their sold-out 1989 tour had the band's coffers overflowing with filthy lucre. Their 1990 album, Violator, was a Top 10 smash on the strength of singles "Enjoy the Silence" and "Personal Jesus." But the end of the century would bring the band to the brink of destruction. After the release of the multi-platinum Songs of Faith and Devotion, things began to unravel. Tensions within the band caused Wilder to split in 1995. Gahan (by now living in L.A.) had developed a nasty heroin addiction, which culminated first in a highly publicized suicide attempt, then in a near-fatal cocaine and heroin overdose.


Incredibly, the group bounced back first with 1997's Ultra and now with Exciter. Those angst-ridden suburban kids that first opened their hearts to Depeche Mode are all grown up now. But clearly, the angst is still there. And the guys in Depeche Mode are still hanging in there with them, reaping the benefits of perseverance and an unflinching faith in a shared musical vision.

On Top of the World


The pilgrimage to the top of Kellogg's SILVER MOUNTAIN to check out the cool summer tuneage of the Blues, Brews & amp; Reggae Microbrew Festival begins, fittingly, with a moment of Zen. I'm speaking, of course, about the sublime gondola ride (complimentary with your event ticket) that takes you slowly up to the open-air amphitheater at the 5,700-foot level. Climb aboard. Feel the air grow steadily cooler as you rise from the valley below. Soar over houses, trees and mountain trails. In the near-silence, take in the vista expanding behind you: sweeping views of three states and Canada, with mountain ranges stretching to the horizon. When you arrive and step out onto the mountaintop, you feel a million miles away from your less-than-lofty, cramped, hot daily existence. Ah, tranquility, at long last you have found it.


The seventh annual event -- the official kickoff to Silver Mountain's Wells Fargo Summer Concert Series -- reestablishes the festival as a predominantly blues-y affair. One of the Northwest's favorite sons, Curtis Salgado, will perform along with reggae artist Clinton Fearon and the Boogie Brown Band. And what would a blues festival be without the brews? Once again, more than 20 breweries from all over the Western states will be on hand entreating you to sample their wares -- some 40 varieties of sweet, delicious intoxicating beer. Your festival ticket buys you six three-ounce tastes and a souvenir mug (tip: getting chummy with the brewery reps might get you extra swigs -- badgering them definitely will not). After your freebees run out, you're on your own at a measly 50 & cent; a taste.


And musically speaking, blue-eyed rockin' soul just doesn't get much better than Curtis Salgado, who has dedicated his career to the preservation of soul music. His definition is broad, encompassing more than just blues and gospel derivations.


"My music is a hybrid of all the stuff that I admire," he says. "I like Jazz and blues and soul and gospel and country western. I Just play what's in my head, and I try to piece the song together, and for whatever reason, it usually comes out as hard-ass rhythm and blues."


Salgado is known to longtime Spokane blues lovers as the voice and mouth harp for late '70s version of the Robert Cray Band, which frequently gigged around town. Later he led such notable touring outfits as In Yo Face, the Stilettos and Roomful of Blues. His resume also includes a Hollywood credit of sorts. He inspired blues fan John Belushi to create the "Jake Blues" character from the movie The Blues Brothers (the Blues Brothers' album, Briefcase Full of Blues, is dedicated to Salgado). More recently, the Curtis Salgado Band has kept the authentic R & amp;B flowing at regional clubs and festivals.


On his latest album, Soul Activated, Salgado flirts with funk (on Leon Russell's "I'd Rather Be Blind"), serves up Jimmie Cliff's reggae hit, "The Harder They Come" with a Memphis R & amp;B twist and lets loose his formidable harmonica chops on the original composition, "Lip Whippin."


On Tuesday, alternative rockers, Smash Mouth (known for the hits "Walking on the Sun," "Can't Get Enough of You Baby," "Then The Morning Comes" and that infuriatingly ubiquitous "All Star") take the hill with local funk/ska/what-have-you ensemble Civilized Animal. The show starts at 7 pm and tickets are $26.


Later in the series, a country breeze will waft through the amphitheater with the appearance of Collin Raye on Aug. 18. Tickets are $22.50-$28.50. On Aug. 19, Too Slim and the Taildraggers open the show for those wild-eyed Southern boys, .38 Special, who will then proceed to rock you into the night (though the show starts at 3 pm). Tickets are $22.50-$28.50. The festival concludes on Sept. 1 with prefabricated boy vocal group, O-Town (whose calculated corporate formation was documented on the ABC reality series Making the Band). Tickets for this 3 pm show are $24.


and Clinton Fearon will be held at the Silver Mountain Amphitheater on Saturday, July 28,

So Long to the BOM


For local songwriter/performer/inexhaustible ball of energy, Tiana Gregg, THE BABES OF MUSIC SERIES that graced the Blue Spark stage over the past few months was more than a mere diversion -- it was a mission. The goal was to draw local women musicians with an itch to perform (but may, for whatever reason, be a tad reluctant) to get up and kick out the jams in front of a receptive, slightly tipsy audience. Judging by the response of musicians and patrons alike, the series more or less accomplished its objective.


Check out the BOM's final installment TONIGHT, Thursday, July 26, featuring a lineup bursting with local talent (where they're gonna put everyone is anyone's guess). Scheduled to perform are (yes, I realize there are a lot of guys in here) Playful Ducks, Don Giese, Brian Reese, Jeanine Leach, Bo Campbell, Dave Turner, Brian Brunk, Ann Olson and your master of ceremonies, Tiana. 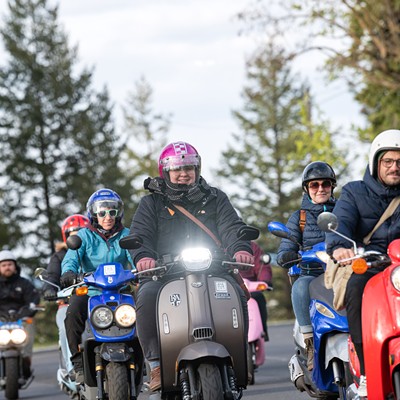